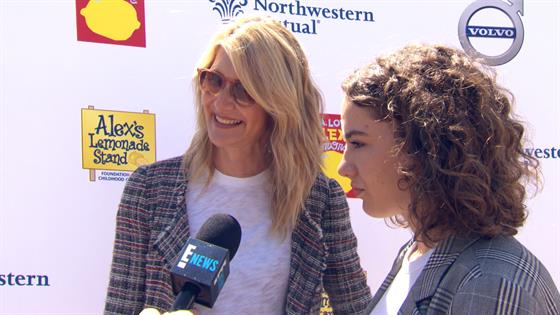 She will not NOT win at the E! People’s Choice Awards!

E! News caught up with Laura Dern on Saturday at the L.A. Loves Alex’s Lemonade event at UCLA to congratulate the star on Big Little Lies‘ PCAs nomination for The Drama Show of 2019.

The actress, who plays the iconic and insanely quotable Renata Klein on the series, was much more humble than her fictional counterpart saying, “I mean, I can’t tell people what to vote for!”

She continued, “I mean, vote for what you love and if you love Big Little Lies, you better be voting!” Her daughter, Jaya Harper, kept pointing to her mom, indicating who she wants to see win the award!

From dancing to Diana Ross‘ “It’s My House” in a red power suit to leaving her cheating husband on the side of a highway, there are plenty of Renata Klein moments that could sway your vote in the show’s direction.

If you want to show a woman a little respect, you can vote for the show on the E! People’s Choice Awards website or take to Twitter to sound off!

Superfans of the HBO show can also celebrate because one member of the Monterey Five is also individually nominated. Reese Witherspoon‘s portrayal of Madeline Mackenzie nabbed her nominations for both The Female TV Star and Drama TV Star of 2019!

Be sure to tune into the PCAs live show on Nov. 10 to see if the women take home the award.

To see the full interview with Dern, watch E! News at 7.