Liberals fear influence of right-wing church ahead of preselection

Fears are growing within parts of the Liberal Party that members of a radical church accused of historic links with gay conversion therapies are making a bid to enter Victorian politics.

Several MPs and Liberal Party officials, speaking to The Age on the condition of anonymity, are warning next month’s preselection showdown for the Eastern Victoria Region will be a battleground for conservative forces with a member of the conservative City Builders Church seeking to replace Victorian Liberal MP Edward O’Donohue. 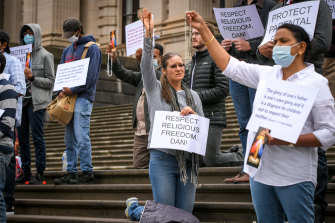 Dr Heath is a member of the City Builders Church, which is led by her father Pastor Brian Heath, and has been accused of encouraging members of its congregation to take part in the Living Waters Program, an externally-run gay conversion “therapy” which has since closed.

Mr Heath has denied he endorses gay conversion therapy but recently told a podcast that the church had in the past helped members of the congregation who suffer “sexual brokeness” to find solutions.

Laws to ban gay conversion therapy passed Victoria’s upper house in February, making it illegal to try and suppress or change an LGBTI person’s gender or sexuality, including through faith.

According to several Liberal sources, Dr Heath has told branch members she is opposed to conversion therapy but remained concerned about any potential consequences of the legislation. Several delegates who have been contacted by Dr Heath said she was forceful in her defence of the separation between church and state, telling them, “politicians need to do politics”.

The Coalition was initially divided on whether to support a ban on gay conversion therapy when it appeared before Parliament late last year but the Liberal and National parties ultimately decided to support the change and have since given an “iron-clad guarantee” not to amend the laws.

That pledge has caused some division within the state party with at least three MPs – former minister Kim Wells, Forest Hill MP Neil Angus and outspoken conservative Bernie Finn – seeking to discuss the policy further ahead of the next sitting week.

Grassroots Liberal members are expected to meet next month to pick a replacement for Mr O’Donohue with Dr Heath one of four contenders hoping to fill the vacancy. 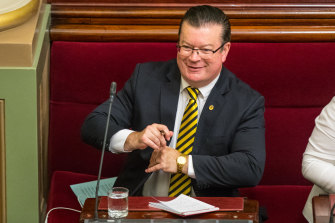 Author and magazine journalist Sue Smethurst, as well as two councillors, Cr Steve Holland from the Mornington Peninsula Shire and Catherine Burnett-Wake from the Yarra Ranges council have also been linked to the Legislative Council race.

Party officials are planning to hold a hybrid preselection, in keeping with COVID-19 rules, which will allow a selection of rank and file members to cast a vote over several sites on the same day.

One senior Liberal Party source, speaking to The Age on the condition of anonymity, said Dr Heath’s selection would be “problematic” for new leader Matthew Guy due to her association with the conservative church.

Several senior members of the City Builders Church based in Sale took high-profile roles in the anti-same sex marriage campaign and resisted changes to laws banning conversion therapy. Pastor Brian Heath did not speak publicly on the issue during the parliamentary debate. One church member speaking to The Age on the condition of anonymity said members of the congregation had raised concerns about the impact the ban could have on their religious freedoms and parenting. 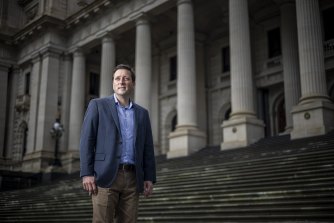 The Christian right might be a problem for Matthew Guy, insiders say.Credit:Wayne Taylor

The church is one of several conservative congregations targeted in recent years by Liberal Party recruiters looking to expand the influence of the conservative right.

“They have joined in droves, and it will be a big problem for Matthew,” one Liberal Party official told The Age.

“They have caused huge problems down there, and it won’t help come election time.”

The National Party has also raised concerns about the church’s influence in local politics following a jump in the number of affiliated church members joining local branches and a recent push by one senior church figure to run for a position as a party official.

Dr Heath was contacted by The Age but candidates are prevented from commenting due to party rules.