It was the Regency bonk-fest that showed the upper classes unbuttoning their breeches and raising their petticoats as they swung from library ladders. We couldn’t get enough of Bridgertonand soon we can sate ourselves with A Very British Scandal.

Yet this new drama about Margaret Campbell, the Duchess of Argyll, partly set in a fairytale turreted Highland castle, isn’t escapist fantasy. It is based on a true story that shocked Britain in the 1960s. The television adaptation, which stars Claire Foy and Paul Bettany, focuses on the bitter divorce of the Duke and Duchess of Argyll, which dominated the front pages when the beautiful, charismatic Margaret was accused of having a voracious sexual appetite.

Polaroids of her being intimate with a “headless man,” on her knees before him, came to define her legacy. The judge, who ruled in the Duke’s favour in the 1963 court case, concluded that the duchess “was a highly sexed woman who had ceased to be satisfied with normal relations and had started to indulge in what I can only describe as disgusting sexual activities”. 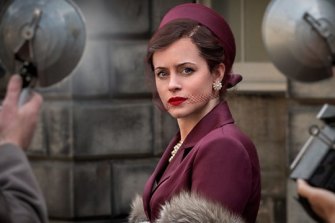 Plus ca change. Throughout the ages from courtly love, the medieval, highly conventionalised code that prescribed the behaviour of ladies and their lovers; through the historical romping that went on at Versailles, where the Sun King, Louis XIV, slept his way through his entire royal court; to the Edwardians and their bonking Bloomsbury set, the nobility have always displayed a laissez-faire attitude to adultery.

As Sarah Phelps, scriptwriter on A Very British Scandal, put it: “The basic problem is that they have way too much time on their hands and they are all about dynastic marriages, and they get bored of each other and go to house parties where they always see the same people and they steadily work their way through each other’s husbands and wives.”

With their rock-solid sense of self and breezy entitlement, the aristocracy has always considered themselves above conventional rules. This is a tribe conditioned to get away with whatever they want, so they revel in their form of sexual anarchy. Eccentricity is inbred into their DNA, which is why Phelps is right: libidinous toffs are a TV tonic for the rest of us.

“Aristocrats have always bonked like crazy simply because it is fun,” says society designer Nicky Haslam. “The lower classes bonk for necessity, whereas in an aristocratic marriage, once you have provided the heir and spare, you don’t need to procreate. They simply go off and have sex with everyone, which is why there are so many illegitimate offspring in those circles. It’s not about boredom, it’s about a show-off quality among the upper classes who go to shooting parties and talk about who they have got their leg over with. It’s to do with position and a power play. ‘We do it because we can.’ This attitude is bred into upper-class thinking.“

What shocks the aristocracy is not adultery or even being caught, but any form of chagrin over their promiscuity.

In fact, the nobility scoff at any suburban condemnation of their liberal sexual mores because adultery is an accepted part of their existence. When one of the Duke of Windsor’s lovers, the married Freda Dudley Ward, was asked in the late 1930s if her first husband, William Dudley Ward, minded about her affair with the Prince of Wales, she replied “Oh, no. My husband knew all about my relationship with the prince. But he didn’t mind. If it’s the Prince of Wales, no husbands ever mind.” 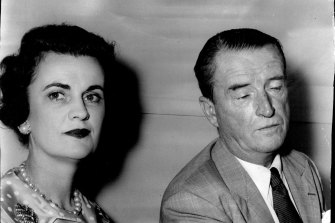 The Duke and Duchess of Argyll at the time of their bitter divorce.Credit:Fairfax Media

John Julius Norwich once said to me about his father Duff Cooper, who married Lady Diana Manners (and was friends with the Duke and Duchess of Windsor), “my papa had an extremely good reputation for womanising”.

It was expected, explained Lord Norwich, that bed-hopping happened in aristocratic circles and at house parties where corridor creeping was de rigueur, guest rooms were chosen with the illicit – or not so illicit – affair in mind. Perhaps part of the reason for their relaxed attitude to sex is all that stately space. For those of us without east wings, multiple guest bedrooms, second staircases and parkland with follies for frolicking in, adultery is more complicated to achieve.

In the Georgian and Edwardian eras, when many of these stunning piles were built, the aristocracy took a relaxed approach to sex. It was Jane Austen’s characters, reflecting the respectable middle classes, who behaved primly. A few years ago, the British Library bought the personal papers of the influential Granville family, which had been kept in their London home, Devonshire House, since the early 19th century. Among the revelations was a forthright letter sent in 1809 to Harriet Granville, daughter of the celebrated socialite Georgiana, Duchess of Devonshire, which seems to sum up the mores of the day. Written by her aunt (also called Harriet), it informs the younger Harriet that her dashing new husband, Viscount Duncannon, later third Earl of Bessborough, is her aunt’s former lover and father of her two illegitimate children.

Meanwhile, Harriet may have married Viscount Duncannon aged 19 but throughout her marriage, she conducted a 17-year love affair with Lord Granville Leveson-Gower, a dandy with brilliant blue eyes. In tight society circles, everybody is intertwined and such letters reflect women trapped in their marriages, while their illegitimate children were brought up elsewhere.

In the 1940s, the actress Mrs Patrick Campbell, who married into the aristocracy, was the first to play Eliza Doolittle in George Bernard Shaw’s Pygmalion. She described marriage as the “deep peace of the double bed after the hurly-burly of the chaise longue”. She had yet to learn from Professor Higgins that among the upper classes, the security of peace in your own marital bed is considered boring and below-stairs.

More recently, in the mid-1990s, Tory MP Alan Clark, who inherited Saltwood Castle in Kent, had an affair with family friend Valerie Harkess and her two daughters. Clark referred to his three Harkess lovers as “the coven”. When condemned for “womanising,” Clark was offended. “I hate that verb,” he said. “I’m far more eclectic than that.” And he was. After seducing a “plump young lady” on a train, he confided in his diary: “Bonking on a train? I honestly don’t think the public would mind. I don’t see how it could.”

That’s what separates them from us; genuine astonishment that any of their aristo antics could cause offence. Notions of love and loyalty are different. Maybe toffs aren’t actually having more sex than anyone else, it’s just that with their backdrop of Georgian boltholes it seems more glamorous. And, lucky for us, it makes for much more salacious on-screen viewing.

A Very British Scandal is expected to air on Amazon Prime in April.