Like his ‘doppelganger’ George Clooney, this economist seeks a new act

Chris Richardson may be the only economist in the country who reckons he and George Clooney were separated at birth.

Richardson certainly appears on the nation’s televisions as much, if not more, than his American superstar “doppelgänger” as he explains the ins and outs of federal budget policy or Australia’s economic challenges. 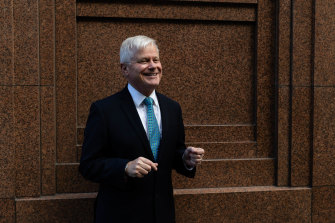 And, just as Clooney has moved between acting, writing and directing, Richardson is preparing for a new role.

From Wednesday, Richardson will be hanging out his own shingle after more than three decades as the public face of Access Economics and its successor, Deloitte Access Economics.

The move is part giving room to Deloitte – the nation’s largest home of private-sector economists – and also to effectively move from analyst to advocate.

He says “no” has become the go-to word for politicians, governments and communities. That resistance is a direct threat to the quality of life for all Australians.

“The biggest issue is that it’s getting really hard to change anything in Australia,” he says.

“It’s so easy to say no. We’ve got to a situation where just saying no gives you political success but it means we go nowhere.”

“My job has always been to explain the policies that are being proposed and where the economy is headed. I think most people in Australia agree on where should head, but there’s not much agreement on how to get there.”

The issues put in the too-hard basket for the past 20 years or so could make or break the Australian economy.

It’s such a long list because problems have been put off by successive governments – federal and state – which have been cowed by increasingly loud opponents to any sort of change. They were barely touched upon in the just-completed federal election campaign.

“I’m not saying that we’re facing the end of the world. We’re really a lucky country but there are major changes that have to be made,” he says.

“Governments and oppositions now count success in terms of yelling abuse and labelling their opponents as evil or out of touch or corrupt. We’re lacking genuine cross-party friendships.”

For a man who believes there needs to be real policy debate and change, Richardson also argues our politicians get a rough time from their many critics.

He says governments have been at their finest during periods of crisis, citing both the pandemic recession and the global financial crisis.

The problem is a failure to compromise across the entire community.

A time to listen closely to politicians – from all sides of the spectrum – is right now.

“The most truth the voting public hears from politicians is right after an election, especially when there’s a change of government and they have an incentive to be completely upfront,” he says.

After joining Treasury in 1983 on a $6000-a-year cadetship, he moved to the new Access Economics in 1988. It was there he started to develop his reputation for explaining difficult economic concepts in a way understood by a non-economic audience.

Economics is known as the “gloomy science”. Richardson explains it in technicolour.

Just ahead of this year’s budget, he said it was time to start repairing the budget in his own, Richardson sort of way.

The “lamington”, in this case, was the low and middle-income tax offset that was supersized in the budget as a cost of living measure despite Richardson’s warnings.

He also noted “Australia’s dumbest budget decisions have occurred at times when a government was headed for an election while being way behind in the polls”.

Richardson has delivered his comic iron fist in a velvet glove to both sides of politics. Ahead of the 2010 budget he was using party analogies to explain what was facing Labor’s then-treasurer, Wayne Swan.

“The economy may be back in party mode, but the huge policy costs of recent years – the stimulus and eight tax cuts in a row – mean it will be a while before the budget is dancing a jig,” he said.

The budget, facing a decade of deficits and debt beyond $1 trillion, never did get its dancing shoes back on.

Now 61, Richardson and wife Cathy have moved to Sydney from where he will run his one-man consultancy, Richinsight.

Part of the decision for the move is the success of independent economists such as Saul Eslake (a former chief economist at ANZ) and Stephen Koukoulas (from TD Securities who also worked as an adviser to Julia Gillard during her term as prime minister).

Both are in the public eye, agitating for policy change through the lens of economics.

“These are people trying to do the right thing,” he says. “I am very much looking to [fight] the good fight.”

Among Clooney’s many roles, the closest to Richardson would be his portrayal of Fred Friendly, the co-producer to crusading American journalist Ed Murrow in the film Good Night, and Good Luck.

In that film, Murrow and Friendly directly challenge the views of controversial American senator Joe McCarthy and his witch hunt against communists inside the US government.

Richardson may be about to follow in Clooney’s footsteps.