Adults with debilitating spinal muscular atrophy will for the first time have access to a subsidised treatment that has been available only to children.

From August 1, the gene therapy Spinraza (nusinersen) will be listed on the Pharmaceutical Benefits Scheme for adults with SMA. 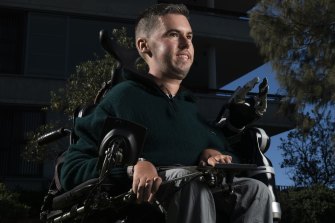 Daniel Michel says treatment has helped him retain his quality of life.Credit:Rhett Wyman

Roughly one in 6000 to 11,000 people are born with SMA, a rare genetic disease caused by a shortage of a protein called survival motor neuron (SMN). Without this protein, muscles become weak and waste away, including the muscles used for breathing and swallowing, the shoulders, hips, thighs and upper back.

“Until now, there have been no treatment options available for adults living with SMA,” Health Minister Mark Butler said. “Without this PBS listing, families would be well over $300,000 per year for Spinraza … the cost will now be just $42.20 per script, or $6.80 with a concession card,” he said.

Spinraza is a type of gene therapy that targets the SMN2 gene, making it generate more SMN protein.

Since 2018, the drug has been available on the PBS for children whose SMA symptoms began before their third birthday, and for infants who test positive for the condition before they develop symptoms since 2020.

“There’s this misconception that SMA is a childhood disease,” Michel said. “This PBS announcement is a testament to the adult SMA community, the fact that we exist, and we want access to treatment options.”

The Tokyo Paralympics bronze medallist has been in a wheelchair since he was five years old and relies on other people for daily tasks including eating, showing and dressing.

“I can’t walk, but I make sure SMA doesn’t hold me back from living my life to the fullest,” he said.

Michel is one of a handful of adults with SMA who have been administered Spinraza as part of manufacturer Biogen’s compassionate access scheme.

“I just want to maintain the function that I have. That would be fantastic, and continue to live my life the way I do,” he said.

Professor Matthew Kiernan, co-director of the Brain and Mind Centre, University of Sydney, said for an estimated 650 to 800 people with SMA in Australia, their lives become a progressive battle against time to preserve quality of life and independence.

Spinraza has been life-saving for children with the most severe type of SMA whose life expectancy without treatment was two years of age. The drug prevented and reversed declines in the motor function of these children — some now school-aged — so that they can breathe and swallow by themselves, and most can walk with assistance.

Kiernan said the drug would not have the same dramatic effects in adults, but it would give them the hope of gaining some muscle function back or maintaining function.

“It’s hard to know how much effect [Spinraza] will have, but this is still a good news story,” he said. “It might mean they can continue to use their hands to operate their electric wheelchair, type on a computer and maintain their employment,” he said.

It could also be life-saving by improving their respiratory function, considering the chief cause of hospitalisation and death for these patients were respiratory viruses, Kiernan said.

The treatment involves injecting the drug into the spine via lumbar puncture. It is a difficult and uncomfortable procedure for adult SMA patients, who often have distorted spines, involving CT guidance to find a gap in spinal cord muscles.

“We are going to have to monitor these patients on Spinraza and rely on them to tell us if their condition is improving,” Kiernan said. “They will be the judges of whether they want to continue the therapy.”

Australians can access free preconception carrier screening to determine if they have the mutation that causes SMA. Newborns are routinely screened for the condition and children have access to three types of treatments on the PBS (Spinraza, Zolgensma and Evrysdi).

The federal government expects 100 patients will be prescribed Spinraza per year.

“For the first time ever, adults with SMA can choose to have this medicine. They get to decide,” she said.

“It gives them hope and the change to improve their quality of life, which is just incredible news,” she said.

Liam Mannix’s Examine newsletter explains and analyses science with a rigorous focus on the evidence. Sign up to get it each week.