Millions of dollars in tax breaks will flow to the Australian TV and film industry after the federal government capitulated to Labor’s demands and abandoned its attempts to tighten rules as it increased tax rebates.

The government’s package tried to increase the TV producer offset rebate from 20 per to 30 per cent, while making certain productions ineligible. But fearing a revolt from a volatile backbench, it agreed to amend its bill to deliver a more generous package of financial incentives to more productions, rather than risk losing a vote in the lower house. 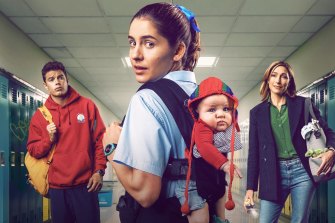 Australian TV productions like Stan’s Bump will benefit from increase tax breaks under changed passed by the Federal Parliament.Credit:stan

The government also walked away from a proposed increase in the threshold for producer rebates from $500,000 to $1 million – a move the screen industry argued would have financially damaged smaller operators, documentary makers and the post-production industry.

The opposition declared victory on Wednesday after the debate over the bill devolved into political brinkmanship, claiming it had forced the government into a “humiliating backdown”.

“The government has now adopted Labor’s changes because it knew it did not have the numbers in the lower house.”

The resolution means the centrepiece of the federal government’s package – the increase in the TV producer offset rebate – will be implemented and backdated to July 1. The screen industry has been desperately awaiting the passage of the measure, estimating $400 million in productions were on the line.

Earlier on Wednesday, Communications Minister Paul Fletcher warned the government would not accept the amended bill, which was backed by the Senate crossbench and accused Labor of derailing access to much-needed funding that would become available through the increased producer offset.

“The bill will pass as a whole, or not at all,” Mr Fletcher said. “Production companies have already taken loans on the basis of the increase in the offset from 20 to 30 per cent. If the additional funding through the producer offset is unavailable or delayed it will threaten the continued production of projects in Australia.”

But with one sitting day left, the government cut its losses rather than risk defeat or further delaying the industry’s access to the increased producer offset until next year.

“The passing of the laws will unlock rich new streams of financial support into the sector, and is the culmination of years of effort. It’s also an important day for Australian audiences, with the boost in the offset an important part of securing the future of Australian stories on the small screen,” Mr Deaner said.

He said the amendments made during the debate “wind back some potentially challenging reforms which would have made accessing financing support harder for a range of producers in our sector”.

The post-production and visual effects sector, which had argued 400 jobs were at risk by the proposed threshold changes, celebrated the backdown.