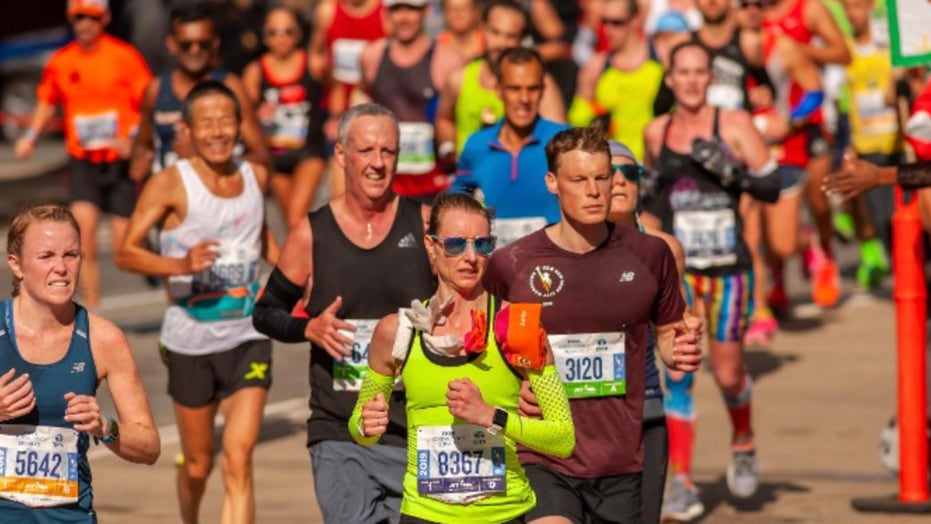 What race organizers are saying on the cancellation of the NYC marathon due to the coronavirus pandemic.

Catch her if you can.

Elite runner Sara Hall won second place in the women’s division of the virtual London Marathon this year, crossing the finish line at 2:22:01. The 37-year-old said faith, rather than fear, fueled her fire while training amid the coronavirus outbreak, which completely upended the traditional racing circuit.

The marathon itself was originally scheduled to take place on April 26, but officials were forced to postpone the race until Oct. 4. Further changes included the exclusion of anyone not deemed an elite runner, and the use of a smaller track with multiple laps, rather than the traditional citywide route.

Hall admits the changes were a bit daunting at first — as was the future of her chosen sport — but she somehow managed to stay positive, and in top physical form, amid a pandemic. 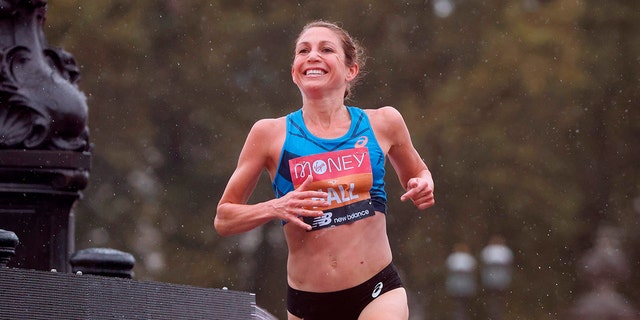 American runner Sara Hall sprints to the finish of the women’s race of the 2020 London Marathon in central London on October 4. (JOHN SIBLEY/POOL/AFP via Getty Images)

The professional athlete recently spoke with Fox News about the previous challenges that pushed her to the podium, as well as her thoughts on how the ongoing outbreak changed everything — and how she now stays motivated while training for virtual and in-person runs.

FOX NEWS: How has COVID-19 changed racing and training?

Sara Hall: This was a year unlike any other as an athlete. It was challenging to not have any races for such a long stretch of time. My last race was the end of February at the U.S. Olympic trials, and that was actually the biggest disappointment of my career, not making that team. I was hoping to just refocus towards more races and use that fitness I’d built towards future races, but then everything was just canceled, including the U.S. track trials in June, which would have been my other shot at making it to the Tokyo Olympics.

It was difficult to stay motivated at times and intrinsically motivate myself, because usually these races provide benchmark of where you’re at. I had no idea if I was going to be able to do any races in 2020, but fortunately, I was able to just keep grinding and keep the faith. I actually started training for a marathon before I even knew London was going to be putting on the race… just in faith that there would be an opportunity. 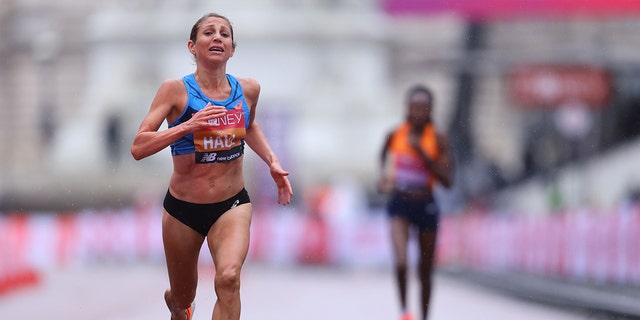 US’ Sara Hall (L) sprints away from Kenya’s Ruth Chepngetich (R) at the finish of the women’s race of the 2020 London Marathon. (RICHARD HEATHCOTE/POOL/AFP via Getty Images)

FOX: Do you think virtual racing will influence competitions of the future?

FOX: As a runner, how important is it to have competitions on the calendar?

Hall: It’s really important! That’s what gives your training purpose, and that’s the fun part of running — getting the chance to compete and test yourself against other people. It’s great to do virtual races in the meantime, but you’re never going to fully get the most out of yourself as when you’re being pushed by others. In the finish of London, I was sprinting down the world champion to give second place, and that just pulled up the best race I’ve ever done, having her to compete against.

“I just kept focusing on ‘What can I do my best with, right now?’ and that led to the biggest breakthrough of my career.”

CORONAVIRUS IN THE US: STATE-BY-STATE BREAKDOWN

FOX: What did you learn from the London Marathon?

Hall: This whole buildup has taught me to learn to thrive right where you’re at. It was challenging in so many ways – I have four kids, and they were doing school at home – but I just kept focusing on, “What can I do right now? What are the opportunities in front of me? What can I do my best with right now?” And that led to the biggest breakthrough of my career.

In the race itself, I was experiencing discouragement. I was in the worst position you could possibly be in the marathon, I ran almost every step of it alone, until the end, when I was catching people. There were times that I was fighting to stay positive, but I just kept telling myself, “I’m so thankful for this opportunity to race, at a time when there’s no races. I love racing.”

And that gratitude kept me moving forward, and kept me in the position where I could get onto the podium later in the race.

I think that’s just a great image for this year — gratitude. And focusing on doing the best with what you can do every day, to move forward through this time. US runner Sara Hall (L), winner, Kenya’s Brigid Kosgei (C) and third place Kenya’s Ruth Chepngetich (R) pose for a photograph with their trophies in front of Buckingham Palace after the women’s race of the 2020 London Marathon on October 4. (JOHN SIBLEY/POOL/AFP via Getty Images)

FOX: What kept you motivated while training during lockdown?

Hall: [A lot of it was] continuing to see my potential… I’m 37, so it’s kind of unusual to still be improving at this age, but I am absorbing training the best I ever have. I wanted to just keep putting in the work to reach new levels, and see how far I can take it.

It took a lot of faith that what I was seeing in training would eventually get manifested in a race.

FOX: Do you have any training tips for recreational runners preparing for virtual races? You set a personal record with a half marathon this summer at 1:08:18, which Runner’s World heralded as the “sixth-fastest” for an American of all time.

Hall: The half marathon in Eugene in August was kind of like a time trial by myself, with a couple other guys helping pace me.

As much as you can kind of create some atmosphere for yourself, whether it’s a good playlist or having someone bike in front of you and go the pace you want to go, or with a training partner, those kinds of things are key and helped me out there. 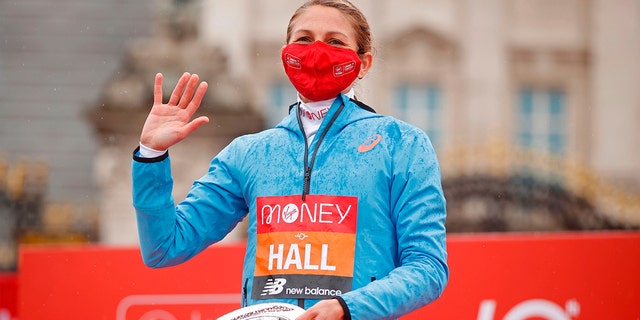 Hall poses for a photograph with her trophy in front of Buckingham Palace after the women’s race of the 2020 London Marathon in central London on October 4. (JOHN SIBLEY/POOL/AFP via Getty Images)

FOX: What goals are you focusing on next?

Hall: I’ll be participating in the ASICS World Ekiden [in November.] My very first professional race was an Ekiden, and I love the concept of that – the marathon distance broken up into the legs – and that will help keep me motivated during this time. I’m also hoping to run another race before the end of the year, so I’m seeing what opportunities are out there.