The jobless rate fell 0.1 percentage points to 3.4 per cent in October, a day after data showed annual wages growth of 3.1 per cent. Once inflation is taken into account, real wages fell 4.2 per cent over the past year. 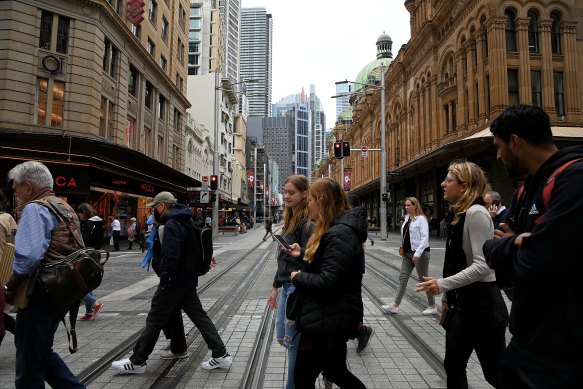 The unemployment rate has been 3.5 per cent or lower for five consecutive months.Credit:Kate Geraghty

As the Senate prepares to debate the government’s Secure Jobs, Better Pay bill, Burke said the figures were proof wages would not accelerate enough without his industrial relations changes.

“We now have what was meant to be the key in getting wages moving – sustained, low unemployment – and we’re still in a position where Australian workers are going backwards and where real wages today are lower than what they were a decade ago,” he said on Thursday.

“[Wages] should be at a figure higher than 3.1. That won’t happen unless we change the law and the key way to get flexibility and productivity outcomes from business while at the same time getting better wage outcomes for workers is to get bargaining moving.”

But opposition employment and workplace relations spokeswoman Michaelia Cash said the IR legislation, which Burke hopes to get through parliament over the next fortnight, would jeopardise the strong jobs figures.

“Should these changes pass the parliament, these record low unemployment rates will one day be a distant memory,” she said.

Economists said the jobless rate, which has been 3.5 per cent or lower since July, had “essentially hit a floor” and would give the Reserve Bank more confidence to lift the cash rate again in December as it tried to cool the economy and reduce inflation.

The unemployment rate dipped 0.1 percentage points to 3.2 per cent in NSW and 3.4 per cent in Queensland, while Victoria and Western Australia were steady at 3.5 per cent.

Commonwealth Bank chief economist Gareth Aird said the jobs data “essentially rubber stamps” a further quarter percentage point increase in the official cash rate next month, which would take it to 3.1 per cent.

“The unemployment rate has essentially hit a floor and the labour market is very tight. As a result, wages growth has finally accelerated in a meaningful way,” he said.

“The challenge now for the RBA is to cool demand in the economy such that the labour market loosens a little, but not too much.”

Callam Pickering, the Asia-Pacific economist at employment website Indeed, said the jobs data, and robust wages growth reported by the Australian Bureau of Statistics on Wednesday, showed business demand for labour was still strong despite the RBA’s efforts to cool the economy.

While the figures were in line with the central bank’s expectations, Pickering said the data suggested the economy was a bit stronger than forecast at this point.

“Both employment and wage growth have come in hotter than expected this week,” he said.

“Potentially that could put some upward pressure on inflation – or at the very least make it a little more difficult to bring inflation down – which might warrant more aggressive policy moves next year.”

EY chief economist Cherelle Murphy noted it was the fifth successive month that unemployment had been 3.5 per cent or lower.

“From here we don’t expect the labour market to strengthen,” she said. “For businesses, higher input costs and pressures on their customers plus higher interest rates mean the demand for labour will plateau before eventually weakening.”

That softening would lead to a rise in unemployment, which is what the RBA wants to see to get inflation back down to its target range of 2 to 3 per cent. Inflation is currently sitting at 7.3 per cent and expected to reach 8 per cent by Christmas before easing through 2023.

ABS head of labour statistics Bjorn Jarvis said the participation rate of 66.5 per cent was still 0.7 percentage points higher than before the COVID-19 pandemic. The underutilisation rate – a combination of the unemployment and under-employment rate – fell to 9.3 per cent, its lowest level in 40 years.