Congrats to Lauryn “Pumpkin” Shannon and Joshua Efird on the exciting baby news!

The reality star, 21, and her husband are expecting their second child together in July, according to People. They also share 3-year-old daughter Ella Grace.

“We weren’t really expecting. We also weren’t trying either, but we weren’t preventing,” explained Lauryn to the outlet. “Everybody knows Ella’s 3 now, so it’s taken me that long to get pregnant. Because for a while, I was on birth control and then I got off of birth control for a year and a half. And then I found out that I was pregnant.”

She went on to say the news was “definitely a shock” as recent pregnancy tests kept coming back negative.

Right before discovering they were pregnant, the couple had even come to terms with Ella Grace being an only child. “Ella may just be our one and it just being us and we’re going to be okay,” Lauryn recalled thinking.

She also touched upon how her younger sister, Alana “Honey Boo Boo” Thompson, is handling the news, as Alana has been living with Lauryn, who became Alana’s guardian after their mother, “Mama June” Shannon, went MIA during her addiction struggle.

“I think Alana is excited, but Alana also kind of feels like a burden only because now we have Ella and she wants us to be able to move on with our life,” Lauryn revealed “And it’s like, those aren’t the things that you should have to be worried [about].”

Meanwhile, on the latest episode of “Mama June: Road to Redemption,” Lauryn and Alana reunited with June for the first time in a year. Lauryn spoke about the reunion to TooFab, explaining how she took care of Alana while June and her boyfriend Geno blew through $1 million in a year on drugs.

“When we meet this time on the show, it had be a year since we had physically seen her,” said Lauryn. “So that’s hard to hear. I mean it really is, knowing that — not trying to sound mean and not trying to sound money hungry — but to know that me and Josh were struggling trying to do everything we could to keep a roof over Alana’s and Ella’s head. It’s just like, but you were out here blowing a million dollars and you couldn’t help me?'” 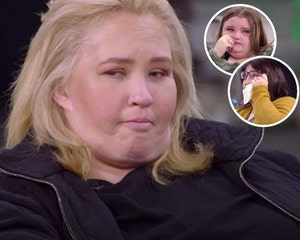 She also explained how she isn’t sure June really comprehends just how big an effect her drug use had on their family.

“I don’t think that she still fully understands the problems she left behind for me, because having to take care of Alana, I feel like she’s appreciative of it, but I feel like the way that she says she’s appreciative of it … I want it to be a little more sincere than that,” said Pumpkin. “It’s very tough because somebody who was supposed to be there and supposed to be supportive, it just doesn’t seem that way. I’ve done all these things and I’ve matured as a woman and now I gotta take the consequences and I wasn’t even the addict.”

“It’s not like, okay I just take care of Alana. Like, I have to go through my marriage problems, that caused problems there,” she added. “It basically caused a whole uproar in everybody’s lives, and it’s just like, she sees it, but she doesn’t see it.”