Single man sends woman, 25, a 10-page PowerPoint presentation on why they should date after matching with her on Hinge: ‘What a legend’

A eligible bachelor has ‘set a new standard’ for single men by sending a woman a PowerPoint slide highlighting why they should go on a date.

Psychology student Maddie started chatting to the man on Hinge who was eager to eliminate all competition, and she was impressed.

The 25-year-old from Sydney detailed the conversation in a TikTok video.

‘Basically I said to him, “Look, I’m going to need a pamphlet [or] an info pack before you convince me to going on a date”,’ she said.

After providing her email address he sent over a 10-slide PowerPoint titled, ‘Why you should go on a date with this cutie’, and was complete with photos and brief descriptions about himself. 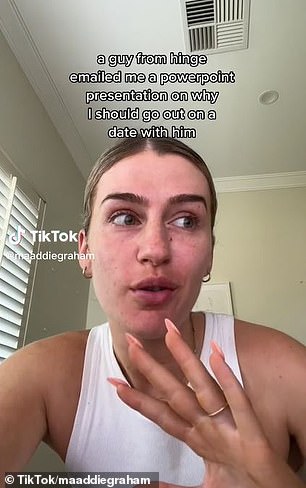 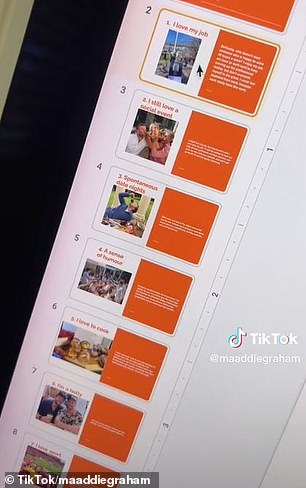 Psychology student Maddie (left) started chatting to the man on Hinge and jokingly said she needed to see a ‘pamphlet or info pack’ on why they should go on a date. To her surprise, he emailed her a 10-slide PowerPoint (right)

‘What a legend, honestly this is the energy I am about when it comes to dating,’ Maddie captioned the video.

On the first slide that read ‘I love my job’, the man wrote: ‘Seriously, who doesn’t want someone who is happy an extra 40 hours a week?

‘I enjoy my job, am keen to work hard to keep moving up the professional ladder, but don’t overwork myself in the grind. I never feel depleted from work because work rarely feels like work.’

2. I still love a social event

4. A sense of humour

10. You can find out the rest later

But while he’s a hard worker, the man claims he ‘still loves a social event’.

‘I might love my job but that doesn’t mean I love only my job,’ he wrote.

‘I’m still excited to head out with all your girlfriends and their partners, can hold my own with your parents, and won’t get so drunk I’ll ruin family Christmas.’

Next, he told Maddie to expect ‘spontaneous date nights’ if she chooses to date him.

‘Make sure you keep a few nights each week free for me, because we’re going on cute dates. Beach picnics, cocktail bars, Sunday markets, we’re doing them all,’ he said.

The man also boasted about his sense of humour and related it to that of television star Hamish Blake’s. 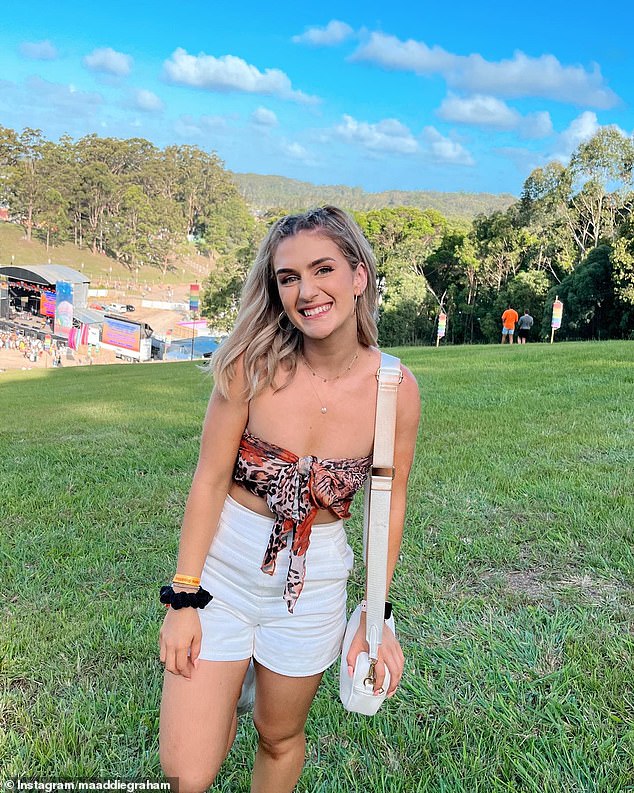 ‘What a legend, honestly this is the energy I am about when it comes to dating,’ Maddie captioned a TikTok video

In his spare time he enjoys cooking and has a love for sports.

‘If I’m not playing sport, I’m watching it, read about it or thinking about it. I wouldn’t call it a red flag, but it shows I’m passionate about things. It also means I’ll go to the gym and runs/walks with you,’ he said.

On slide eight the man hinted at the opportunity to be ‘granted access to events’ through work.

‘I’m not saying I’m a big deal, but my jobs means I can get us into events. Want to go to the grand final? Done. See the F1? Sure. There’s a concert you’re keen on? Maybe, let’s find out,’ he elaborated.

Then he mentioned he’s 6’2 and ‘great at cuddling’.

On the final slide he encouraged Maddie to ‘find out the rest later’ and send him a message. 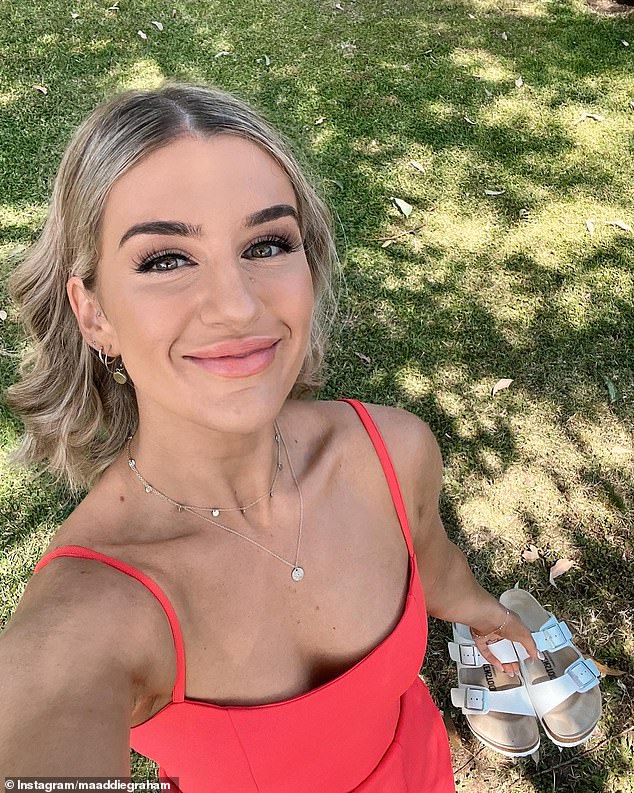 After reading the PowerPoint, Maddie confirmed she accepted going on a date with the man but hasn’t posted an update yet

The TikTok video has since been viewed more than 104,000 times and other women obsessed over the concept.

‘I will need this from every man from now on,’ one woman wrote, another said: ‘A date at an F1 race? He would have me sold.’

‘Great initiative & sense of humour you should definitely go on a date,’ another added.

And Maddie confirmed she accepted going on a date with the man but hasn’t posted an update yet.