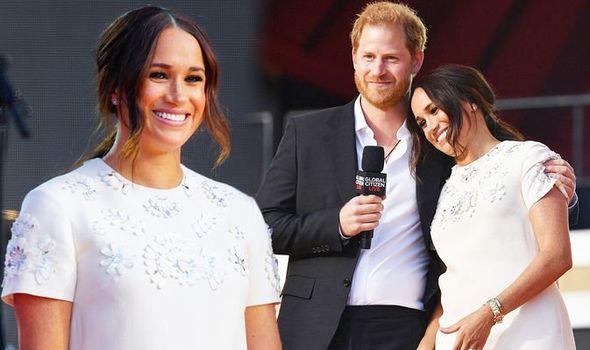 Meghan Markle and Prince Harry spoke to crowds about distributing the coronavirus vaccine to countries in need. However, it was the body language of the royals as much as their words that caught the attention of the audience.

The duo have been in New York since Thursday where they stepped out for their first public appearance together since their move to Los Angeles in 2020.

While they have not been seen publicly for more than a year, they have appeared virtually on many occasions.

Most recently, the couple posed for pictures as they were named among the most influential people by Time magazine.

Judi James spoke about how their appearances on the cover had similarities to how they have been seen in New York.

The expert told Express.co.uk: “Meghan and Harry’s body language on this New York trip seems to have suggested they are keen to present themselves as a serious power couple with a more corporate or even presidential slant, rather than just as a romantic double-act with a royal back-story.

“Their PDAs have been less pronounced and while Meghan has looked like the leader as she did on the Time magazine covers, they have appeared as independently influential rather than as a celebrity or even royal couple.”

Last night, Meghan and Prince Harry took turns to speak on the stage in New York.

However, they also came together to show much more public affection than they have on the trip so far, Judi suggested.

She continued: “On stage here they continued that theme, each holding a mic and taking it in turns to speak, with Harry going first.

“The crowd were having none of it though and this prompted the first really emphatic PDA of their visit.

“Harry referred to ‘my wife’ and at this point the crowd erupted, showing they like their Sussex’s as an openly-affectionate and romantic double act.

“The feedback seemed to make Harry and Meghan melt, gazing at one another, with him placing an arm around Meghan while she leaned her head on his shoulder with both wearing loving and affectionate facial expressions.”

Judi continued to say the Duke and Duchess seemed to appreciate the crowd’s reactions and they appeared “openly affectionate”.

As well as engaging in public displays of affection, or PDAs, the royals displayed their independence by speaking separately.

When doing this, Judi claimed the audience gave an insight to their views on the royals.

She suggested “audience screams” showed Meghan is the “bigger star” and the celebrity side of the couple was “crucial”.

Judi concluded: “They might have tried to double their influence by signalling independent power as well as coupled-up power.

“But the way the audience screamed when Meghan started talking showed who is the bigger star right now.

“And the way the audience roared their approval for the romantic side of their story also showed just how crucial this more celebrity side is too.

“They walked off stage hand in hand with their fingers meshed, openly showing their affection for one another as they did so.”