Miami's 'Billionaire Bunker' is a high-security island that has a 13-person police force for its 42 residents. A real-estate agent got me past the guardhouse — here's what the exclusive community looks like It’s been called the “Billionaire Bunker” and one of the “wealthiest, private, most secure communities in Miami Beach and the world.”

Read more: I got a tour of the only home for sale on Miami’s ‘Billionaire Bunker,’ a private island that hedge-fund billionaires and celebs call home. Here’s a look inside the $24 million mansion.

“Indian Creek is an exclusive 300-acre island located on the beautiful waters of Biscayne Bay and recognized asone of the wealthiest, private, most secure communities in Miami Beach, and the world,” Michael Light, founder of Miami Luxury Homes and senior director of luxury sales at Douglas Elliman, wrote on his website. “The high level of privacy and security is the highest priority to the residents of Indian Creek and maintained by having its own private police force, as well as its own 24/7 armed marine patrol monitoring the waters surrounding the island.”

I got a tour of the island fromNelson Gonzalez, a luxury realtor and the senior vice president of EWM Realty International.

Here’s what it’s like on the exclusive, high-security island.

Indian Creek is a village of just 42 people on a tiny private island in Miami’s Biscayne Bay. 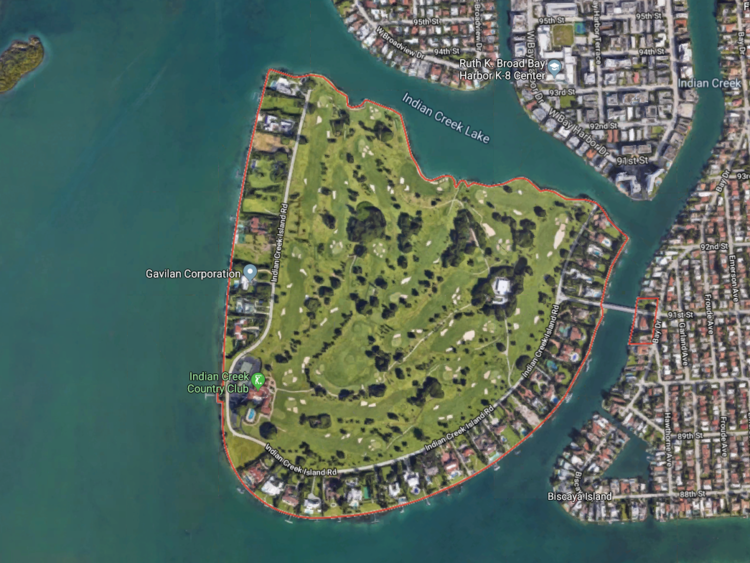 The village’s 34 homes are built around the perimeter of the island, giving them all waterfront views. The center is occupied by an 18-hole golf course and a country club.

I arrived to the island in an Uber. We were stopped at the guardhouse before even getting onto the island. 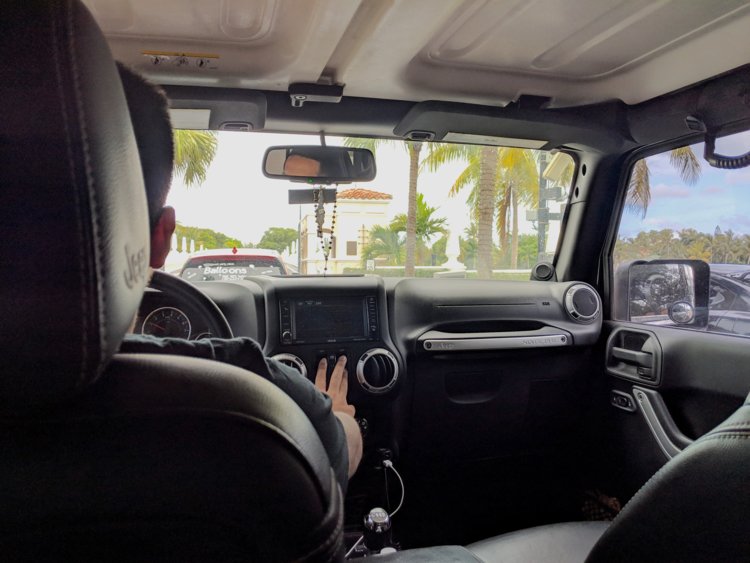 Fortunately, my name was on a list of expected guests, so I didn’t have a problem getting in.

The Indian Creek Village Police monitors the only entrance to the island. 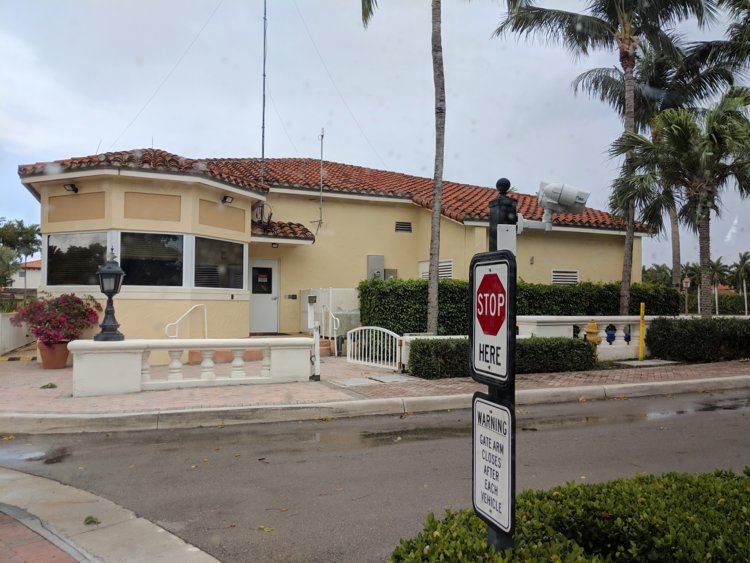 The village of 34 residents is protected by a private, 13-man police force, according to my tour guide, Nelson Gonzalez, a luxury realtor and the senior vice president of EWM Realty International.

The force even patrols the perimeter of the island from the water.

Indian Creek Village is only accessible by car via a single bridge that spans the waterway from Surfside. 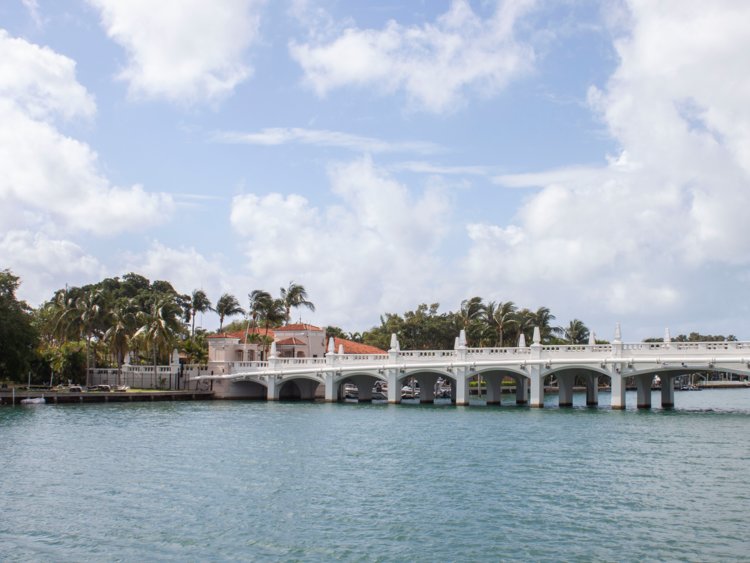 We drove across the bridge and I was dropped off in the driveway of one of the island’s opulent mansions, which I was planning to tour.

Homes in Indian Creek are rarely up for sale. Right now, there’s only one house on the market: an eight-bedroom, Mediterranean-style mansion for $24 million. 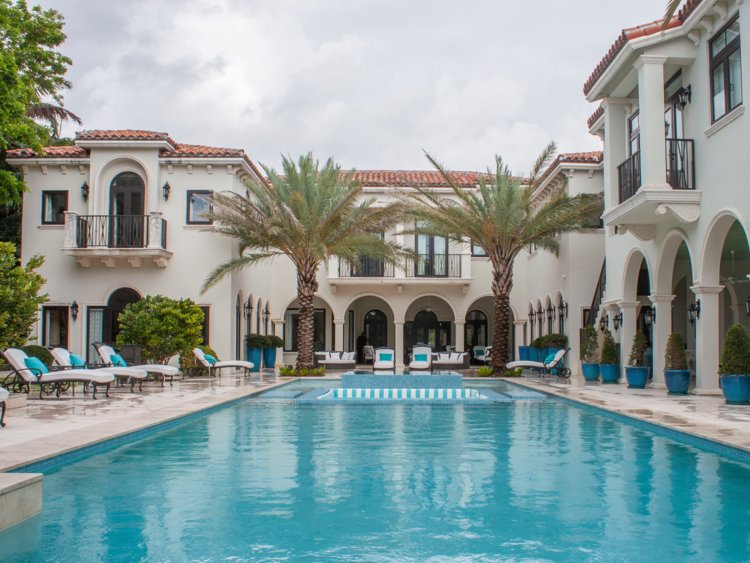 I was able to take a tour and photograph the home because it’s for sale, but I wasn’t allowed to take photos of any other houses on the island.

Read more: I got a tour of the only home for sale on Miami’s ‘Billionaire Bunker,’ a private island that hedge-fund billionaires and celebs call home. Here’s a look inside the $24 million mansion.

Although the $24 million home is the only one on the market, houses in the village have been known to sell without being officially listed.

In February 2019, an Indian Creek estate that wasn’t officially on the market sold for $50 million, breaking the record for the most expensive single-family home ever sold in the Miami area. 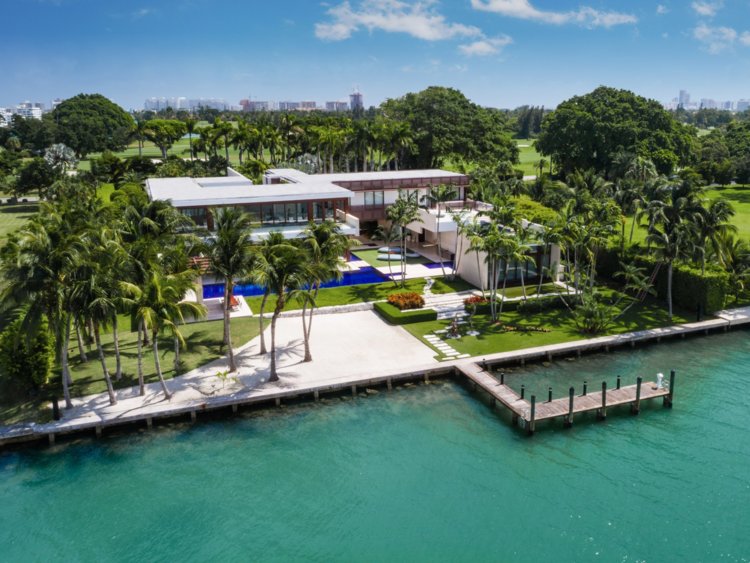 And it was the second time the home broke that record, after selling for $47 million back in 2012, as Business Insider’s Lina Batarags previously reported.

A pristine 18-hole golf course spans the center of the island. 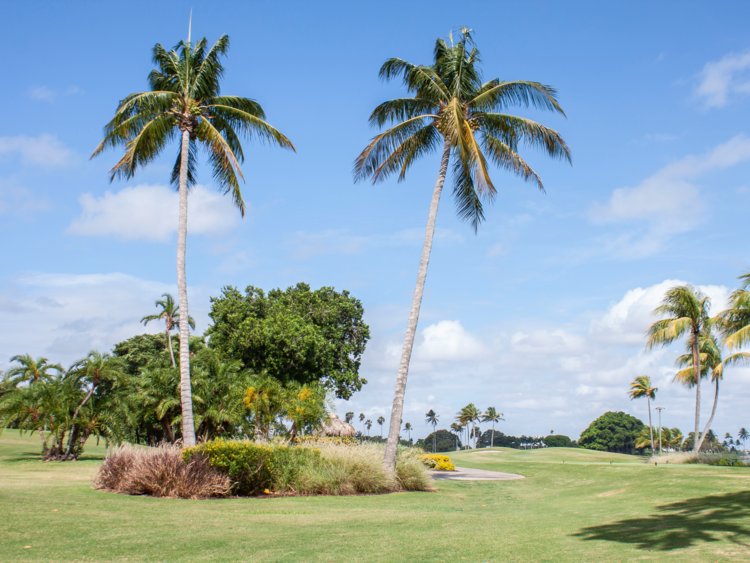 The Indian Creek Golf Course is one of the prime golf courses in Florida, according to Top 100 Golf Courses.

“This is not one of the most accessible venues for the visiting golfer, so you’ll need to befriend a member to tee it up on the classical William S. Flynn-designed course here at Indian Creek, which dates back to the 1930s,” the website reads.

I wasn’t allowed to get out of the car and walk around the island, so I took photos through the windows. 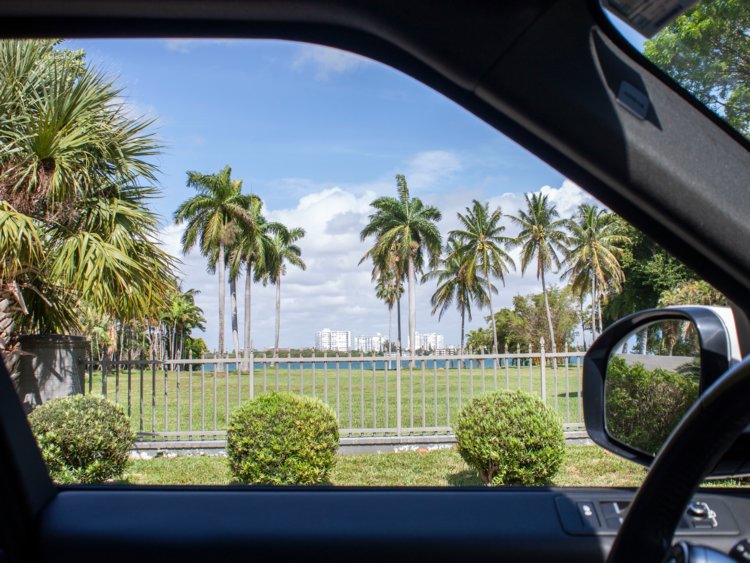 Gonzalez told me the island is high-security and the residents are very concerned with privacy. I spotted one of the private police cars patrolling the island about two minutes into my tour.

The island has just one street: Indian Creek Island Road, bordered by lavish homes on one side and the perfectly manicured golf course on the other. 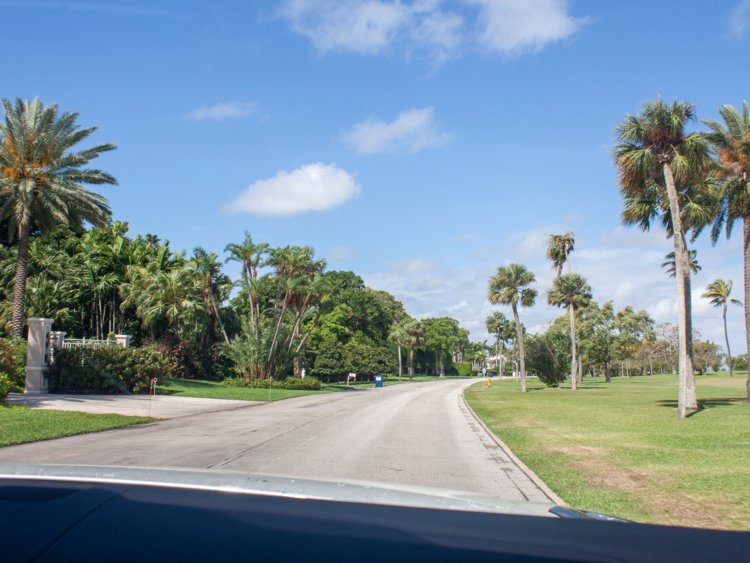 Most of the village’s homes sit behind gates, partially shrouded from view by palm trees and other lush foliage. 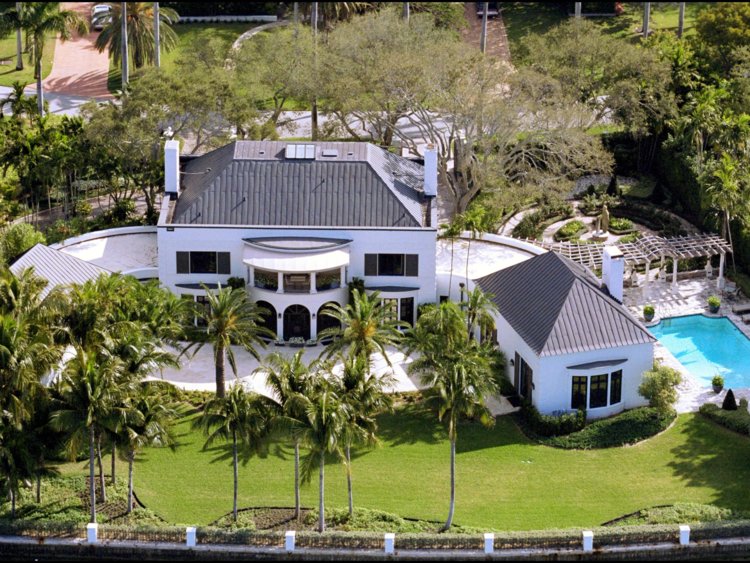 Supermodel Adriana Lima, former Sears CEO Eddie Lampert, and car dealership tycoon Norman Braman are just a few of the wealthy individuals who have owned homes on the island.

One of the island’s most famous residents is Spanish singer Julio Iglesias, who owns several properties on the island, Gonzalez told me. 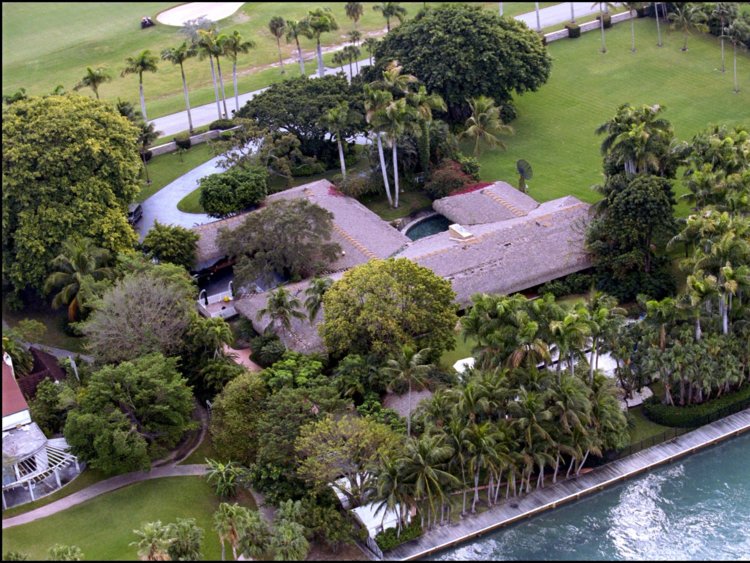 In 2017, the singer wasasking $150 million for four contiguous vacant lots he owns on the island. Together, the properties would offer 800 feet of water frontage.

Puerto Rican singer and actor Ricky Martin has also lived on the island at one point, but it’s unclear whether he still does. 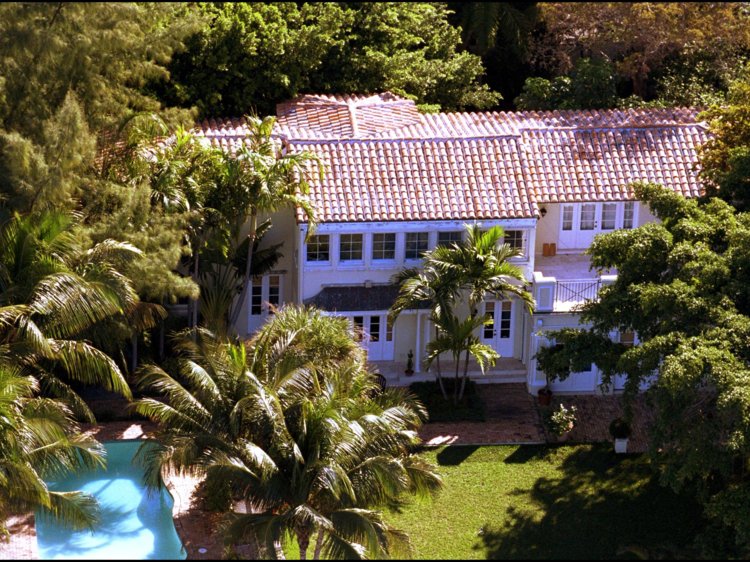 His home is ” quite small compared to the houses of the area,” according to Getty. 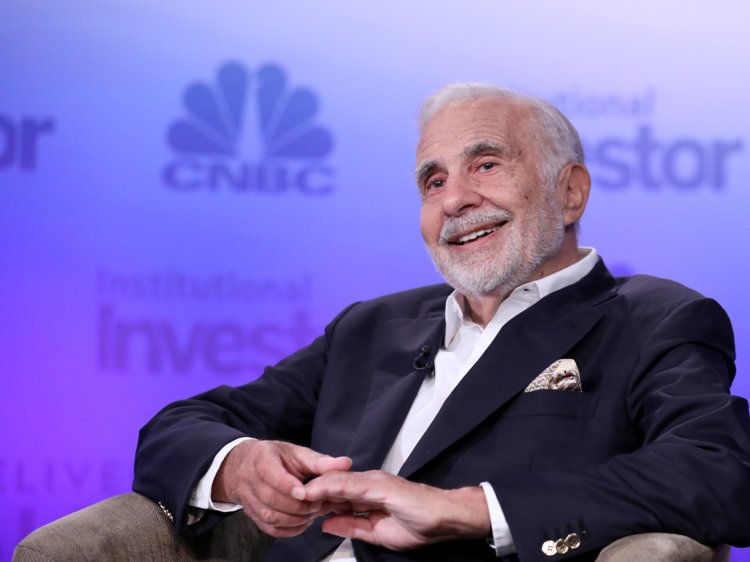 Yet another notable resident of Indian Creek is Don Shula, the legendary former head coach of the Miami Dolphins. 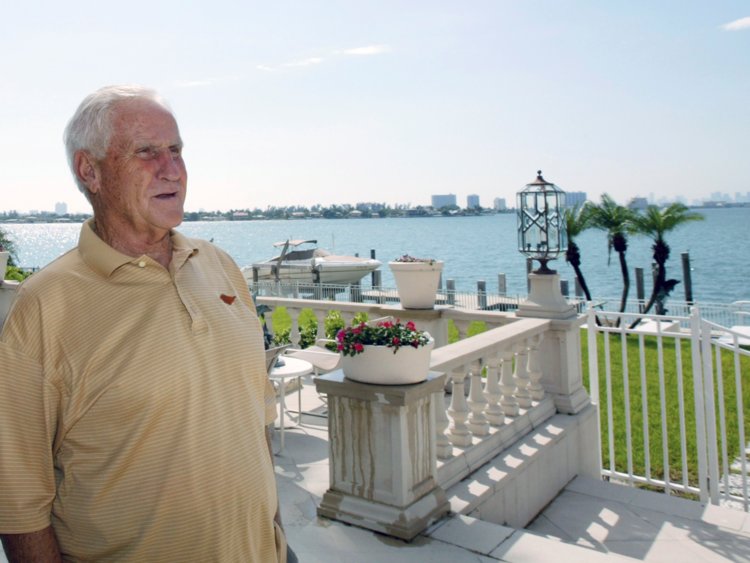 Shula and his wife have reportedlylived in a sprawling white house on the island for more than 20 years. 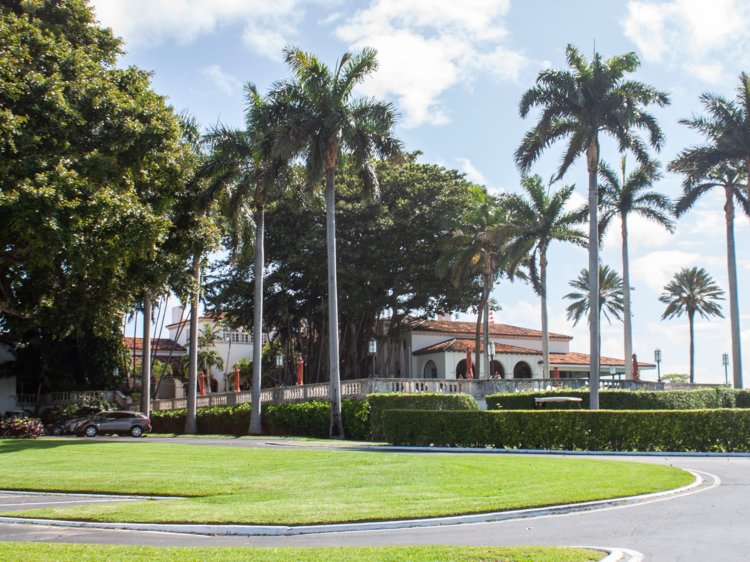 The club house’s facilities includea swimming pool, fitness center, massage and steam room, locker rooms, bridge room, and a marina. It was built in 1929 by architect Maurice Fatio, who designed many of the most famous estates in Palm Beach.

Next to the club house is a massive Banyan tree. 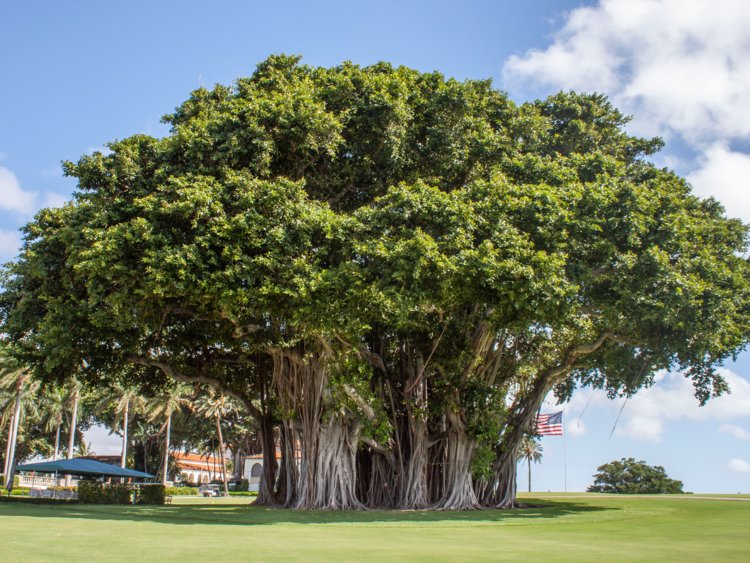 Florida is one of theonly places in North America where Banyan trees can be found, but the tree is actually native to tropical Asia.

After my tour, I was driven back out of Indian Creek Village. 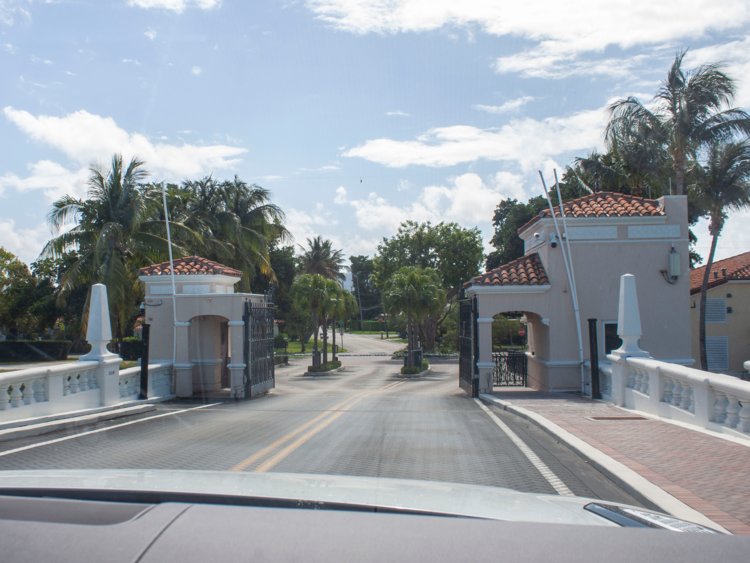 While I’d expected a degree of security on the private island, I didn’t expect it to be quite at that level, from the 13-person private police force to being screened at the guarded gatehouse and not being able to set foot outside the car or take photos of the homes.

The island is really small: The driving tour took at most 20 minutes, and that was moving slowly with frequent stops.

The most telling detail of my short time on the island is that I don’t remember seeing a single civilian on the streets or in the yards — but I saw at least two members of the police force. So, while the level of security is definitely, and understandably, a draw to wealthy residents, I found it to be a bit of a deserted island.

SEE ALSO:I got a tour of the only home for sale on Miami's 'Billionaire Bunker,' a private island that hedge-fund billionaires and celebs call home. Here's a look inside the $24 million mansion.

DON'T MISS:The world's millionaires are more mobile than ever. Here are the top 12 countries they're moving to