Since the federal Coalition came to power in 2013 on a promise to cut Labor’s debt, one of its main targets has been foreign aid. For its first seven years, the Coalition slashed foreign aid in every budget, with the total falling from about $5.5 billion a year to about $4 billion. After inflation, the fall in the value of aid has been much greater. 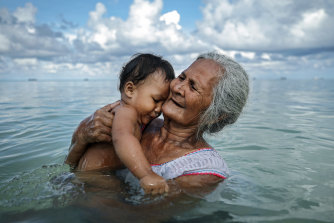 Suega Apelu bathes a child in a lagoon in Tuvalu, one of the Pacific Island nations given aid by Australia.Credit:Getty Images

Yet, according to the Development Policy Centre at the Australian National University, the Morrison government has quietly shifted policy. This year it will increase foreign development aid by 9 per cent to $4.4 billion.

The increase is welcome but it is only a start. Australia has a moral obligation to do more during the pandemic. There is also a compelling case on national security grounds that boosting foreign aid in our region will help to counter China’s growing influence.

The Coalition justified its previous cuts by arguing that our foreign aid was too generous, given Australia’s huge debt. It also said our aid was poorly targeted and ineffective. Cynics will argue the biggest reason governments cut foreign aid is that it is an easy target – the people most impacted do not vote in Australia.

It is unclear if the government’s position on foreign aid has changed in principle. Usually the government boasts about new spending programs, but the aid increase was not highlighted in the federal budget. A Department of Foreign Affairs and Trade spokesman told The Age the boost was only a “temporary and targeted” measure. Yet if the government wants to make a serious difference, it will have to spend a lot more over a longer period.

Prime Minister Scott Morrison has made the Pacific islands, which he has described as Australia’s “family”, one of his priorities in foreign affairs but there is more to do. While effective quarantine has kept COVID-19 out of the island states, the collapse of international tourism and remittances from overseas workers has devastated their economies.

The International Monetary Fund estimates the region’s economies have contracted 8 per cent on average and recovery will be very slow.

Australia has made a good start with a $300 million COVID-response package and an offer to share vaccines, but a recent Lowy Institute report argued the government needs to provide at least $2 billion more over the next few years. Many Pacific countries are mired in debt, often because they accepted loans from China to finance infrastructure projects. Lowy says Australia should help them by extending emergency loans such as the $1.5 billion recently advanced to Indonesia and $150 million to Papua New Guinea.

In previous years, the Coalition has been able to find the cash for the Pacific by slashing spending in the rest of the world, including Asia. But that strategy is now exhausted and Australia will have to boost the overall budget.

Canberra has justified its cuts, even in close Asian neighbours, with the argument that certain countries are no longer poor. But China’s influence is growing in many of our neighbours and the pandemic has caused tens of thousands of deaths, shaken their political systems and thrown millions of people back into poverty. Australia has just announced an additional $360 million for south-east Asian countries but it should do more.

The Coalition’s past wariness about foreign aid had its merits. It was right to insist that developing countries play a bigger role in solving their own problems and that aid was not wasted or stolen. But the COVID-19 pandemic is a massive shock and Australia has a special and urgent responsibility to help our neighbours, especially in south-east Asia, get back on their feet.

The Age’s editor, Gay Alcorn, writes an exclusive newsletter for subscribers on the week’s most important stories and issues. Sign up here to receive it every Friday.