My ideal birthday present is 24 hours away from my family 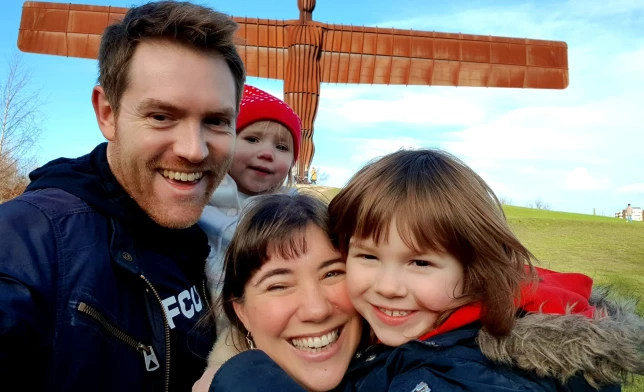 My birthday isn’t for another six months but I am already excited.

It’s not a milestone, nor am I having a big party. In fact, far from it.

I am being gifted 24 hours to myself. A whole day of just me, my book and lots of cake.

It may sound mundane to a lot of you, maybe even boring to some. But to me, a mum of two, it’s the most perfect present I can think of.

After years of giving my time – and myself – over to my children, I’m taking a day back. And I’m already on countdown.

It was actually my husband Tom’s idea. He had been talking to a colleague at work, a new mum who returned from maternity leave a few months ago, and who’d recently taken a day off to celebrate her birthday.

‘Her husband paid for her to have a night in a hotel – on her own,’ he explained. ‘It sounded amazing. I’m going to do the same for you!’

You cannot imagine my delight at his words. Not just because it sounds like the best 24 hours ever but because his generous offer shows that Tom gets it.

He understands how hard it is to be a working mum, how overwhelming it can be to juggle two children, along with the tight deadlines and urgent interviews that come with my job as a journalist.

And of course, that’s alongside trying to keep my house respectable, valiant attempts to stop our washing basket from overflowing, catch up with friends and maintain some kind of relationship with him.

He gets that, amongst all of the madness of family life, there is precious little, if any, time for myself – and just how devastating that has been for me.

It’s become a massive cliché to say that women lose themselves when they become a mum, often an expression that is jeered at, or joked off, these days. But these things only become a cliché because they’re true.

And believe me, the vast majority of parents will agree it’s no laughing matter.

I’ve always been extremely social, working in bustling offices and heading out straight after to meet friends for drinks, dinners or dancing, depending on our mood.

But, back before I had children, I used to balance this out by making sure I made time for myself. During a busy week, I’d ensure at least one night was free to put on a face mask or maybe do my nails, stick on a film of my choosing or head to bed early with my book.

Or I’d spend a quiet Saturday mooching around the shops before treating myself to lunch in a café and picking up something nice for tea.

One of my favourite days ever was when I visited a friend who was working in the US. Because of her shifts, I ended up having a day on my own in New York and I absolutely revelled in it. Clutching my travel guide, I wandered down Fifth Avenue, stopped by the Public Library and visited as many quirky second-hand book shops as I could.

The luxury and freedom of being able to do exactly what I wanted without compromise was absolutely exhilarating. Of course, I didn’t realise that you don’t know what you’ve got till it’s gone. That was definitely the case here.

Because as soon as I had children, for the first time in my life, I was with someone – admittedly, a rather small someone – constantly. And I never realised just how suffocating that could be.

Now, I wanted to be a mum and both of my children, Theo and Immy were planned – I knew exactly what I was getting myself in for and I couldn’t love my children more. I adore being with them. They’re full of fun and are actually hysterical. They’re brilliant.

But the culture shock of having literally no moments to myself has been overwhelming. Even when they started nursery, there was no let up as I was straight back to work.

Now that they’re five and three, I do have the occasional night out with friends and Tom and I have had a few date nights. But quality time on my own, to do my own thing? Apart from the weekly 45-minute gym session, there’s none of it.

And that’s what is so hard about being a mum. You start to forget what you enjoy and how good doing those things makes you feel. You stop being Sarah and you just become Mammy.

Because now, rather than spending my weekends exploring new towns or writing for pleasure, instead, we go to the soft play or the swimming pool. Not true swimming of course, just splashing around in the baby pool.

And while I love seeing the delight on Theo and Immy’s faces as they wave frantically at us from the ball pit or pour buckets of water over Tom simultaneously, there’s no question it’s for them.

It’s all for them. The cinema trips to see Clifford The Big Red Dog, the walks to the park where we’ll spend 45 minutes on the swings, the movie nights where we watch Frozen for the gazillionth time, the baking sessions where half the cake mixture ends up on the floor, the jigsaw puzzles I’m not allowed to help with but I can’t leave their sides… All of it.

And Tom couldn’t have picked a greater moment to offer me this magnificent gift. Because before now, I wouldn’t have accepted it. I would have felt too guilty, or that I was missing out. I wanted to be Mammy, rather than Sarah.

Now, however, I’m ready – just for a day – to take some time for myself.
I am going to write, relax, read, visit restaurants, and go swimming. I’m going to do exactly, uncompromisingly, what I want. I am going to be Sarah.