Natasha Kaplinsky felt 'barren as a woman' after multiple miscarriages

The broadcaster, 49, of Sussex, struggled to conceive due to an undisclosed medical condition in the years after marrying husband Justin Bower in 2005 and said the experience made her feel like she had ‘let her husband down’.

Speaking on This Morning today, Natasha told of the private heartache she felt before falling pregnant with son Arlo, who was born in 2008, and daughter Angelica, born two years later.

The newsreader explained what made it especially difficult was the feeling she was robbing Justin of the joy of fatherhood. 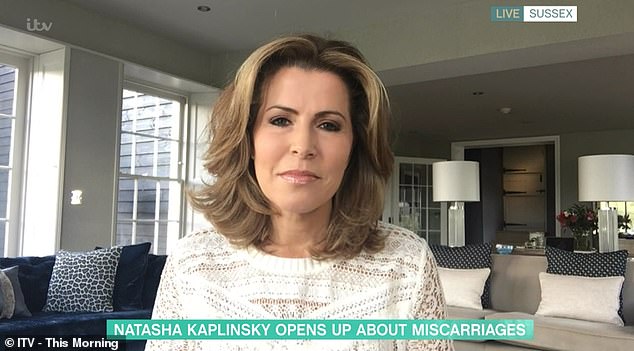 Appearing on This Morning today, the presenter, 48, told of the ‘heartbreak’ she felt while struggling to get pregnant multiple times 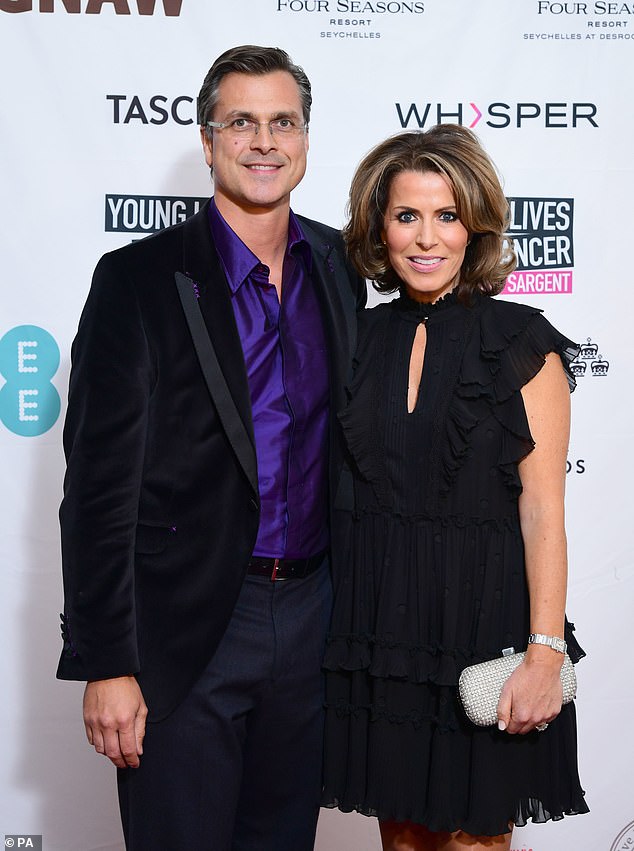 Natasha Kaplinsky revealed she felt ‘barren as a woman’ and like she had ‘let her husband down’ after suffering multiple miscarriages. Pictured, Natasha and husband Justin Bower in 2019

‘I felt I could manage my own disappointment,’ she said, ‘But I desperately wanted to make Justin a father and I just felt barren as a woman.

‘Anyone [who has suffered miscarriages] will know that feeling of letting your partner down, for me it was that heartbreak. I was going to take away that joy for Justin and that made it extra hard.’

Natasha shares her story in Channel 5 documentary Miscarriage: Our Story, which airs tomorrow night. The mother-of-two explained she had ‘promised herself’ to speak about her struggles to conceive if she was ever able to have a child naturally.

‘It took a decade to talk about it,’ she said, ‘I promised myself at the time when I was miscarrying and was so desperate to be a mother, that if I ever was successful to be a natural mother, I would use this to help others.

‘Our son has just turned 12 and now I’ve decided to talk about it.’

Natasha has not named the medical condition that led to her miscarriages, or revealed how many babies she lost. 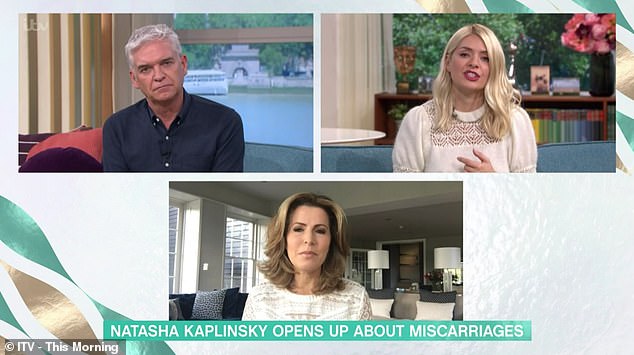 Natasha recalled being told her first pregnancy was not viable, and insisted to hosts Holly Willoughby and Philip Schofield that more needs to be done to break the ‘taboo’ surrounding miscarriages

She first discovered she was pregnant in 2006, a year after her wedding to Justin, but was told at the 12-week scan that the pregnancy wasn’t viable.

‘It’s so important we speak about it,’ Natasha said. ‘It’s such a taboo subject. I remember the sonography session and the sonographer said “Would you like a moment to yourself?” and that’s how I was told the pregnancy was not viable.

‘It is such a taboo subject and people don’t talk about it, I, of course, spoke to my family and Justin.’

She explained that while ‘thousands of women’ experience multiple miscarriages, women suffering can often feel ‘lonely’ while going through them. 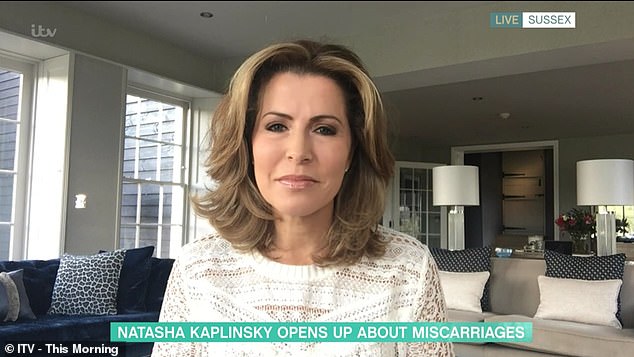 ‘I think it’s an experience, sadly, that many more women then we know the experience’, said Natasha, ‘And of course I was devastated and trying to hold down a job.

‘But there are many thousands of women who go through multiple miscarriages, I’m not unique in that but when you are in that experience you feel terribly lonely.

She hopes to offer ‘comfort’ to other women who have suffered ‘repeated grief’ after multiple miscarriages.

‘It is such a lonely time’, she said, ‘It does feel like you are the only person who will never be successful when you go through multiple miscarriages.

‘The point of the film is to offer some comfort to women and men who are suffering that repeated grief.’