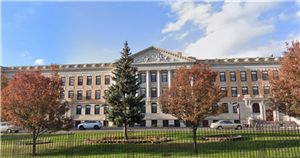 A high school teacher in New Jersey was suspended after going on a profane tirade and calling George Floyd a “criminal” in a virtual class, school officials said.

A discussion about climate change on Zoom last week turned into an airing of grievances by Howard Zlotkin, a teacher at William L. Dickinson High School in Jersey City. A video obtained by WNBC shows Zlotkin, who is White, saying people are “whining and crying about Black Lives Matter.” He also used expletives to talk about the Floyd case.

“He got arrested and he got killed because he wouldn’t comply and the bottom line is we make him a f—–g hero,” Zlotkin said in the recording. Floyd died while in custody of former Minneapolis police officer Derek Chauvin, who was recently convicted in his murder.

At one point, Zlotkin tells his students, “If you think I’m privileged then f— you, because my daughter thinks I’m privileged and I don’t speak to her.”

Timmia Williams, one of the students that was present in the class, told WNBC that Zlotkin appeared to target his ire at Black students, and he called on four girls who are Black to write an essay. Her mother, Margie Nieves, said her teen daughter cried about the incident.

“She was crying. She came to me, tells me, ‘Mom why is it there’s a problem with my skin?'” she told the news station.

Mussab Ali, the Jersey City Board of Education president, wrote on his Facebook page that Zlotkin was suspended amid an ongoing investigation.

“The comments made by this individual are not representative of our district or our city,” Ali said. “In June of last year, our Board of Education passed a resolution declaring racism as a public health crisis in light of the horrific murder of George Floyd.”

Zlotkin is also an adjunct professor at Hudson County Community College, not far from the high school. In a statement obtained by CBS News, the school said it suspended Zlotkin with pay, pending an investigation, after becoming aware of his “offensive and derogatory language while teaching a Dickinson High School Zoom.”

CBS News reached out to Zlotkin over Facebook, but he didn’t not immediately respond.