Production on Season 5 of the hit Fox reality series is set to begin Thursday, with new episodes scheduled to premiere in March.

Like almost every other reality series, “The Masked Singer” has been impacted by the ongoing coronavirus pandemic. But very few of them have seen that impact change the very face of the show.

And yet, when Season 5 of the hit show kicks off in March, it will have to do so without its host, Nick Cannon, according to Variety. After Cannon unexpectedly tested positive for the COVID-19 virus, the network reached out to find a replacement, rather than delay production. 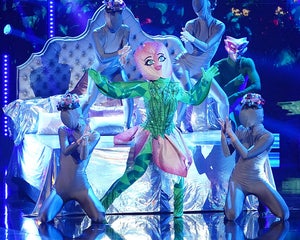 So while Cannon is reportedly in quarantine and resting — it is not stated whether he is symptomatic — Niecy Nash is stepping in to steer the top-rated competition.

While most quarantines are a minimum of two weeks, it’s not at all clear how that might look on the screen. Usually filmed in complete secrecy, it’s never been revealed how many episodes are filmed per week.

Based on the wardrobes of panelists Robin Thicke, Jenny McCarthy, Ken Jeong and Nicole Scherzinger — who are all four returning — it looks as if entire rounds of the competition might be filmed on the same day.

At the same time, it’s possible the cast is just asked to wear the same outfit for an entire round for the sake of continuity, and to allow producers and editors some flexibility in how they put their episodes together.

Nash is no stranger to Fox’s zany reality competition, either, having previously appeared as a guest panelist. She also dropped by the network’s Jeong-hosted “I Can See Your Voice” a couple of times, making her a friend to the network’s strangest programming.

While Variety reports that Fox expects Cannon to return at some point later in the season, there is obviously no way they could guarantee if and when that might be at this time.

With the show following strict safety protocols, he’d have to test negative at the very least before being allowed on and there’s no way to predict the soonest that might happen. At least they know the series will be in very good and very funny hands.

“The Masked Singer” is scheduled to return to Fox next month after the currently-airing inaugural season of “The Masked Dancer” — hosted by Craig Robinson — wraps in a couple of weeks.