Nigella reveals where she bought cookware for Cook, Eat, Repeat

How YOU can replicate Nigella’s kitchen: Chef reveals where to get cookware that has fans of Cook, Eat, Repeat ‘obsessed’ – including a leopard-print knife, glass pan and copper spoons

Nigella Lawson has been sharing where she bought items currently being lusted after by home cooks after they watched the first episode of her new BBC series Cook, Eat, Repeat.

The television chef, 60, has been inundated with questions about the cookware that she was seen using to make dishes including banana skin curry and fish finger bhorta during Monday night’s show.

Lawson, who has 2.6million followers on Twitter, offered up details of where fans smitten with the items she used – including a glass pasta pan, leopard-print knife and copper measuring spoons – could snap up versions for themselves. 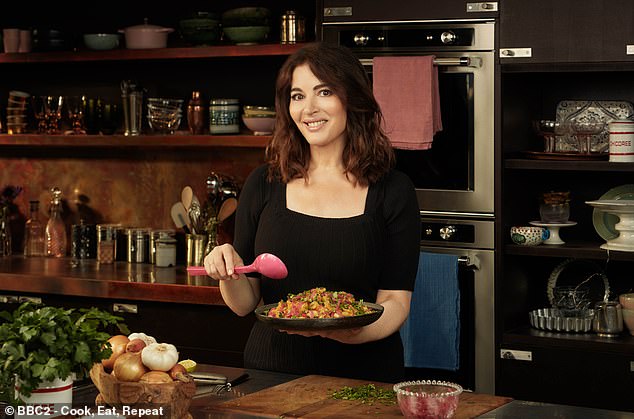 The television cook, 60, returned to screens with new show Cook, Eat, Repeat on Monday, and fans have been asking Nigella on social media to share details of the stylish kitchenware used on the show, which she duly has done… 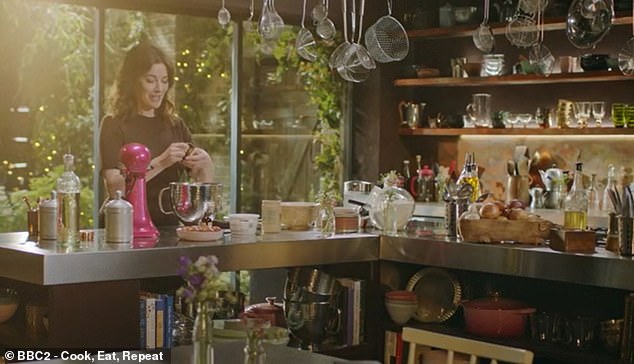 Kitchen dreams: It’s unclear whether the set used to create the Cook, Eat, Repeat recipes is Nigella’s real kitchen…but that didn’t stop fans obsessing over the kitchenware that appeared in it 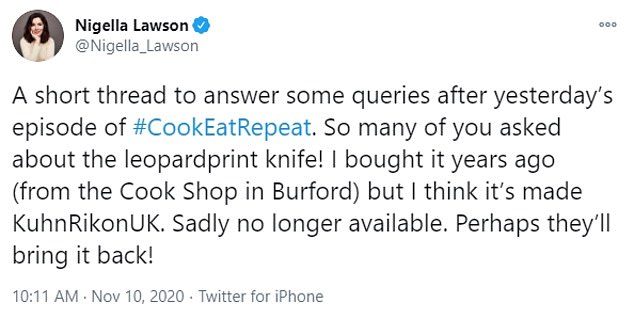 She told her followers: ‘A short thread to answer some queries after yesterday’s episode of #CookEatRepeat.

‘So many of you asked about the leopardprint knife! I bought it years ago (from the Cook Shop in Burford) but I think it’s made KuhnRikonUK. Sadly no longer available. Perhaps they’ll bring it back!’

Here’s FEMAIL’s low-down on some of the kitchenware featured on the programme, and where you can buy it:

The small, colourful fruit knife, which was used to chop up red chillies on the show, has been seen in the star’s previous programmes and has always attracted attention. However, as Nigella divulged on Twitter, the line has now been discontinued by German kitchenware brand Kuhn Rikon.

She told fans she’d picked up the knife in a branch of Cook in Burford in the Cotswolds, and hoped the manufacturer would consider bringing it back. The brand still produces other patterned fruit knives – including one with an avocado print on it – for £24.95, kuhnrikon.co.uk 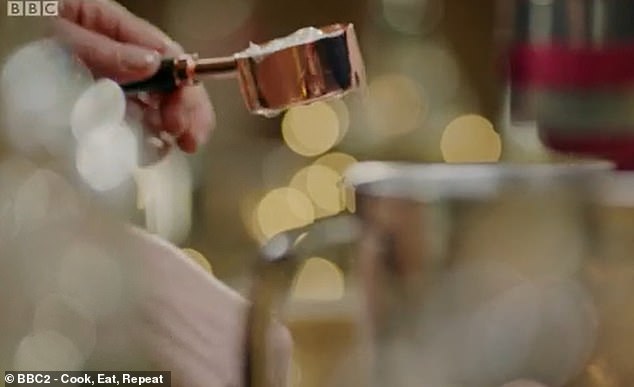 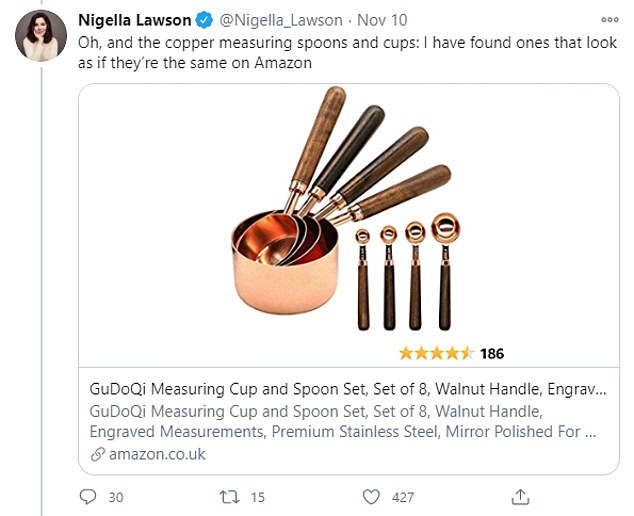 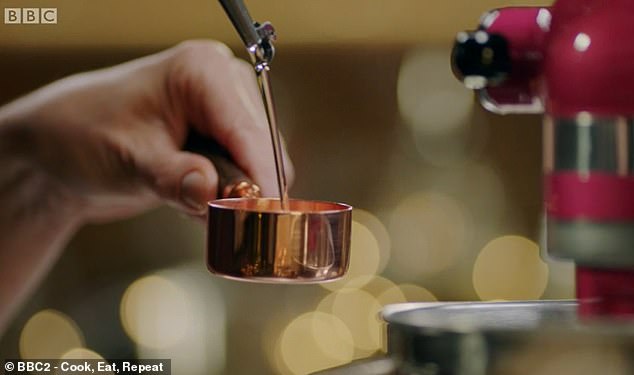 The hard-working TV chef even went to the trouble of trying to find similar items to the ones used on the show, offering up an Amazon link to a set of chic copper measuring spoons and cups by GuDoQi, retailing at between £15 to £25, 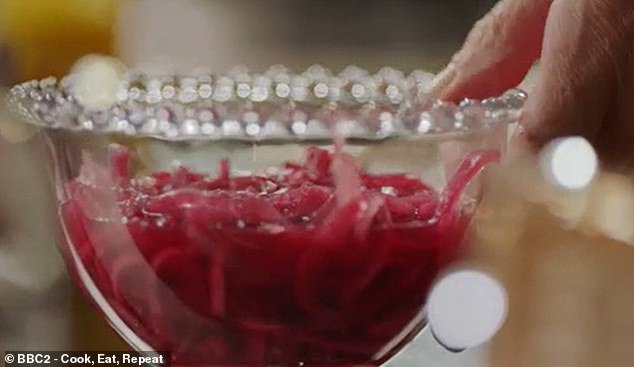 Beaded glass dessert bowls were seen several times during the show, retailing at £26 for six 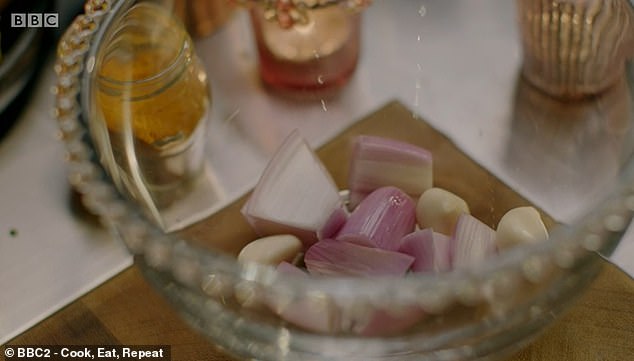 Used to house chopped red onion and garlic, the dishes are made by West Yorkshire brand Dibor

Pretty Bella Perle dessert bowls, which retail at £26 for a set of six, were a frequent sight during the show, with a bigger version, a £16 salad bowl, also used for mixing by the TV chef.

Nigella told followers that the glass bowls with beaded glass rims were made by West Yorkshire cookware brand Dibor, dibor.co.uk 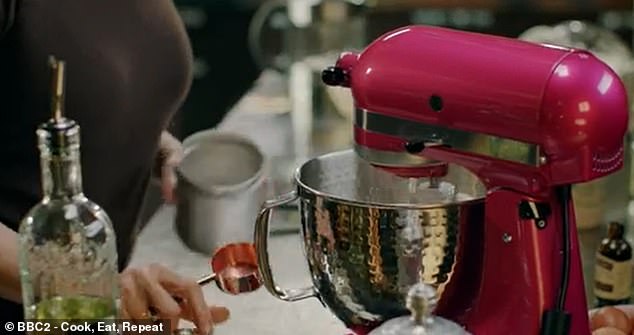 Nigella’s appreciation of KitchenAid mixer’s continues, with a cerise coloured one taking centre stage this year. The mixer usually costs £499 and comes in an array of colours but with its distinctive hammered steel bowl, this pink one could be a one-off for the show

Where there’s a Nigella show, there’s always a KitchenAid mixer it seems.

Last year, the star plumped for a trendy copper version of the high-end mixer, which retails at around £499.

However, viewers tuning into Cook, Eat, Repeat saw the TV cook working with a cerise pink version, one that doesn’t seem readily available from UK stockists of the brand, suggesting it may be a one-off for the show, kitchenaid.co.uk. 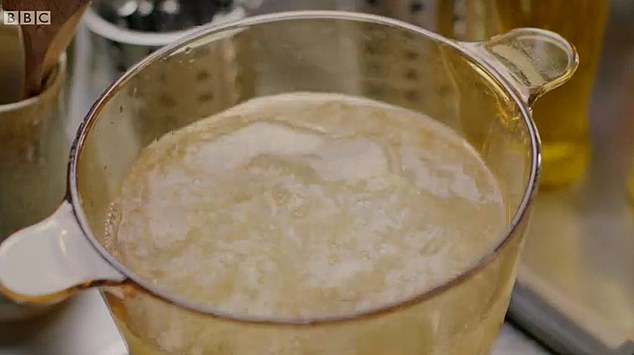 Although Nigella didn’t share where she got the pasta pan used to cook up papperdalle during the show, similar ones retail at £66.99 from worldkitchen.co.uk 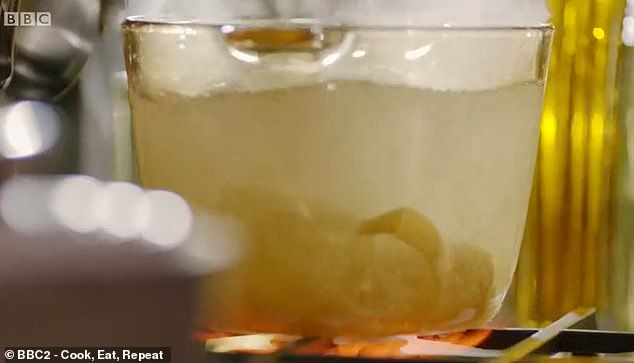 While the chef didn’t respond to requests for where she got the glass pasta pan used to cook up her papperdelle for the wide noodles with lamb shank in aromatic broth recipe, fans began coming up with their own ideas on where to bag the transparent pot. A similar 3.5 litre cookpot costs £66.99 from worldkitchen.co.uk

The iconic lidded Le Creuset casserole pot, which retails from £99 for the smallest size, was used to cook up Nigella’s lamb shank dish

A staple for serious home cooks, the Le Creuset casserole pot, in a shade of bright orange, was used to finish off the lamb shank noodle dish. The lidded dish – in cast iron – retails from £99 for the smallest size in the range, rising to up to a whopping £290 for the biggest, which holds 6.7litres of liquid, johnlewis.co.uk.

Nigella’s latest television cookery show for BBC2 focused on resourcefulness, with the domestic goddess using leftovers to create some of the dishes.

Even Nigella herself, who recently denied she’s a domestic goddess, appeared hesistant about an Indian banana skin curry, tweeting after the show aired at 8pm: ‘I hope I didn’t traumatise you too much with the banana skins (I promise you the curry is divine).’

During the show, wide-eyed viewers watched Nigella boil, chop and shred the peel, comparing the skins in the finished dish to ‘like eating Klingons’, a reference to the famous Star Trek characters.

Encouraging home chefs to be more inventive with leftovers, she created a chocolate tahini pudding with the flesh of overripened bananas…before saving the skins from the food recycling bin and pressing on with the unusual recipe.

After boiling them in a pan of water, Nigella said the softened skin of the bananas would add ‘texture’ to a curry and were similar to the skins of aubergines when softened.

However, not many were convinced they’d reach for the fruit bowl when next making their next spicy lockdown dish.