Treasurer Josh Frydenberg said the federal government did not include a clawback provision in its $70 billion JobKeeper program because asking businesses to prove loss of turnover would have delayed the payments.

The $70 billion support program was the single biggest government spend during the COVID-19 pandemic and, despite being supported by the federal opposition, is facing intense criticism as more companies who pocketed the subsidies report a jump in their earnings. 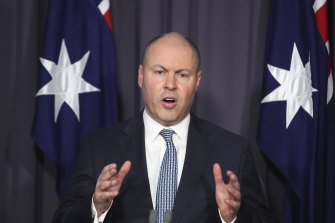 There is no legal requirement for businesses to hand back money they didn’t need which the Treasurer said was a deliberate design of the program. The program was drawn up as the pandemic swept across the world in early 2020, prompting governments to shut down their economies to try and stave off the virus.

“If they were going to pay back that money then they wouldn’t have necessarily taken it in the first place,” the Treasurer told the ABC’s 730.

“If businesses had had to show an actual turnover decline then we wouldn’t have gotten the money out the door,” he said.

He said that the “economic armageddon” the country faced in March last year, when the program was introduced, justified the design of the program.

“We were staring into the economic abyss,” he said citing Treasury predictions of unemployment reaching 15 per cent and the economy contracting by 20 per cent in the June quarter alone.

Unemployment in Australia is currently 4.6 per cent, which the Treasurer said was in part due to the success of JobKeeper.

The opposition is trying to force the government to expose the companies that received the subsidies but did not need them and did not repay the funds.

Figures compiled by the Parliamentary Budget Office showed that almost $13 billion of the subsidies went to companies that did not satisfy the requirements of the program in its first three months.

Gerry Harvey is among the business figures who have been pressured into handing back huge sums of subsidies.

Harvey Norman will return $6 million it pocketed in support claims despite the company reporting $1.1 billion in pre-tax earnings and a 79 per cent jump in profit.