Prime Minister Scott Morrison’s chief of staff has ruled there isn’t strong evidence that media advisers gave negative briefings against the partner of former Liberal staffer Brittany Higgins after she made public allegations she had been raped.

Ms Higgins went public in February with allegations she was raped by a colleague in a ministerial office in Parliament House in March 2019. Along with a series of other reviews, Mr Morrison ordered an internal investigation into claims that his staff had backgrounded against Ms Higgins’ partner David Sharaz.

“My chief of staff found in the negative,” Mr Morrison said on Tuesday as he tabled the report from his chief of staff John Kunkel. But Labor said the careful wording in Dr Kunkel’s report blamed everyone but the Prime Minister’s staff while acknowledging there was some degree of background information discussed. 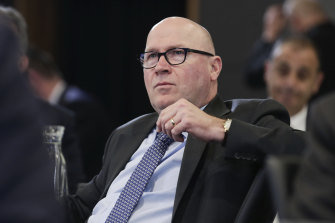 The Prime Minister’s chief of staff, John Kunkel, has investigated whether journalists were given negative information about Brittany Higgins’ partner.Credit:Alex Ellinghausen

Ms Higgins wrote to Dr Kunkel in March after hearing from journalists that “backgrounding was happening against my partner” by the Prime Minister’s media team in the days after she aired her allegations.

Dr Kunkel spoke with Ms Higgins, three journalists from the press gallery, and all senior members of the Prime Minister’s media team, his report to Mr Morrison tabled in Parliament on Tuesday says.

None of the journalists “recounted, or was in position to substantiate, first-hand experience of such activity”. The report said they characterised what had happened as “a passing conversation” or “corridor chat” between reporters.

Other journalists named in Ms Higgins’ letter declined to take part in the investigation. The journalism code of ethics says reporters should respect the confidences of sources in all circumstances.

The Prime Minister’s staff rejected the allegations they had sought to undermine the reputation of Mr Sharaz, Dr Kunkel’s report says.

In his findings, he notes there were extensive conversations in February about Ms Higgins’ allegations of sexual assault, what the Prime Minister’s office might have known and her personal circumstances, and that “members of the PMO media team participated … in the ordinary course of their interactions with the press gallery”.

But he said based on the first-hand evidence he did not find the negative briefing had happened.

“In the context of my inquiry, such a finding would be based upon hearsay (in some instances, second- or third-hand),” he wrote.

“My conclusion, based upon the evidence presented to me, should in no way be taken as a reflection upon the honesty or sincerity of Ms Higgins.”

Senior Labor senators Katy Gallagher and Penny Wong expressed at length their incredulity over the report and its findings, saying during a Senate estimates hearing it repeated the smears against Ms Higgins’ partner and sought to blame journalists.

“The backgrounding did happen, we know it happened – corridor conversations were had but supposedly it was the journalists asking the PMO questions,” Senator Gallagher said.

She said Ms Higgins had the report sent to her after it was tabled in Parliament.