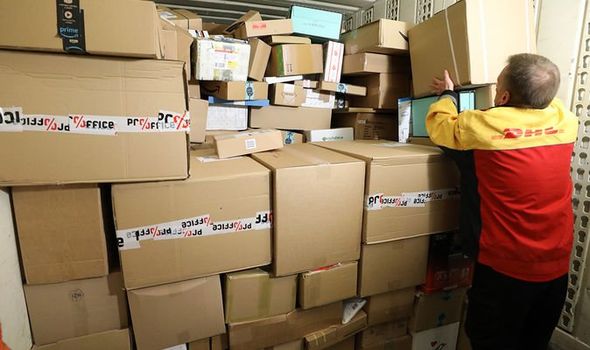 DHL and Yodel delivery drivers could be going on strike after receiving an “insulting” one percent pay rise. This could see thousands of deliveries across the UK suffering disruptions.

A recent poll showed that 98 percent of DHL delivery drivers voted for industrial action after their pay rise.

This could lead to online shopping deliveries from Argos, Asos, and others companies suffering disruptions.

However, a nationwide shortage of HGV drivers has put unions in a better position to negotiate pay conditions.

Unite regional officer Phil Silkstone said: “National HGV driver shortages are all over the news, so how DHL thought it was going to get away with an insulting offer of a one percent pay rise is beyond me.

“Our members have signalled that they are willing to take strike action and we will now be moving to opening a formal industrial action ballot.

“Unless Sainsbury’s and DHL, both of which run extremely healthy profit margins, get their acts together there will be empty shelves in Sainsbury’s stores across London and the South East of England.

“That possibility can be avoided by coming up with an offer that reflects the hard work and dedication shown by these drivers.”

GMB national officer Andy Prendergast said: “Yodel has seen fit to pick a fight with its loyal workforce in the midst of a chronic, nationwide driver shortage.

“Yodel has consistently ignored the agreements they have with their drivers. Instead of antagonising them Yodel should be moving heaven and earth to keep them on side.

“GMB has tried for many months to settle this dispute, but the Yodel top brass don’t want to listen.”

A Yodel spokesperson said: “We are disappointed by the GMB’s ballot plans having been proactive in conversations with the union for a number of weeks.

“We will continue to work with our union colleagues in good faith and are committed to further discussions to resolve any remaining matters.

A DHL Supply Chain spokesperson said: “We are disappointed that Unite is referencing the possibility of future industrial action at our Dartford depot.

“Further pay talks are scheduled, where we are confident of reaching a satisfactory outcome for both parties.”

The news comes after Greggs announced a shortage of chicken bakes and baguettes.

Other restaurants like McDonald’s, KFC, Nando’s or Costa have also been hit by shortages.

Tesco recently warned Christmas might be cancelled as the lorry driver shortage has left the stores with empty shelves.

The supply chain disruption is blamed on Brexit and the pandemic.