Pack your pyjamas, Opera Australia is hosting a sleepover

Opera fans are being encouraged to forget the black tie and ball gowns and instead pack their pyjamas when Opera Australia stages its first event on Cockatoo Island, complete with sleepover options, including tents and apartments on the island.

And boaties will even be able to watch the new production of Carmen from the deck of their vessel, with moorings also available for hire in front of a giant screen. 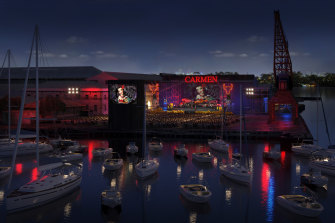 Yachties will even be able to moor up and catch the entertainment (artist’s impression).

Plans for the new event, which opens on November 25, 2022, were unveiled this week by Opera Australia artistic director Lyndon Terracini. He also confirmed, as widely expected, that 2022’s performance on Sydney Harbour would be Andrew Lloyd Webber’s Phantom of the Opera.

Terracini said the Cockatoo Island production, slated to run until December 18, would be very different from the annual Handa Opera on Sydney Harbour (HOSH).

“I think people will be really enthusiastic about seeing shows outdoors post COVID but I didn’t just want to replicate HOSH,” he said. “I wanted to do it as a more grungy kind of show. It’s not black tie this one – you can wear your jeans and T-shirt. It’s more burger and chips and a beer than champagne.”

Terracini said patrons should expect high-energy car chases and shootouts in the re-working of Bizet’s classic tale of love and jealousy.

Phantom of the Opera will open on March 25 and be directed by Helpmann Award-winning Simon Phillips, perhaps best known for the stage adaptation of Priscilla Queen of the Desert and Muriel’s Wedding the Musical.

Opera Australia’s announcement comes ahead of the release of what is expected to be a full summer and winter season for 2022 and follows a disastrous period for the company, which saw more than a thousand nights lost to the pandemic shutdown.

“It’s been horrible,” said Terracini, revealing that he had even fielded messages from staff who were talking about suicide.

“Performers get extremely involved in the music,” he said. “When the virus came back again I think a lot of people felt that they’d never perform again.” 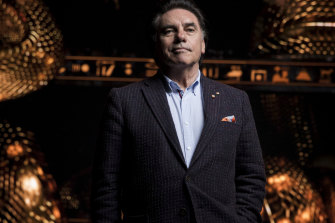 Compounding the problem for many musicians has been the inability to stay “match fit” during lockdown.

“Some of the singers live in small apartments and you can’t be singing your head off with Wagner all day, especially with the neighbours working from home, too,” said Terracini.

Opera Australia became embroiled in a very public battle with staff in 2020 when it sacked almost a third of its orchestra during the first pandemic lockdown, sparking demonstrations and widespread criticism within the arts community.

This time around, however, there have been no sackings, due in part to the injection of $46 million from the sale in March of its warehouse in inner-city Alexandria.

“We have been paying everyone and I assured everyone that we would pay them until the end of the year,” said Terracini. “That’s working out well because we will be able to start our summer season but if it went on for another six months I don’t know what we would do.

“And obviously they [the staff] think that too. They can see what’s going on and they think, ‘Well, clearly the company can’t do this forever’.”

Terracini said morale was high within the company, with all staff eager to return to the stage.