Minister for Women Marise Payne has defended tax cuts, wage subsidies and employment schemes as gender neutral amid criticism the federal budget is too focused on male-dominated industries and overlooks women.

The government has come under fire since the 2020 budget was unveiled earlier this month for not explicitly focusing on the role of women in the post-coronavirus recovery. 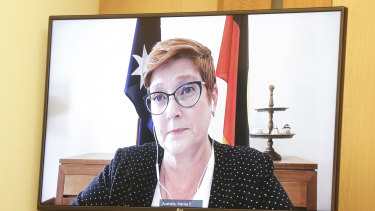 Minister for Women Marise Payne appearing via videoconference during the Senate estimates hearing on Monday.Credit:Alex Ellinghausen

Senator Payne refused to budge on whether the Morrison budget would unfairly help one gender over another when pressed during Senate estimates on Monday, instead repeatedly saying the policies introduced were not gender specific.

"In a situation where $101 billion of taxpayers' money is supporting around 3.5 million individuals in Australia as part of the JobKeeper process and 1.7 million of those recipients are women in Australia, then it is an important economic lifeline for those women," Senator Payne said.

"Self-evidently in the application of the JobSeeker payments … and the additional payments made in COVID-19, they have been equally applied to women and to men."

Senator Payne hit back at criticism from Labor senator Jenny McAllister that the $231 billion 2020 Women’s Economic Security Statement, revealed alongside the federal budget, appeared to be an "afterthought".

"The comprehensive nature … self-evidently shows you that it is so far from an afterthought that that is in fact, to those who have put a great deal of effort into its preparation … entirely unfair," Senator Payne said.

Recent Parliamentary Budget Office research found a huge increase in the number of women in their 40s, 50s and 60s relying on unemployment benefits for long periods, while economists and unions have asked for a more substantial focus on women's jobs and female-dominated industries given they were hit hard financially by the pandemic.

The government spent $2.8 billion to encourage employers to keep on apprentices and support new hires, but only 14,000 of the 180,000 apprentices supported through this scheme were women.

A recent report by the National Foundation of Australian Women found the federal budget "stimulates male-dominated jobs and industries" and provides tax cuts, which benefit higher-earning workers who are typically men.

Labor spokeswoman for women Julie Collins said the Office for Women had not been consulted on the design of the federal government's policies to respond to the pandemic.

A response to a question on notice to the Department of the Prime Minister and Cabinet by the Senate Select Committee on COVID-19 said the Office for Women provided a briefing on childcare between March and April, at the height of the pandemic, but did not give briefings on early access to superannuation, JobKeeper or JobSeeker.

"It has also emerged the Office for Women did not brief the Morrison government on budget measures including JobMaker and the latest round of tax cuts," Ms Collins said.

"Australian women are being left behind under the Morrison government and now it is clear they are being locked out of decision making," she said, adding there was no new funding for frontline service providers to help women facing domestic violence and no new measures to drive down the gender pay gap.