Photographs stolen from Head On Photo festival in Botanic Gardens Four photographs by acclaimed London-based photographer Tariq Zaidi have been ripped from a fence in an outdoor exhibition in Sydney's Royal Botanic Gardens.

Dismayed staff working for the Head On Photo Festival arrived at the vandalised exhibit about 9am on Tuesday to find no trace of three of the displayed works, while a fourth was located hanging off a nearby fence. Seven other photographs by the artist were untouched. 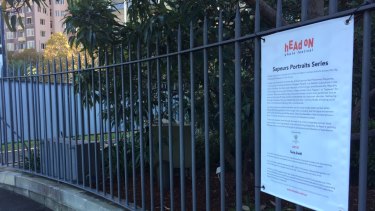 The exhibition is now missing three photographs. Credit:Head On

Festival founder Moshe Rosenzveig said it is the first time in 10 years of Head On that something like this has happened. He had "no clue" why the exhibit, featuring colourful portraits of Sapeurs – members of a Congolese fashion subculture – was targeted.

"We’ve had 10 festivals and we’ve never had any issues with images in the past. No vandalism, nothing was stolen, nothing disappeared. A tiny bit of graffiti last year … but people generally speaking are very respectful," he said.

Mr Rosenzveig said he hoped the artwork was returned by whoever took it, or anyone who sees it.

"We just probably have to reprint it. My concern is not the cost of the printing. My concern is it will take a few days to print, meanwhile people cannot see the work." 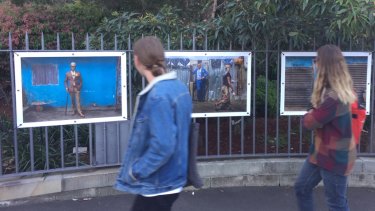 Tariq Zaidi’s photographs on display at the Royal Botanic Gardens before they were stolen. Credit:Head On

He also said he was concerned about the artist's copyright and the disrespect shown for Mr Zaidi's work – and what it could mean for the festival in future.

"There’s not much else we can do with this. We live in an environment where we hope people can enjoy these things and don’t basically destroy it for other people.

"If it happens more, we won’t be able to do it, and the city will turn into once again a boring place with no stimulating visual material that we have at the moment.

"We've got a number of installations in the city and they’re all very exciting and the response we get from the public, a lot of response from the public over the years, has been how wonderful it is."

Other outdoor exhibitions currently on display for the festival, which runs throughout May, can be found at the Queen Victoria Building, Circular Quay and Pitt Street Mall.

Mr Rosenszveig said those exhibitions are "highly visible" and, unlike the Botanic Gardens location, he believed they have security cameras nearby that should dissuade potential vandals and thieves.

"I just hope people are sensible enough not to do it. There’s no point me getting angry or upset … I’m obviously upset, but there’s not much we can do unfortunately."