The political storm over the treatment of women has given Labor an edge over the Coalition, with 55 per cent of voters saying Prime Minister Scott Morrison has not responded well to a series of scandals.

More voters think Labor is the better party to handle issues affecting women, with 27 per cent backing the party compared to 21 per cent preferring the Coalition on the issue. 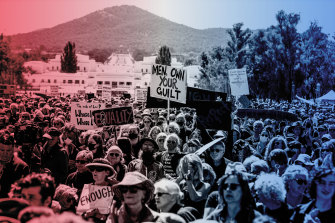 Reserve Strategic’s polling on women’s issues has given Labor an edge over the Coalition.Credit:Alex Ellinghausen

But the treatment of women is not driving voter choice to the same degree as other big policy questions, casting doubt on whether the ferocious debate will have a defining impact on the next federal election.

The findings, in a new survey by The Sydney Morning Herald and The Age with research company Resolve Strategic, show that issues such as sexual harassment, assault and gender equity are named as important by only 5 per cent of voters.

This includes 3 per cent who named the issues as the “most important” for them in deciding their votes, according to a survey of 2006 voters online and by telephone earlier this month.

The Resolve Political Monitor asked people an open-ended question so they could nominate up to three influences on their vote, with the results showing 26 per cent named the economy and 16 per cent named health and aged care.

After two months of intense coverage of the alleged rape of former government adviser Brittany Higgins and the rape allegation against Industry Minister Christian Porter, the results suggest many voters see the issue as a problem for all parties.

“No one party ‘owns’ women’s issues and there’s strong evidence to suggest that many people are seeing recent events as a Canberra scandal or a societal issue, not a voting issue,” said Jim Reed, director of Resolve.

“This is true of many issues, including climate change. They may be important and their handling may reflect on the parties or leaders, but they don’t necessarily move people from one camp to another. The main game is still COVID-19.”

While the media has aired strong criticism of Mr Morrison and his government from prominent women, the survey concludes that women and men have both shifted away from the Coalition since the last federal election.

Mr Reed said this did not mean the issues were not important but suggested they did not have an overwhelming impact on the government’s standing because of the relative power of other issues to influence votes.

The survey asked respondents about their personal backgrounds, including any religious faith, and found that some voters in more conservative cohorts, such as people of Christian faith, had drifted from the Coalition since the last election.

Support for the Coalition in primary vote terms has fallen since the last election among voters who described themselves as Christian, dropping from 56 to 49 per cent.

While support for Labor among this group rose from 28 to 29 per cent, the change was within the margin of error. In a more significant shift, the same cohort increased its support for independents and minor parties from 15 to 22 per cent.

The Coalition has lost ground among voters across the board since the last election, with its primary vote slipping from 41 to 38 per cent, but the shift was strongest among immigrants and people from “non-Anglo-Saxon” backgrounds.

Immigrants have reduced their support for the Coalition from 48 to 40 per cent since the election, while increasing their primary vote for Labor from 30 to 35 per cent.