Politics so rarely engages with females. It’s why many women have lost interest

In 2015, Canadian writer Sarah Hagi tweeted her tip for combatting imposter syndrome: “God, give me the confidence of a mediocre white man”. Since then the phrase has appeared on cups, T-shirts, books, op-eds (including this one) and embodied itself in the current federal election campaign.

Five candidates (one woman and four men) have resigned from their parties or were disendorsed after various foolish comments came to light.  As Ross Gittins of what's left on offer, while the policies might be different for the first time in decades, “[b]oth sides refuse to answer the question, never say yes or no when they could dissemble, keep saying tricky things calculated to mislead, claim to ‘feel your pain’ when they don’t, keep badmouthing each other and answering a question about their policies by attacking their opponents’ policies, and make promises they’re not sure they can keep.” 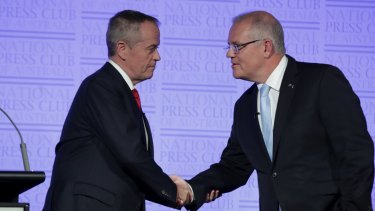 It’s all but impossible to maintain respect for government in the face this endless metronome of folly. Particularly when the few women who seemed to display a modicum of intelligence were ruthlessly pushed aside to further the ambitions of men whose confidence is astronomically disproportionate to some of their abilities. Wherever you stand on the political spectrum, the general malaise and distrust of politicians remains high.

Recent polling by Essential found close to half the country is paying little or no attention to the election campaigns, and this lack of interest is spread fairly evenly across all party allegiances. Nearly a third of the country (more women than men) doesn’t know who they’d prefer as Prime Minister and, unsurprisingly, men were more likely than women to say they have been paying a lot of attention to the election (24 per cent to 14 per cent).

This lack of interest from women is not unsurprising because we shouldn’t expect little lady brains to engage with politics, but rather because politics so rarely engages with women. The last two terms of government have been dominated by men. Women were less than a quarter of Coalition government MPs and an even smaller percentage of senior positions because “merit”, it appears, is found most often in privileged middle-aged white men.

There’s no reason men can’t devise policies and legislation of use and interest to women, but just because they could didn’t mean they did.

There’s no reason such men can’t devise policies and legislation of use and interest to women, but just because they could didn’t mean they did. The gender pay gap remains stubbornly persistent, as does women’s lifetime of economic disadvantage and experience of male violence.

Labor’s capitulation to quotas has significantly increased the number of women in their ranks and resulted in a concurrent increase in their female supporters. It’s not so much a case of them having better policies for women as that they actually have some polices that have included an understanding of the varied lives and experiences of Australian women.

Labor and Bill Shorten have increased their standing in the polls and it’s no coincidence that he’s been making sure the Labor women with proven records have been thrust to the front of his campaign. The Labor campaign launch included speeches by deputy leader Tanya Plibersek, and the Labor leader in the Senate, Penny Wong and even Shorten’s wife, Chloe.

It’s impossible not to wonder how many women who could have risen above mediocrity were prevented from doing so by the boys club.

There’s a feedback loop in the relationship between trust and engagement with politics. The more trust politicians and political institutions earn, the more engaged their constituents become. A recent report by the Museum of Australian Democracy found that “levels of trust in government and politicians in Australia are at their lowest levels since times series data has been available” and women are significantly more distrusting of politicians and political institutions than men. Over 60 percent of women think politics in Australia is sexist and it ranks above workplaces, media and sport as being perceived as the most sexist institution in the country.

Watching the parade of mediocre men wrap a tattered costume of good government around their failure and march proudly down the path of least resistance, it’s impossible to not wonder how many women who could have risen above mediocrity were prevented from doing so by the boys club that allows moribund factional power to prevail over a vision for the nation and the future. I guess we’re unlikely to find out any time soon, but hopefully someone will save us from the overconfidence of mediocre white men before it’s just too late.