If you’re a frequent Popeyes customer, then you’re probably familiar with the company’s beloved Cajun Sparkle seasoning. It’s garlicky, full of pepper, and the perfect addition to any fried chicken order. Now that Popeyes’ new Cajun Sparkle Boneless Wings and Tots are available, you’ll be able to order a meal that’s already covered in the good stuff. In other words, you can skip the seasoning process and dig into your tasty-AF meal. It’s convenient and delicious.

Those of you who haven’t had Popeyes’ Cajun Sparkle Sauce might be wondering what it is (and why it’s so tasty on chicken and tater tots). According to the restaurant, the seasoning features flavors of onion, garlic, black pepper, and red pepper. (I’m going to assume that the peppers inspired its sparkly name, but that hasn’t been confirmed.)

If you’re into those flavors, then you’ll probably love the company’s new Cajun Sparkle Boneless Wings and Tots. Both menu items hit restaurants on Monday, April 29 — but Popeyes’ official announcement didn’t come until Thursday, May 2. With that being said, you can head to your local participating Popeyes restaurant right now and try the flavorful snacks. There are a few ways you can order ’em, though, so listen closely. 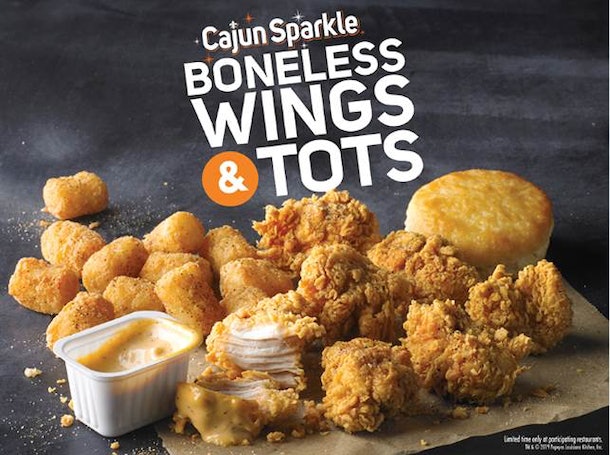 According to Popeyes, the Cajun Sparkle Boneless Wings (made with all-white meat) can be ordered as a seven-piece or a 10-piece combo. However, keep in mind that the 10-piece combo comes with a biscuit, a regular side, and a drink. (If you’d rather not have Cajun Sparkle Tots on the side, you can choose a different one.) Therefore, decide how hungry you are when you visit and order accordingly. Regardless of which option you choose, you should be able to taste the bold flavors of the company’s Cajun Sparkle seasoning with every bite. As for cost, the prices will vary by location, per Popeyes.

The Cajun Sparkle seasoning isn’t the only thing to be excited about while giving this order a try, though. According to Popeyes, an order of the new Cajun Sparkle Boneless Wings and Tots also comes with a side of Cajun Sparkle ranch (YUM). As someone who loves ranch dressing, I’m really excited about this. Based off of a product photo of the meal (pictured below), it looks like the ranch dip is infused with pepper that gives the dressing a "sparkly" look. Delicious and aesthetically pleasing? I’ll take a 10-piece, please. 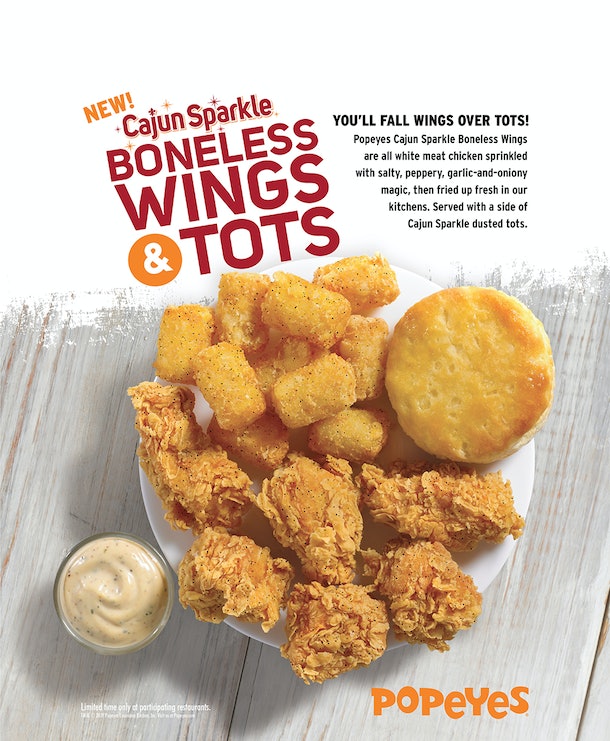 If you’re hoping to try Popeyes’ new Cajun Sparkle Boneless Wings and Tots, I’d do it sooner than later. According to the company, the tasty offering will only be available for a limited time. When it’s gone, you’ll have to go back to seasoning your snacks the old fashioned way.

After you devour your Cajun Sparkle-infused meal, you might want some dessert. Thankfully, Popeyes is featuring a few tasty treats that’ll satisfy your sweet tooth. According to the company’s website, Double Stuf Oreo Bites are currently on the menu for a limited time. Other desserts that are available include Cinnamon Apple Pie, Mardi Gras Cheesecake, and Pecan Pie.

Between Cajun Sparkle-seasoned snacks and sweet desserts, there’s no doubt in my mind that your next Popeyes run will be flavorful.