THE pound fell to its weakest position against the dollar in two years after Boris Johnson threatened a snap general election.

Sterling dropped below $1.20 this morning for the first time since January 2017, following a 0.8 per cent tumble yesterday – its biggest decline in three weeks. 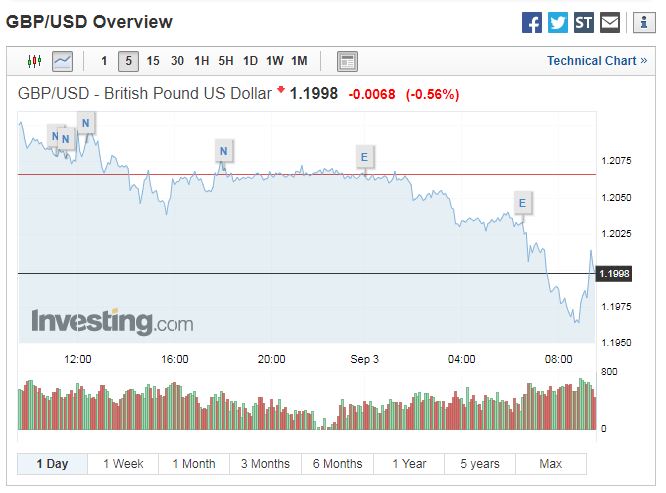 It was trading at $1.1964 this morning. The currency is expected to remain uncertain ahead of today's vote in Parliament, the outcome of which could see a three-month Brexit extension or a no-deal exit more likely.

Yesterday, Mr Johnson promised that if the government is defeated, it will hold a vote tomorrow to approve an early election which would likely be held on October 14.

Some politicians warn that if Britain leaves the EU without a trade agreement then it could weaken the pound.

"The pound is being sold all over the place," said Junichi Ishikawa, senior foreign exchange strategist at IG Securities in Tokyo, "because the political risk has forced us to recognise that a no-deal Brexit is possible.

Is now a good time to buy or sell currency?

IF you're heading off on holiday or have just arrived home and are wondering whether now's a good time to buy or sell currency. Here's what you need to know:

Exchange rates are constantly changing and can go up and down because of any number of reasons.

This means it's almost impossible to even try and time the market, all you can do is make sure you get the best deal when you buy or sell.

Use MoneySavingExpert.com’s Travel Money Maximiser tool to compare rates if you're taking cash – it'll tell you where you can buy your cash for less.

"This diminishes the impact of rate moves (good ones as well as bad)."

And never buy currency at the airport or other ports – it will always cost more.

Use Money Saving Expert's Travel Money Max tool to compare buy back rates to make sure you're not ripped off.

"At this point, I see no reason to stay long in sterling."

The pound also fell against the euro but the drop was far less dramatic.

The strength or weakness of the pound often changes depending on political decisions, and it's fluctuated ever since the Brexit referendum in 2016.

Sterling jumped against the euro in July after Mr Johnson's landslide victory against Jeremy Hunt to become the Prime Minister.

But in August, sterling hit a 10-year low against the euro after he said that he's prepared to leave the union without a deal if it means sticking to the October 31 deadline.

When it comes to getting your holiday cash, there are ways to make your money go further. We spoke to the experts to find out when is the best time for your to change your cash.

Confused about what's going down in Parliament today? We've put together a complete guide to help you understand.