A group of plotters gathered on September 21, 1988, meeting in Melbourne to draw up a detailed and strategic timeline to install a prime minister.

Under the plan, in 10 weeks’ time John Elliott – the then-Liberal Party federal president and boss of $20 billion company Elders – would announce he would stand at a byelection in the blue-ribbon seat of Higgins and overshadow Opposition Leader John Howard’s major policy speech, dubbed Future Directions. 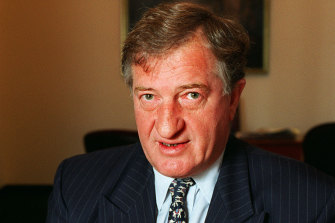 One stubborn hurdle stopped John Elliott and his backers from pulling off a plan for him to become prime minister.Credit:Robert Pearce

In February he would then win the byelection, stroll into the next Liberal party room meeting in Canberra, and call on a leadership ballot. He would have the numbers and he’d go on to beat Bob Hawke the next election and become prime minister. Simple.

Elliott – who died at the age of 79 this week following a short illness – told the group that running the party or indeed the nation would not be that hard.

Kortlang challenged him: “If somebody said running Elders was easy, what would you say?”

Kortlang said: “Well, running a country is going to be just as difficult, John.”

A former diplomat who’d helped Nick Greiner get elected as NSW premier in March that year, Kortlang would later describe Elliott as a Berlusconi-type figure, the charismatic and populist Italian prime minister who won officer without any prior government or administrative experience.

“He oversimplified how simple it would be to run a country,” he told John Howard’s biographer, David Barnett, years later.

But Kortlang said Elliott would have satisfied the Liberal Party’s “messiah complex”.

“He was the messiah that could have delivered that for them. They certainly warmed to him, they certainly saw him as powerful.”

Elliott, who had saved the Melbourne Cup, taken Fosters to the world and was chairman and chief executive of Elders, was going to persuade Liberal MP Roger Shipton to quit his seat so he could take over.

He’d later claim that more than half of the federal Liberal MPs had spoken to him and asked him to enter Parliament and stand for the leadership. He wasn’t thinking about running to be a minister.

There was just one problem. Shipton would not budge, despite being asked to name his price by a group of wealthy Melbourne businessmen backing Elliott.

Elliott would plead that he was never directly involved, but admitted he was later told they threw the kitchen sink at him. Board positions, $400,000 in directors’ fees, international travel and there was even overtures made to secure him an overseas posting.

Then, with Shipton publicly declaring on television he was “not standing aside for anybody”, the climate within his business dealings dramatically changed and, eventually, the dream was dashed.

Elliott would go on to concede that “most businessmen would make terrible politicians”.

“I think, in hindsight, he would have blown up the country,” former Victorian premier, friend and long-time sparring partner Jeff Kennett recalled on Friday.

“I mean he was a force of nature but I think he later came to realise that politics and business is not a good mix.

“He was certainly at his best advising politicians about business, but I don’t think he could ever have been successful as a politician. He just didn’t have the temperament. But it was very real. It nearly came off.”

Kennett said Elliott’s legacy to the party is through The 500 Club – a Liberal fundraising organisation that helped bankroll his own win at the 1992 Victorian election.

He said corporate Melbourne quickly found out that if you weren’t part of The 500 Club, then you weren’t a mover or shaker in corporate or political life.

“The functions that John Elliott held, there was no holding back,” he said.

“They were loud, they were colourful, everyone was there. He was always very opinionated, but he was always opinionated in the things that he believed in. A scallywag, obnoxious when he wanted to be. That was John, he was larger than life.”

Elliott, who became a Liberal member in 1970, would serve as Victorian Liberal Party treasurer and federal treasurer from 1985 to 1987 and eventually become president for three years following the party’s election loss. And Howard, who was losing support within his party room and among voters, would be a victim of Elliott’s bravado.

“I thought Elliott was a very unfortunate federal president for the Liberal Party,” Howard would say years later.

“Although I supported him coming into the position after the 1987 election, he just couldn’t play the quiet role.”

Howard was furious that Elliott had “dumped” on the party the day before a 1988 byelection in Adelaide.

“I went for him, I said it was an irresponsible act and disloyal to me and unhelpful,” Howard told an ABC documentary in 1994.

“He wanted the leadership for himself and I think he always wanted it, sort of, the day after we won the election.”

Howard, who of course would later become Australia’s second longest-serving prime minister, put any grievances aside long ago.

He said on Friday that if anyone fitted the description of being a “larger than life character” it was Elliot.

“He brought enthusiasm to everything he did, be it business, sport or politics. John was a resilient man who always bounced back from any adversity,” he said.

Michael Kroger, a long-time Liberal powerbroker who was deputy chairman of the Higgins branch, says Elliott’s contribution to the party through fundraising was “remarkable”.

“With [former Melbourne lord mayor] Ron Walker, John was the party’s greatest-ever fundraiser. When the Liberal Party was friendless in the late 1980s, John Elliott publicly stood up for our principles and ­beliefs,” he said.

“But I think we should be thankful he never went into politics,” he said.

Kroger says Elliott lacked the “subtlety and nuance” which would have been required to be a great leader, despite the charisma and larrikin-style he brought to corporate Australia.

Prime Minister Scott Morrison said Elliott remained loyal to the party in what were lean times throughout the 1980s at both a state and federal level.

“Big lives always have their critics, make their fair share of mistakes, but mostly, there is something about them that capture their times,” he said.

“Such people are leaders. John Elliott was such a leader.”