Prince Harry chats to children and cradles a newborn during walkabout

Harry, the ‘gentle’ prince! Fans gush over the royal chatting to children about their favourite football teams and cradling a baby during the walkabout at Windsor

Prince Harry spoke with small children and cradled a newborn as he greeted people mourning the Queen yesterday.

Social media dubbed Harry ‘gentle’ after he met mourners in Windsor alongside the Prince and Princess of Wales and his wife Meghan, Duchess of Sussex.

The former working royal chatted about football teams and held possibly the youngest person in the crowd as he cradled a newborn yesterday.

The children said they were all in the same family but one of their relatives was a Newcastle fan. 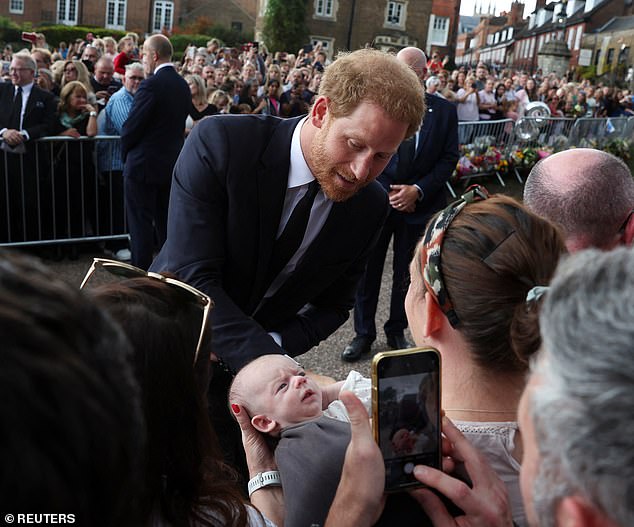 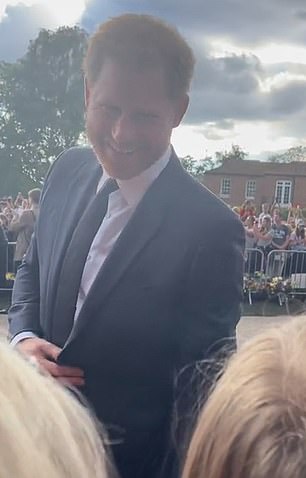 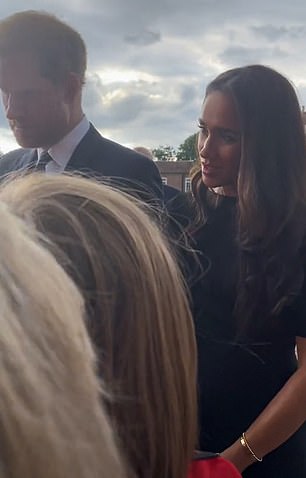 The Prince replied ‘ooh’ before asking one of the kids ‘and how does that make you feel?’

He beamed a wide smile as he chatted to their parents, asking them how long they had been waiting.

When they told him it had been an hour and a half he nodded and told them ‘thank you for coming’.

He and his wife were touring the UK before the Queen passed away on Thursday aged 96 at Balmoral Castle.

The pair were seen holding hands as they met the public in Windsor yesterday.

She chose a cut that fell midway on her calves, while she had short sleeves over her shoulder.

She paired the dress with minimal golden jewellery on her left wrist as well as understated earrings and styled her hair into loose curls.

Meghan cut a stylish figure in a black midi dress, matched with black tights and minimal black pumps. Harry wore a navy suit with a crisp white shirt and a black tie, which he paired with polished black brogues. He wore a low-key black wristband with lime green trim on his right hand 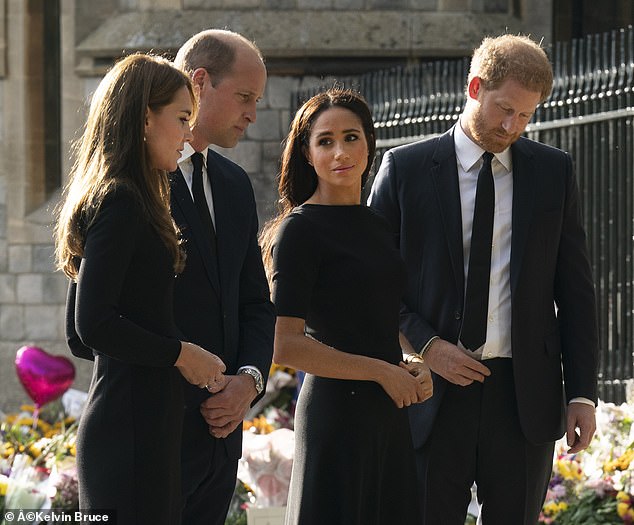 Meghan is seen gazing at Kate as the four admire the floral tributes left to the Queen. Afterwards, the four met well-wishers

Harry wore a navy suit with a crisp white buttoned shirt and a black tie, which he paired with polished black brogues.

He wore a low-key black wristband with lime green trim on his right hand.

Prince Harry and Meghan Markle’s popularity has plummeted in the last few years after their exit from the royal family in 2020, dubbed ‘Megxit’.

Controversial interviews and wild allegations, some of which have since been disproven, have also stoked a rift between the Sussexes and the rest of the Royal Family.

However, the tide may be turning for the unpopular couple.

In his first address to the nation as King, Charles III said he wanted to ‘express my love for Harry and Meghan as they continue to build their lives overseas’.

Meanwhile, Prince William offered an ’11th hour’ olive branch to his brother as he invited the California-based couple to meet the public alongside himself and Princess Catherine.

The public too have warmed once more to Harry and although some blanked Meghan and seemed to refuse to shake her hand, one girl even hugged the American actress.

It could be the first signs the British public is willing to forgive Harry and Meghan for peddling slurs and flinging accusations at the Queen and the Royal Family in the last few years.

However, reconciliation may be difficult if future publications by Harry and Meghan create more difficult conversations at the Palace.

Meghan has just started a podcast series on Spotify, for which she is receiving around $18million, while Harry is poised to release a memoir with Penguin Random House that reportedly granted him a $20million advance payment.

Even so, crowds have cheered and clapped the royals in the days following the death of the Queen as the public has paid tribute to Britain’s longest-reigning monarch.