There was a time when every contemporary artist claimed their work was “subversive”, as if a boring painting or video might bring down global capitalism. Paradoxically, this feat was to be accomplished by selling works to museums and wealthy collectors for high prices, enabling the rebellious artist to enjoy all the benefits of a system he or she despised. 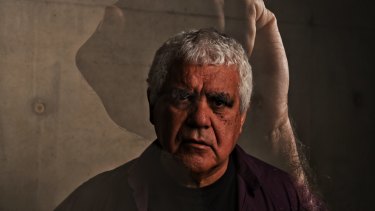 That was before the contemporary art market became the multi-billion dollar business it is today. In an art scene dominated by super-salesmen such as Jeff Koons and Damien Hirst it’s laughable to imagine art as anything but the handmaiden of money and power. As high-end art has grown more expensive the rhetoric has become less political. Koons assures us that his giant-sized kitsch sculptures are really about “Looove”.

Amidst all the confusion and mixed messages, one area that has made huge advances is Indigenous or “First Nations” art. Not long ago this work was treated with disdain, as a kind of folk art. Nowadays the public galleries are competing with each other to demonstrate the greatest commitment to the field.

Richard Bell is both a symptom and a beneficiary of this newfound adoration of all things indigenous. Since the early 1990s Bell has been making spikey, irreverent works that combine political activism with the artistic equivalent of stand-up comedy. He draws much of his imagery from modern and contemporary art and takes his humour from the streets. His abiding theme is the way Aboriginal people have been treated – and continue to be treated – by those who colonised this land and declared themselves its masters. 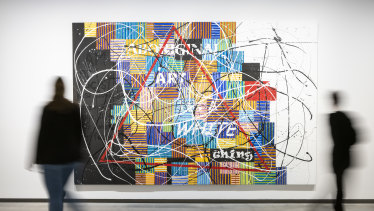 It’s not hard to discern racist attitudes in many of the policies that even the most well-meaning authorities have inflicted on Indigenous Australians. One of Bell’s favourite tactics has been to turn the tables on white paternalism. A photo-sequence from 1992 called Ministry Kids (Children’s Parliament) features black-and-white portraits of seven Aboriginal children. Each is supposedly in charge of a government ministry or two. The little girl at the very end is identified as the Minister for White Affairs, Employment and Industry.

Not only does this make us feel acutely aware of the implications of having a special Ministry for Aboriginal Affairs, it suggests that when it comes to running the country, a bunch of kids could do a better job than the current crop of politicians.

The large painting, Scientia E Metaphysica (Bell’s Theorem) (2003), is emblazoned with the statement: “Aboriginal art. It’s a white thing.” What Bell’s saying is that the so-called Aboriginal art industry is ultimately controlled and regulated by white people who also benefit financially. This undermines the positive view that the art boom has helped restore pride and awareness of culture among communities while bringing in much-needed income. Bell’s provocation invites us to take up the argument as to who has got the most out of the Aboriginal art market – the artists or the dealers? 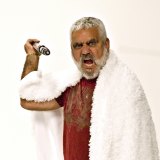 The artist in a still from his video Scratch an Aussie. Credit:Anna Kucera

As for the actual painting, the neat, stripey squares of colour and Jackson Pollock-style swirls are borrowed from white artists, while the real “Bell’s Theorem” was devised by physicist, John Stewart Bell, in 1964. Abstract art? Quantum mechanics? To Richard Bell they’re both “white things”.

Bell invites us to take up the argument as to who has got the most out of the Aboriginal art market – the artists or the dealers?

The very fact that Bell is willing to divide the world into racial categories of black and white is an affront to those who would like to avoid such stark demarcations and pretend we’re “all the same beneath the skin”. The skin, alas, is the problem. We don’t have the kind of vision that can ignore the surface and see to the depths of a person’s soul.

Having spent his childhood in a tin humpy in Charleville, Bell has first-hand experience of what it means to be judged by virtue of your race. Curator Clothilde Bullen puts it bluntly when she says that being Aboriginal generally meant “you are at the lowest rung of the ladder”. 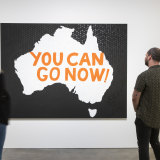 Bell’s are not the kind of pictures a nice middle-class household would hang on the wall as in Immigration, 2017.Credit:Anna Kucera

Bell has been climbing that ladder for the past two decades, making outrageous jokes, exploiting white liberal guilt and playing the larrikin. He delights in saying things white people simply can’t say. In his video, Scratch an Aussie (2008), he plays a psychiatrist, analysing blonde-haired white kids in golden swimsuits, who mouth racist clichés and “Abo” jokes.

In the tremulous heart of American white liberalism there is a growing belief that any work containing terms now deemed racially offensive must be expunged from the curriculum. Huckleberry Finn, for instance, or Uncle Tom’s Cabin. What would these censorious types make of Scratch an Aussie? To self-styled identity police such as sociologist Robin DiAngelo, only white people can be racist, so perhaps it would be OK for Bell to say the unsayable. Even if this were the case such a work can’t fail to make viewers uncomfortable – and that’s the whole point of the exercise.

Bell is not merely a jester licensed to make fun of social and cultural orthodoxies, he’s an irritant in the system. His work can be rude and vulgar, and not only in his use of words. His taste for bright, Pop Art colours is also intended to get into the viewer’s face. These are not the kind of pictures a nice, middle-class household would hang on the wall. They are made for museums and more “advanced” collectors eager to advertise their anti-racist credentials. 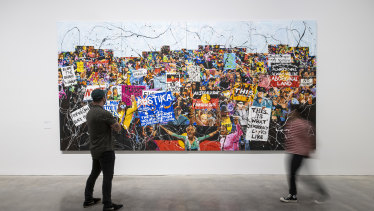 Bell’s taste for bright, Pop Art colours is also intended to get into the viewer’s face as in ,From Little Things, BigThings Grow, 2020.Credit:Anna Kucera

If Bell’s career might be defined by one piece it would have to be Embassy, which first appeared in 2013 and remains a work in progress, even after its joint acquisition by the MCA and Tate Modern. Inspired by the Aboriginal Tent Embassy in front of the old Parliament House in Canberra, it’s basically a large marquee in which visitors sit and watch videos or listen to talks. Part archive, part circus big top, embellished with signs and slogans, Embassy has been shown in so many different places it has become an icon of activist art.

This activist spirit is the animating force that drives Bell’s work, leading him to always seek new ways of creating a disruption. One of the most successful has been his consistent argument that white society should be paying financial compensation to Aboriginal people for stealing and occupying their land. You may recall this was the very reason former Prime Minister, John Howard, refused to apologise to the stolen generations: he believed it would open the door to lawsuits seeking reparations. 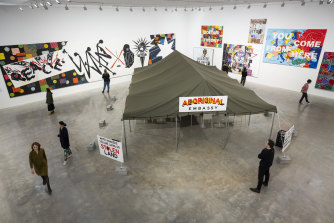 Inspired by the Aboriginal Tent Embassy in front of the old Parliament House in Canberra, Embassy is a large marquee in which visitors sit and watch videos or listen to talks.Credit:Anna Kucera

“Pay the rent!” shouts Bell, in confirmation of Howard’s worst suspicions. It’s a demand that has the power to unsettle sympathetic politicians as well, because it implicitly suggests the famous apology under Kevin Rudd was nothing more than an empty gesture intended to make white people feel better while doing nothing to alleviate the day-to-day problems of Indigenous people. Many will feel there’s something impolite and ungrateful in spoiling the sacred glow that still hangs around the apology, not to mention the endless acknowledgements of elders, past, present and “emerging” that are now obligatory features of all official engagements.

Bell might reply: “What does all this caring and sharing stuff mean if it doesn’t put a dollar in the poor blackfella’s pocket?” The answer might be that we have to start with good will and kind words before anything like a treaty – let alone reparations! – appears on the horizon. Nevertheless, if we are ever to move on from precious, symbolic gestures there might be a starring role for an outspoken artist-activist-satirist who refuses to play by the rules.

Richard Bell: You Can Go Now, Museum of Contemporary Art, until November 7.