The Queen and Prince Philip were married in a beautiful ceremony in Westminster Abbey on November 20, 1947. Taking place only two years after the end of the Second World War, the royal couple’s wedding lifted the spirits of the nation.

The night before the wedding, Philip had a stag do at the Dorchester Hotel in Mayfair, London, with fellow naval officers and his uncle Lord Mountbatten.

It has been reported that on the morning of the big day, Philip had a small gin and tonic before heading to Westminster Abbey, while Princess Elizabeth sipped on a cup of tea.

The Princess, who was to become Queen a short few years later, left Buckingham Palace at 11:15am and rode with her father, King George V1, in the royal Irish State Coach.

The public were given the first glimpse of Elizabeth’s much-anticipated beautiful white gown before the ceremony began at 11:30am. 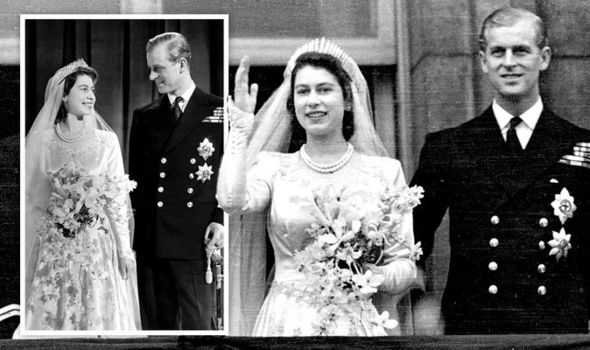 Elizabeth’s white dress was designed by Norman Hartnell and made from ivory silk, duchesse satin, and silver thread.

It featured crystals, as well as 10,000 pearls, and had a fitted bodice, a heart-shaped neckline, long sleeves, and a 15 foot train.

It was made in just seven weeks by 350 skilled women due to the fact that the wedding took place only four months after the couple’s engagement announcement.

The princess paired her gown with a tiara, called the Queen Mary Fringe Tiara since it belonged to her grandmother, Queen Mary, who had been given the jewel as a gift in 1893.

The tiara was originally remade from one of Queen Victoria’s jewels and was bought from Collingwood and Co.

Other guests in attendance including were the King of Iraq, Princess Juliana and Prince Bernhard of the Netherlands, the Hereditary Grand Duke of Luxembourg, and Princess Elisabeth of Luxembourg. 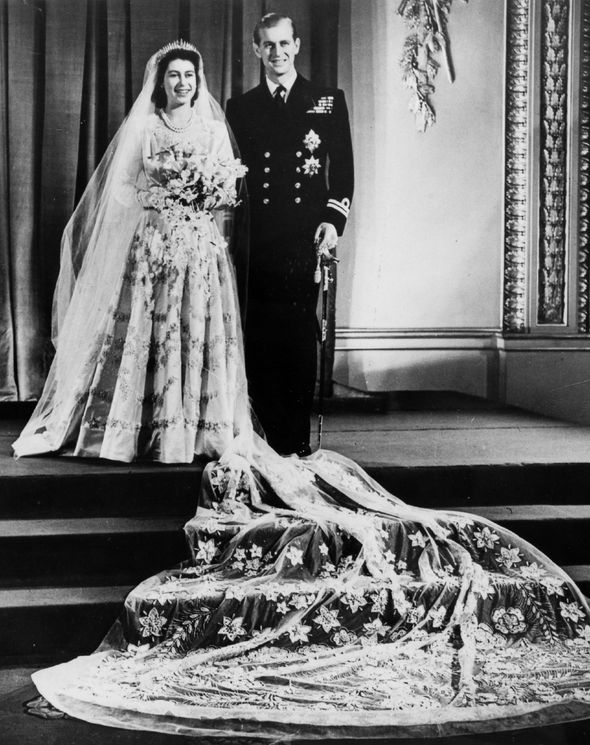 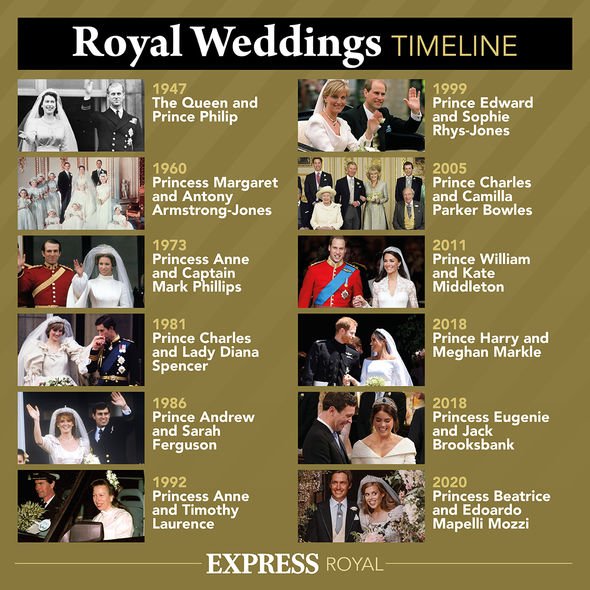 After the ceremony, a wedding breakfast was held at lunchtime in the Ball-Supper Room at Buckingham Palace.

Only 150 guests were allowed to attend, and a string band of the Grenadier Guards entertained.

As for the wedding cake, a traditional fruit cake was baked for the royal couple by McVitie and Price, measuring nine feet in height and featuring four tiers.

It was decorated with a coat of arms, the monograms of the bride and groom, sugar-iced figures, and regimental and naval badges.

The newlyweds cut the cake using Prince Philip’s Mountbatten sword, which was given to the couple as a wedding present from Elizabeth’s father.

After the wedding breakfast, Elizabeth and Philip, joined by the Princess’ corgi, Susan, caught a train from Waterloo station to Hampshire.

The couple spent their wedding night in Broadlands, the home of Philip’s uncle, Earl Mountbatten.

Elizabeth and Philip spent the rest of their honeymoon at Birkhall, on the royal family’s Balmoral Estate in Scotland.

Scotland held a special place in the couple’s hearts as this is where the prince also proposed to Elizabeth, in 1946.

Elizabeth was said to be rather taken with Philip and the couple began to write letters to one another, before meeting up.

It has been said on numerous occasions that the Queen and Prince Philip married for love, above all else.