Indigenous rangers in a remote region of Western Australia have taken photographs of a night parrot, fanning hopes that more of the elusive and very rare birds may be in the wild.

The Martu rangers, who care for country including the Great Sandy, Little Sandy and Gibson deserts, photographed a parrot two weeks ago while installing sound recorders in an area where they expected the birds might be living. 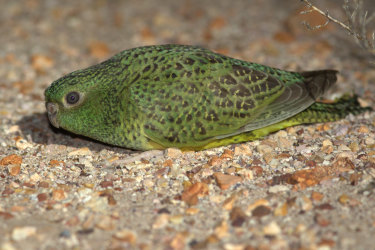 A photograph of the elusive night parrot, located in a remote region of Western Australia.Credit:Steve Murphy

The rangers flushed one bird out and sound recordings indicated a second bird was nearby. They also caught only the fourth confirmed photograph of a night parrot in flight.

“We think they’re likely to be a breeding pair, so that’s pretty exciting,” said Dan Johanson, a Healthy Country Officer with the Martu, adding, “It’s stunning country out there.”

The birds seem to prefer areas around salt lakes that seem more protected from big fires, he said.

Numbers of the birds may reach into the hundreds but “there’s not a huge amount” of them. 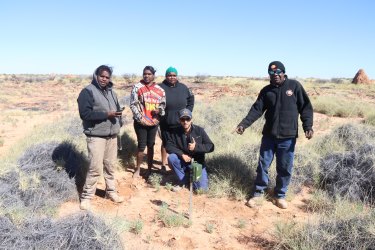 Nick Leseberg, who is close to submitting his doctoral research on night parrots and has been working with the Martu, said the parrots typically spend their days in tunnels under humps of spinifex grass and emerge only when they are disturbed.

From 1875 until 1990 there was no conclusive proof the parrots still existed. Between the first European sighting of the bird in 1845 until 2020, people lodged 240 reports about the bird, mostly by those claiming to have heard the parrot’s distinctive “croak” call, Mr Leseberg said.

Other than at about a dozen sites in northern inland Western Australia, identified by sound recordings, the birds have also been located at the Pullen Pullen conservation area in south-west Queensland.

The latest sighting “gives us hope there’s more out there”, he said. “It’s promising.” 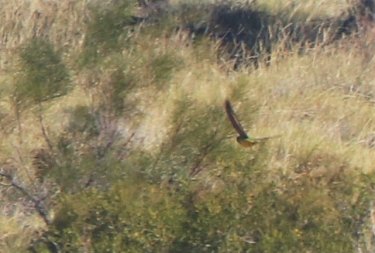 A night parrot taking a flight in broad daylight.Credit:Kanyirninpa Jukurrpa

Software has helped researchers identify more of the birds’ calls and work with traditional owners is narrowing down where to go to improve the odds of finding the parrots.

“The sighting is a tribute to Aboriginal ranger groups who have been venturing into the remote West Australian desert to improve our knowledge of night parrots as part of the Threatened Species Strategy,” she said.

“A fundamental challenge for protecting and recovering the night parrot is simply locating those existing populations, and that is why this fleeting glimpse captured by Martu rangers is so exciting.”

One key is to identify the types of thick spinifex grass under which the birds favour tunnelling. “Night parrots exist in places with a history of infrequent burning,” Mr Leseberg said.

The return of more active fire management by traditional owners is helping to ease the threat of the big grass fires that destroy the thick spinifex humps that take decades to develop. Cats are the other main threat.

Over time, though, the prospect of more extremes from global warming could also overwhelm efforts to control fire, Mr Leseberg said. “Climate change is the problem coming down the road.”

In need of some good news? The Greater Good newsletter delivers stories to your inbox to brighten your outlook. Sign up here.