Families say the commercial operator behind Melbourne’s largest remaining aged care cluster has failed residents after a second outbreak at one of its homes.

Aged care operator Estia runs the Keilor Downs centre, which has recorded 51 coronavirus cases in a second outbreak at the home, following an earlier cluster it had overcome in August. 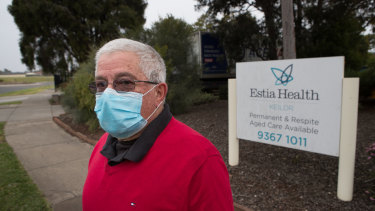 Estia has had the highest number of coronavirus cases across all of Victoria’s private and not-for-profit homes.

Ten of Estia's 23 homes across Melbourne have recorded a total of 392 coronavirus infections since July. Estia is one of the state's biggest aged care operators, with 1800 residents – making it more likely to record big numbers.

Across Estia’s Melbourne homes, 35 residents have died with coronavirus. By comparison, not-for-profit St Basil’s Home for the Aged in Fawkner had 45 deaths. Two other commercial chains, Bluecross and Japara, have recorded more deaths than Estia (Bluecross has had 45, and Japara 41).

In August, Estia staved off the first outbreak at the Keilor Downs centre, keeping infections to just nine people. The second wave that started at the home in September has now been the cause of five deaths from 51 cases – 23 of these cases were still active as of Thursday.

That second outbreak started when a resident returned to his shared room at Keilor following a stay at Footscray Hospital, where he acquired COVID-19.

Five families of residents at the Keilor home have told The Age they were disappointed the operators had failed to stop a second outbreak. 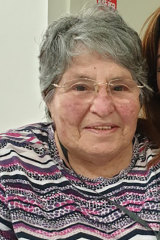 Rita Desira, 94, is now in hospital with coronavirus. She is asymptomatic.

But for the past two weeks, the 94-year-old has been in Epping Private Hospital, having tested positive to coronavirus. She is asymptomatic, but son Joe is incredulous the outbreak was allowed to spread after the first cases in August.

“It’s a lack of due care,” said Mr Desira. “From what I can gather, after the first outbreak, once they got clearance from the Department of Health and Human Services, they went back to not wearing any personal protective equipment because they had nothing to worry about any more.”

A spokeswoman for Estia said that while from time to time within the centre some staff were not in full PPE constantly, all were directed to wear gowns and gloves, as well as masks and face shields, when in close contact with residents.

Mr Desira pointed to two of Estia's other homes as evidence it had handled the pandemic poorly. “What lessons did they learn from Ardeer and Heidelberg?” he said.

Those two Estia aged care homes were two of Melbourne's hardest hit, with Ardeer recording 165 cases and 17 deaths, and Heidelberg 122 cases and 10 deaths.

Since the first death occurred in Victorian aged care in July, 646 residents have died with coronavirus. Active aged care cases have now plummeted, from a high of 2077 in mid-August to just 50 on Wednesday. Estia, with 392, has had the most cases in Melbourne. Another for-profit operator, Bluecross, has had 301 coronavirus positives and not-for-profit BaptCare 281.

Estia is a listed company founded by Peter Arvanitis, a co-owner of Heritage Care – which operates Epping Gardens where 38 residents have died with coronavirus, and which is now being sued by families and staff for neglect and failing its duty of care. Mr Arvanitis sold his shares in Estia in 2016 for $55 million and he is not involved in the day-to-day management of the homes.

Estia is now run by a board that has tried to reinvent the company. The company posted a half-year after-tax profit of $14 million in February before the pandemic hit Australia.

Its fortunes have since crashed, with its share price tumbling from almost $3 in November to $1.43 on Wednesday.

Mr Desira said he was speaking publicly about his disappointment with the company because it was not only residents like his mother affected, but all of the staff members – 22 of whom have acquired coronavirus at the Keilor centre. “They’ve got families to go home to, too.”

A spokesman for Estia's management said the impact of the coronavirus outbreaks in his company's homes had been significant for both residents and their families. "We feel for each and everyone who has either suffered loss or been unable to visit their loved ones on a regular basis," he said.

Estia's spokeswoman said that, in addition to regular virtual meetings with families held by Mr Thorley, "we have added extra resources and support so that families are individually updated about their loved ones, including the families of those residents transferred to hospital. Families can also access a dedicated support phone line for the home".

Aged Care Minister Richard Colbeck said the federal government, which has responsibility for homes, "continues to closely monitor aged care providers, including Estia Keilor, as we combat the impact of COVID-19".

He said the group set up by the state and federal governments, the Victorian Aged Care Response Centre, was working with local health authorities and the facility to minimise further spread of the virus, including transferring negative residents to hospitals. "I understand DHHS is currently undertaking a review of this case," Mr Colbeck said.

Two of Estia’s Melbourne homes – Ardeer and Heidelberg – have sanctions against them from the federal government, and in all seven of its homes have had similar warnings over the past two years.

Estia’s Ardeer, Heidelberg and Keilor Downs homes all scored perfect marks when assessed by the Aged Care and Quality Safety Commissioner (or predecessor agencies) in the past two years.

Mr Desira said he was furious at the seeming lack of communication between the federal and state governments, and with the federal regulator.

“The home can do whatever they want because the state doesn’t have any authority once the outbreak is resolved. But then you don’t know if the federal regulator is paying attention to the problems that caused the outbreak in the first place,” he said.

Our weekly newsletter will deliver expert analysis of the race to the White House from our US correspondent Matthew Knott. Coming soon. Sign up now for The Sydney Morning Herald‘s newsletter here, The Age‘s here, Brisbane Times‘ here and WAtoday‘s here.