The British royal family uses social media to keep fans informed about engagements and charitable works, but they’re always sharing personal photos, too. For every birthday without fail, the royal family members use Instagram to send good cheer to each other. They did just that for Prince Harry on Sept. 15, 2020 — his 36th birthday.

However, the seemingly innocent photos sparked a bit of controversy. Royal followers couldn’t help but notice how all the photos of Prince Harry his family members shared were missing one important person. Did they do it on purpose?

In honor of his brother’s birthday, Prince William and Catherine, Duchess of Cambridge posted a lovely photo of them running a foot race with Prince Harry. In it, Harry surges ahead as the three family members all laugh with glee. “Wishing a very happy birthday to Prince Harry today!” the caption says along with the balloon and cake emoji.

Most fans flocked to the comments to share their own birthday wishes for the Duke of Sussex. But certain followers took a more wistful approach, saying Prince Harry looked happier in this old photo than he has in so long.

They claimed the imaged recalled happier times before all the drama with Meghan, Duchess of Sussex and Harry leaving the royal family.

Fans pointed out how Meghan Markle wasn’t in the photo 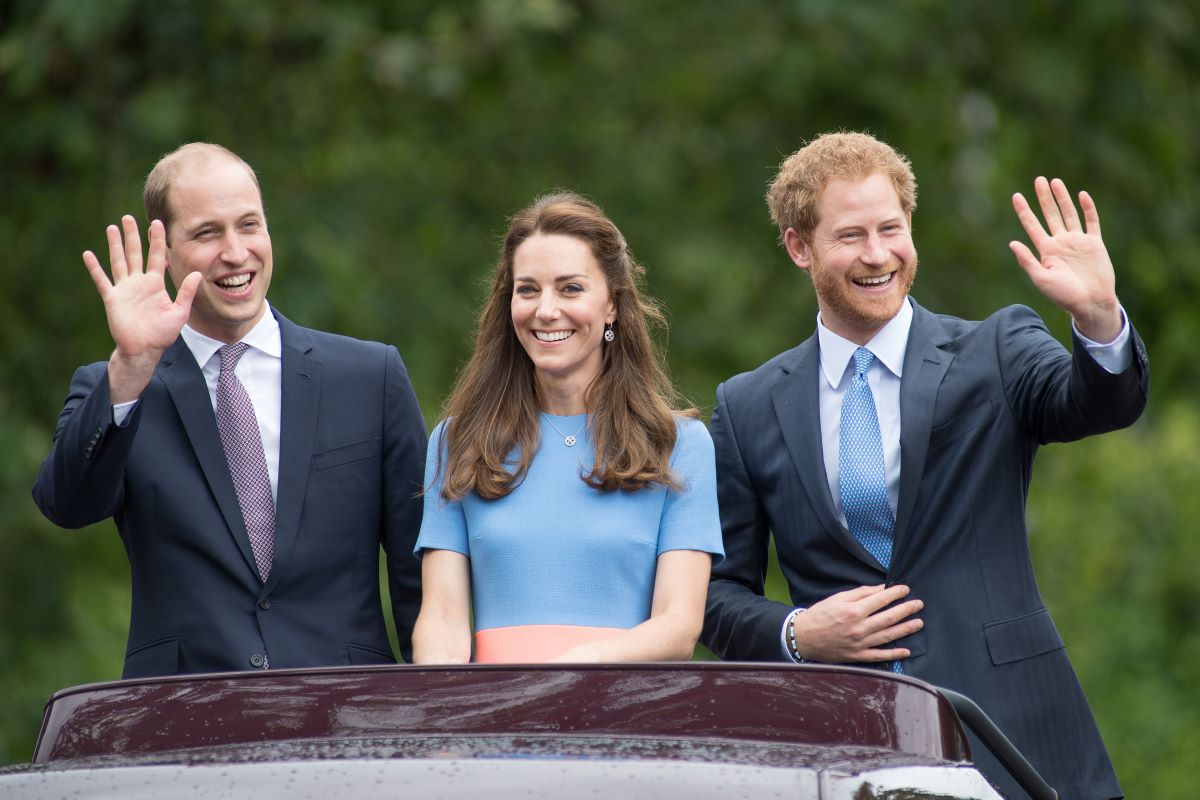 There are dozens of photos of Harry, Meghan, William, and Kate all together. But in their birthday tribute, the Cambridges selected a snapshot without Meghan present — and one where the trio, who used to be so close, looked exceptionally joyous together. It may have been a total coincidence. However, royal fans are wondering if it’s a subtle way of insulting Meghan.

“The shade of them using this pic rather than one including his wife,” one Instagram user wrote with the tea emoji. Many other followers expressed similar sentiments in the comments section.

Queen Elizabeth shared a photo without Meghan Markle, too

🎂 🎈 Wishing The Duke of Sussex a very happy birthday! . 📸 The Queen and The Duke during a Queen’s Young Leaders reception at Buckingham Palace in 2017.

If one time is a coincidence, then two times is a pattern. Perceptive royal followers noticed that the photo shared on the main royal Instagram account, @theroyalfamily, also excluded Harry’s wife Meghan.

The birthday remembrance they shared showed Prince Harry, again smiling hugely, attending an event with his grandmother the queen at Buckingham Palace in 2017. The caption said, “Wishing The Duke of Sussex a very happy birthday!”

Many commenters again lamented the Duke of Sussex leaving the royal family and his home country to live in California with Meghan and his son, Archie Harrison. Some got snarky while others were sad. Overall, fans seemed to wish Prince Harry was getting along with his family again.

It’s worth noting that Harry and Meghan had met already but were not married when the image was taken.

This afternoon, The Duke and Duchess of Sussex attended the annual Commonwealth Service at Westminster Abbey on Commonwealth Day, alongside Her Majesty The Queen and Members of The Royal Family. The Commonwealth is a global network of 54 countries, working in collaboration towards shared economic, environmental, social and democratic goals, and the Service today seeks to highlight the vast community which spans every geographical region, religion and culture, embracing diversity amongst its population of 2.4 billion people, of which 60 percent are under 30 years old. As President and Vice-President of the @Queens_Commonwealth_Trust, The Duke and Duchess of Sussex have been passionate advocates of the Commonwealth having spent many years working closely with the next generation of Commonwealth leaders. The theme of the Commonwealth for 2020 is ‘Delivering A Common Future: Connecting, Innovating, Transforming', placing emphasis on youth, the environment, trade, governance, and ICT (Information and Communications Technology) and innovation. From working to protect the earth's natural resources and preserving the planet for generations to come, to championing fair trade and empowering the youth of today to transform the communities of tomorrow, the Service celebrates the Commonwealth's continued commitment to delivering a peaceful, prosperous and more sustainable future for all. Photo © PA

No one is exactly sure what kind of relationship Harry and Meghan will have with the royal family in the future. Their roles are completely different following their abrupt departure in January 2020, and now with their new Netflix partnership, the couple seems to be moving even further from the crown and closer to the entertainment industry.

Harry and Meghan have a message and a platform. Fans are just hoping that with or without his blood relatives present, Harry can recapture some of the happiness he’s shown before.