Apple’s foray into the it-came-from-outer-space space comes with grand ambitions and a mighty budget ($US200 million). It starts in rural America, where a God-fearing sheriff on his last day on the job (Sam Neill) ponders whether his life has had purpose, and then gets way more of a mission than he could possibly have hoped for when a crop circle (that old chestnut) appears in a corn field where a couple of meth-head farm boys were last seen.

The impact and devastation, though, is global, our lens on it fractured across multiple storylines and locations; the 10-part series was shot in the US, UK, Japan and Morocco. On the upside, that allows for different approaches to the central question of what it would mean for the planet to be invaded. On the downside, it means our investment is stretched rather thin at times. 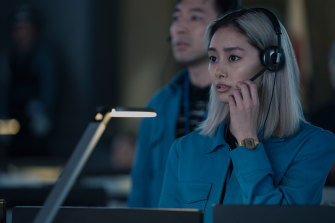 In Long Island, we get an immigrant couple (Iranian actress Golshifteh Farahani as Aneesha Malik and Israeli Firas Nassar as Ahmed) whose imploding marriage is saved by exploding houses. As they make a dash with their two young children, we move from Scenes From a Marriage territory to A Quiet Place.

In Afghanistan, a Special Forces sergeant (Shamier Anderson) sees his entire squad wiped out, and has to rely on the kindness of those in whose land he is both stranger and invader. How much easier it would be if he spoke their language, or could resist pointing his gun at everyone he meets.

In an echo of Denis Villeneuve’s masterful Arrival, Japanese space agency communications specialist Mitsuki (Shioli Kutsuna) is determined to make contact with the aliens that seem to have destroyed the space shuttle that carried her girlfriend. And in the UK, a school bus goes off a cliff and into a giant pit, killing the only adult on board and leaving the kids to work out the new rules of survival in this grave new world. It doesn’t take long to work out who the Piggy, Jack and Ralph are going to be. 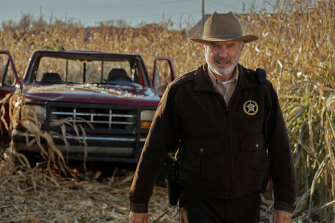 Field of screams: Sam Neill plays a sheriff on his last day on the job. Uh-oh.Credit:Apple TV+

Like the Anglo-French War of the Worlds (the one with Gabriel Byrne), there’s some strange connection between the invaders and kids who are marked in some way as outsiders in our world. Unlike that show, it takes a long time for us to get a clear sense of the threat – until the sixth episode, the aliens are barely glimpsed – and when we finally do see them it’s a bit of a letdown: they’re like oversized sea urchins on spindly spider legs. For all that money, we might have expected more.

The plotting is occasionally a letdown too, bordering on infuriating. Take Aneesha, for instance. She’s such a traditionalist that she abandoned her medical career before it had even started to raise kids. But as chaos erupts she abandons her kids in order to help the medical effort, only to suddenly remember the kids and abandon triage. I know these are confusing times, but what the …?

Apart from the chaos and terror and bad decision-making, what Invasion is most interested in is the idea of communication. Between husband and wife, between US soldier and Afghan goat herder, between a radio specialist and the aliens, the imperative is the same: to “only connect”.

More than a century on from Howard’s End, E.M. Forster’s plaintive plea retains all its power as a maxim that might save humanity from its worst impulses. Who knows, it might even save us from space invaders. If ET does see our light on and decide to drop in, it would help to know if he’s come for tea and a chat, or to take a baseball bat to the furniture.