Scott Morrison to push on with net zero target despite Nationals

Prime Minister Scott Morrison has told Liberal colleagues he will forge ahead with a cut to carbon emissions to net zero by 2050 in a crucial call on climate policy that cannot be blocked by a small group of opponents in the Nationals party room.

Mr Morrison said the climate target would be decided by federal cabinet without legislation in Parliament, making it clear rebel MPs will not stop the government from making the target a binding pledge at the upcoming United Nations climate summit in Glasgow. 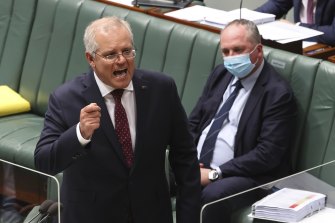 Prime Minister Scott Morrison said the government would push on with a net zero by 2050 target, despite protestations from some Nationals MPs.Credit:Alex Ellinghausen

Nationals leader Barnaby Joyce warned of a “ripple effect through the Coalition” if he and his party were forced to submit to net zero, but others in his party room said the target was likely to gain majority support after days of wrangling.

The Nationals are demanding more spending on regional Australia, a long-term plan for jobs and a willingness to explore nuclear energy amid talk of a climate policy package costing billions of dollars.

Liberals said Mr Morrison’s message gained “overwhelming” support from their party room on Monday as well as a reluctant acceptance from conservatives who did not want net zero by 2050 but knew it would become government policy.

“He’s being very careful not to disregard anyone but at the same time he is saying: this is happening,” said one Liberal.

Mr Joyce conceded on Monday night that the outcome was up to federal cabinet rather than the party room, but he argued it was better for the government to let the Nationals have their say.

“It is correct that a decision of cabinet is not a decision that comes to a vote or has anybody crossing the floor,” he told Sky News.

“But I’ll add to that: a decision of cabinet that does not carry the view of [some] cabinet ministers has a couple of outcomes … and some of them are not what you want for harmonious government.”

A fight is brewing over a separate target to cut emissions by 2030 after Mr Morrison used Parliament to confirm he would not raise the government’s existing goal, seen by environmental groups as inadequate if the world is to limit climate change.

While the United Nations has called for a 45 per cent cut to emissions by 2030, Mr Morrison rejected the case for a higher goal by attacking Labor for promising a 45 per cut at the last election.

Mr Morrison argued voters had rejected the Labor target at the last election and endorsed the Coalition goal of reducing emissions by 26 to 28 per cent, saying this would remain government policy.

The stance raises the risk of sharp criticism of Mr Morrison at the Glasgow summit when other leaders are setting much higher goals for the same year, with United States President Joe Biden promising at least 50 per cent and British Prime Minister Boris Johnson aiming for 68 per cent.

Mr Morrison told the Liberal party room Australia would suffer if it did not set a path toward net zero emissions when trading partners such as Japan and South Korea were moving away from fossil fuels, while he also argued Australia had to stay in step with western allies.

While Energy Minister Angus Taylor did not give the meeting an updated forecast for 2030 or beyond, ministers believe the climate policy could achieve cuts of 32 to 36 per cent and this forecast could be updated to 40 per cent by the time of the next election.

The government will argue the forecasts show it can “meet and beat” its 2030 pledge but will not formalise this with a Nationally Determined Contribution, the formal term for a target at the UN talks rather than a non-binding statement.

Mr Morrison’s statements to Parliament came after Labor leader Anthony Albanese asked the Prime Minister about past Coalition claims including the suggestion electric vehicles would “end the weekend” and that a big battery in South Australia was as useful as the Big Banana in northern NSW.

Rumours of a $20 billion deal swirled through Parliament on Monday but Mr Joyce told Parliament this was wrong.

“I want to dispel this notion that there is some magical number running around. There is not. Just because you read it, doesn’t mean they said it,” he said.

The cost estimate appeared to come from comments from Energy Minister Angus Taylor when he told reporters his climate policy, known as the Technology Investment Roadmap, would spend $20 billion on energy projects. This reflects promises the government has made in the past, not new ones for the Nationals.

Mr Morrison also told Parliament the government’s decision on climate targets would be made in federal cabinet.

“That’s where these decisions are made, all members of the government understand that,” he said.

Mr Albanese moved a motion in question time to call for a commitment to net zero by 2050 to be legislated by Parliament, but the government used its majority to prevent a debate or vote on the question.