‘DWTS’ pro Sharna Burgess is just as interested to see how season 30 plays out as everyone else. She revealed to HL EXCLUSIVELY why Jojo Siwa is her ‘clear frontrunner,’ but she’s not ruling out other celebs.

Dancing With the Stars is just weeks away from its season 30 finale. This season features some of the best celebrity talents the show has seen in years, with multiple perfect scores already earned by some of the pairs. HollywoodLife spoke EXCLUSIVELY with DWTS season 30 pro Sharna Burgess about how she feels about the competition.

“As far as dance ability and execution, the front runner for me is Jojo [Siwa],” Sharna said during an episode of TVTalk on IG Live while promoting her PETA partnership. “I also think she has a beautiful fan base, and it’s about time that we had this. There are so many things around Jojo for me that I feel like she’s a clear frontrunner.” 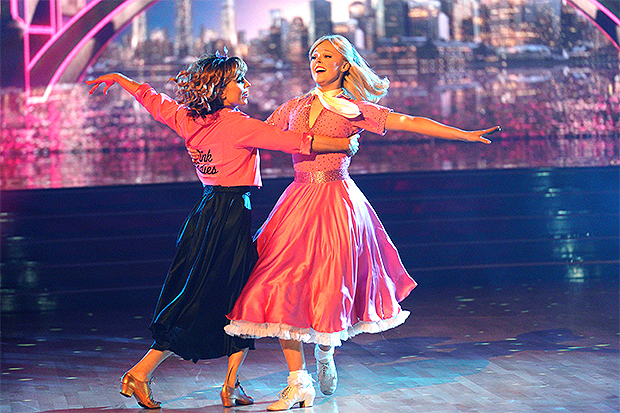 However, with the rise of Iman Shumpert, who just got a perfect score on Horror Night, Sharna thinks the male celebs have a real shot at the mirrorball trophy. “Then there’s this feeling for me that there are so many girls that are super talented this season with dance experience that I wonder if one of these guys is going to come in and surprise everyone and be the dark horse,” Sharna said. “Who knows? Who knew that Iman and Jimmie [Allen] were just going to be so amazing and so lovable each week that you just want to see more of them? These human beings that don’t have dance experience that come in here and do this each week, that’s the beauty of Dancing with the Stars, right? It’s not always the most talented dancer that wins, it is who the people vote for. I don’t know who’s going to go home and who’s going to win, but I think the front runner for me is Jojo right now. And Melora [Hardin]! Melora didn’t have a great score last night for her, but I think she is stunning and I love watching her on that floor. I fall more in love with her every week.”

The DWTS pro specifically pointed out Iman, whose insane lifts with partner Daniella Karagach propelled them to the top of the leaderboard. “I think Iman is the perfect blend of charisma and groove and personality that makes this whole thing just a joy to watch,” Sharna told HollywoodLife. “This season itself has been insane to watch from the first week. It’s always tough to know who’s going to go home at the end of it. It’s so hard!”

Dancing With the Stars did an All-Star season back in season 15. Sharna said she would “absolutely” do an All-Star season if ABC decided to go that route again. “The last one, I wasn’t even a pro yet. Heck yes! Let’s do an All-Star season. That would be amazing. I’m calling in James Hinchcliffe. I feel like if he ever came back, I feel like we’d win it the next time around,” Sharna told HollywoodLife. Sharna was paired this season with boyfriend Brian Austin Green. Dancing With the Stars season 30 airs Mondays at 8 p.m. on ABC.