Sir Keir Starmer was in full tummy-tickling mode yesterday – no mean feat, when the Labour delegates’ bellies have been nourished for days with steins of foaming ale and gut-busting all-you-can-eat breakfasts.

For just shy of an hour he basted his comrades in thick layers of unctuous Left-wing goo, dousing them with treacly talk about hard graft, raisin’ taxes and bashin’ bankers.

Did they gobble the bait down whole? Well, just about. Put it this way: No one booed him like they did last year.

No doubt Sir Keir’s supporters will spin this as the performance of a Prime Minister-in-Waiting. But it was too light on policy detail for that, rich in abstractions and low on specifics. 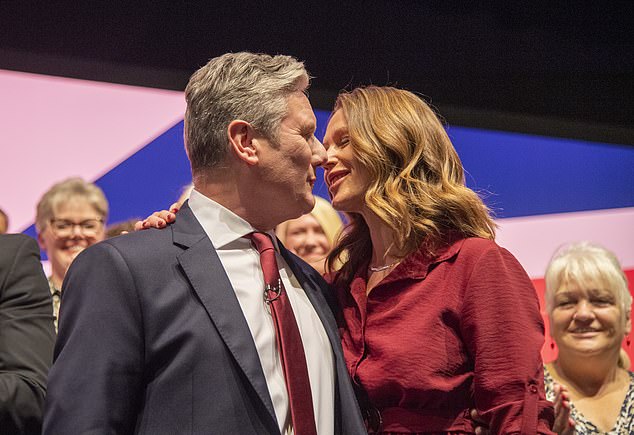 And there remains something oddly frosty about his delivery. For all the schmaltz, I couldn’t help feeling I was listening to a middle-ranking air-conditioning salesman who is particularly pleased by his third- quarter results.

As is customary at conference these days, Sir Keir arrived on stage to a deafening blast of drum beats. On the auditorium screens, an expensive-looking video with high-tech production values showed Starmer out and about meeting voters and mixing wiv da kids.

There was the obligatory tracking shot of him walking along pensively, thinking huge prime-ministerial thoughts.

Yet for all the careful choreo-graphy, his appearance remained characteristically rigid – those unblinking eyes, that moussed swish of hair. Any portrait painter out there looking for the perfect study in constipated angst could do worse than gaze upon the ex-DPP.

There is also the strange matter of the mouth. It kept arranging itself into a tight little smile, as though every facial sinew was being made to work overtime. It suggested a man who had suddenly remembered he may have left the bath running but didn’t want to give the game away.

He kicked off with a joke. ‘After all the changes we’ve made, all the hard work we’ve finally put in, we are finally seeing the results we want. Yes conference, we can say it at last… Arsenal are top of the league!’

Large sections of the auditorium erupted into cheers. Well, a lot of north Londoners do go to the Labour conference. 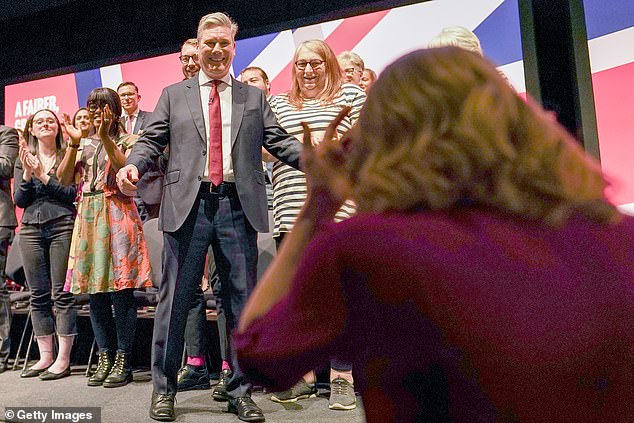 He kicked off with a joke. ‘After all the changes we’ve made, all the hard work we’ve finally put in, we are finally seeing the results we want. Yes conference, we can say it at last… Arsenal are top of the league!’

Soon he was tearing into the beastly Tories over the cost of living. They hadn’t just failed to fix the roof when the sun was shining, he said ‘they’ve ripped out the foundations, smashed through the windows and now they’ve blown the doors off for good measure’. The voice honked like a blocked snorkel.

The crowd lapped it up. Standing ovation after standing ovation, up and down like pistons. On the front row, Ed Miliband was particularly sprightly, keen to catch his boss’s attention.

The only ovation that wasn’t universally observed was when Starmer announced he had rooted out anti-Semitism in the party. The Corbynistas have never quite forgiven him for booting out the sainted Jeremy.

There followed a bit of lachrymose tin-bath stuff, doubtless designed to set off a few Kleenex parps around the hall. We heard about Sir Keir’s working-class upbringing in a pebble-dashed house where his mum and dad ‘worked their socks off’ yet couldn’t pay the phone bill. He could have been describing a scene from one of Ken Loach’s misery-filled plays.

He recalled meeting ‘working people’ who were having to work harder ‘just to stand still’. He wanted the country to be ‘striving not thriving’. Was the Duchess of Sussex drafted in as a scriptwriter?

But whither the big policy reveal? The major announcement was that he would set up a state-owned energy company should Labour win the election.

‘British power to the British people!’ he yelled, prompting a volley of cheers. Shades of Citizen Smith in a Marks and Sparks suit.

Just when it looked as if Starmer might have teetered a bit too far to the Left, some solidly Blairite lines were weaved in towards the end (‘We are the party of the centre ground!’ ‘This is a Labour moment!’) which sounded suspiciously as though they’d come from Peter Mandelson’s venomed quill. Certainly wouldn’t surprise me. His Lordship has been slithering around the conference centre all week.

Culture wars, transport, defence: All went unmentioned. Instead, Sir Keir finished off on an odd note, given surging inflation, promising that Britain would become a ‘clean energy superpower’ and a ‘fairer, greener, more dynamic nation’.

As the music blared again, Lady Starmer was ushered on stage to deliver the customary congratulatory smooch. I’ve said it before, but she is much underused as an electoral asset. Certainly a far more potent vote-winner than anything we heard from her hubby.