STEPHEN GLOVER: I salute Mrs May but she must say when she’s going STEPHEN GLOVER: I salute Theresa May but she must tell us when she’s going to go for the sake of her country and party

For a long time, it has been obvious that Theresa May doesn’t observe the conventions that govern the behaviour of run-of-the-mill politicians.

She can destroy a parliamentary majority, having run a disastrous election campaign. She can suffer three of the biggest defeats in parliamentary history on her flagship Brexit legislation. She can lose numerous Cabinet ministers to resignations or sackings.

And yet our bounce-back Prime Minister survives every buffeting and setback. The world says she must go this time, but she doesn’t. Something propels her onwards. Principle? A belief in her historic destiny? A contempt for the rules of lesser mortals? 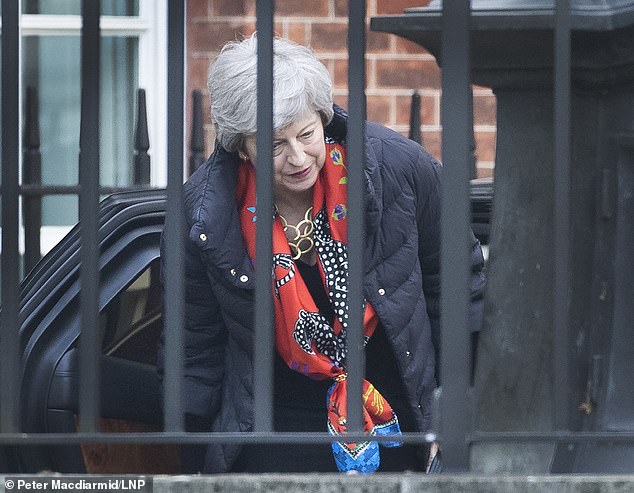 Last week, the Tories had their worst showing in local elections for almost a quarter of a century. In the EU elections on May 23, with which this stricken Government has idiotically saddled us, they are expected to come third or even fourth. Will Mrs May cling on?

In her determination to persist, she is unlike Margaret Thatcher. The real Iron Lady caved in to pressure from the men in grey suits to resign, even though she had just won the first round of a Tory leadership contest by what some reckoned was a comfortable margin.

What will it take for this most obdurate of women to clear her desk? I ask because of reports that Mrs May has decided she won’t stand down until the Conservative Party Conference at the end of September.

More from Stephen Glover for the Daily Mail…

Before that, she intends to try to break the Brexit impasse with one more throw of the dice. Sir Graham Brady, chairman of the 1922 Committee of backbench Tory MPs, said yesterday he expected the EU Withdrawal Agreement, already rejected three times by the Commons, to be brought back within the next two weeks.

Unless there are substantial changes, I’d be surprised if Mrs May received support from Labour, with which the Government has been engaged in fruitless talks about Brexit, or from recalcitrant Tory Brexiteers and the Democratic Unionist Party. Short of a miracle, this has the look of a desperate ploy.

I don’t say this with any relish: barring an astonishing breakthrough, the Prime Minister’s clinging to power for another six months is likely to be bad for the country, her party — and herself.

Without question she has shown huge courage and remarkable resilience. The Withdrawal Agreement, though far from perfect, does at least involve our leaving the EU, which is supposed to be the point of the exercise.

The failure to approve it hasn’t so much been Mrs May’s fault — though she was surely naïve to think the Commons would accept the Northern Irish backstop and our potentially being locked in the Customs Union ad infinitum — but that of fractious MPs who won’t compromise.

So I salute her for battling valiantly. But she seems to have exhausted nearly all her options and, except in the improbable event of Jeremy Corbyn coming to her rescue, will soon be staring at an empty cupboard.

Why not let someone else have a shot? Mrs May’s supporters rightly argue that the parliamentary arithmetic wouldn’t change with another leader, and there would be little prospect of Brussels being more flexible over the Northern Irish backstop.

Nonetheless, a new Prime Minister would bring new ideas and energy (how exhausted Mrs May looks!) and possibly inject a dose of optimism into a country that, Leavers and Remainers alike, is in despair.

This isn’t the moment to judge a beauty parade of would-be leaders, even though some of the male contestants have been showing off their wives, and otherwise busily laying out their wares, while Mrs May goes through the motions of being Prime Minister.

Sir Graham Brady, the chairman of the influential 199 Committee, urged Mrs May to announce a detailed timetable for a departure before the Commons summer recess in July

But I can imagine two or three of them, if elected, bringing a draught of fresh air. They might have qualities of persuasion which the somewhat rigid and unclubbable current occupant of No. 10 lacks.

If Mrs May does cling on until early October, her successor couldn’t be in place by October 31, the current deadline for our leaving the EU. She would probably have to stay on to negotiate a new deadline, assuming it can be done.

Of course, she hopes that by that time she will have brokered a deal which would have taken Britain out of the EU. But in view of what has happened so far, that doesn’t seem very likely.

Far better for her to name a date for her departure immediately after the inevitable rout on May 23. She would still be Prime Minister when President Trump pays his state visit to Britain in early June, but the wheels of a Tory leadership contest would already be whirring.

In fact, July would be the ideal time for such a showdown since throughout much of that month and the whole of August the panjandrums of the EU Commission are to be found sunning themselves in their villas and schlosses.

Only in October will the well-fed and fully rested members of a new Commission re-assemble in Brussels, by which time a new Prime Minister could be safely installed in No. 10, and ready to do battle.

There is another consideration which Mrs May should not ignore. Given that a new leader will have to wrestle with the same parliamentary numbers, he or she may have to call a general election in the hope of winning a workable majority.

Let’s be realistic. Mrs May can’t do that because she is such an unpopular leader. Labour’s poor showing in last week’s local elections showed how vulnerable Jeremy Corbyn is. But Theresa May wouldn’t be able to beat him. It will take a new Tory leader to have any chance of doing that.

My view has long been that Corbyn presents a far greater danger to the prosperity and well-being of our country than the most extreme form of no-deal Brexit. It’s impossible to feel at all relaxed so long as a wounded and, I fear, ineffectual, Prime Minister remains in No. 10.

As for Mrs May herself, she will face only ignominy if she insists on clinging on in defiance of the increasing opposition of Tory MPs and the party faithful.

Yesterday’s meeting of the 1922 Committee edged closer to demanding a detailed ‘road map’ of when the Prime Minister will leave office. She will come under pressure to produce one when she appears in front of the Committee’s executive panel next week.

Meanwhile, Tory grassroots members are to hold a vote of confidence in her leadership on June 15, which seems likely to go against her. Although such an outcome would be non-binding, it would represent a humiliating defeat for the Tory leader.

I understand why Mrs May is still tempted to stay on. It is not really about hanging on to power at all costs. She wants to fulfil what she regards as her duty — taking this country out of the EU — and doesn’t want to stand down until she does that.

The trouble is that she can’t. The moment has almost certainly passed. Someone else should be allowed to have a go. For her country’s sake, for her party’s best interests, and for her own good, she should tell us immediately after May 23 that she is leaving soon.