WUDJANG: NOT THE PAST ★★★★½
Roslyn Packer Theatre, January 18 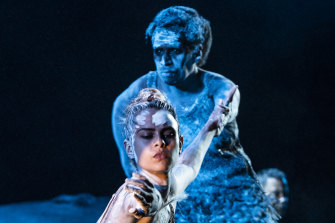 The bones of an old woman are unearthed, giving breath to the ancestral spirit Wudjang. Credit:Louise Kennerley

Stephen Page’s final major work as artistic director of Bangarra Dance Theatre is an epic piece of storytelling, as much in song and spoken word as dance.

It tackles the tragic side of life for First Nations people after the arrival of white settlers in Australia. So, sadly, there is rape, murder, and plunder of land and culture.

The framework hangs on the discovery of ancestral bones as industrial machinery tears into the ground to build a dam. An old woman by name of Wudjang (meaning mother) is unearthed. She is “given breath” and the task of recalling the lives and culture of her ancestors so they would be passed on to today’s generation and beyond.

Elma Kris, for many years a leading dancer with Bangarra and now referred to as an actor, gives a transcendent performance as Wudjang.

Calling on all her dancing skills, she moves through the production like a being from another world, a different time. She provides the pivotal and most moving moments in a truly spiritual characterisation.

Kirk Page pushes the story along in words with energetic drive, often in song that alternates between English and Indigenous language. Elaine Crombie sings powerfully and emotionally, given evocative music composed by Steve Francis and played onstage by a band whose members are also occasionally involved in the action. 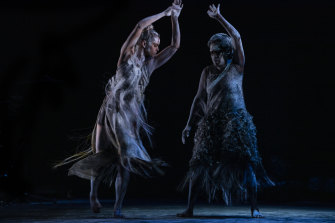 The 17 dancers populate the stage with a range of characters, including sheep. The symbolic shearing of a black sheep is one of the dramatic peaks of the piece, for which words written by Alana Valentine and Page can be found as a useful synopsis in what is a rare treat these days: a printed program.

Dance performances are strong, especially among the men. Page’s choreography contributes to the unravelling of the themes: it is not there just to please the eye.

As part of the larger theatrical whole – in which the Sydney Theatre Company has a role as co-producer – it works well.

Jacob Nash’s relatively simple set is enhanced by Nick Schlieper’s lighting and Jennifer Irwin’s extraordinary range of costumes, even more varied and intriguing in design and construction than usual.

While the essential theme of Wudjang is bound to be depressing, it is not without question. It is challenged by one young character who declares she is of the 21st century and doesn’t want to look back.

As the piece progresses, she comes to understand her past and the production ends in celebration, amidst showers of golden wattle, as Wudjang is returned to country with respect and knowledgeable appreciation.