A model who was repeatedly turned down for jobs because of a birthmark on the right side of her body has praised fashion retailer PrettyLittleThing for refusing to airbrush it out.

Muriel Villera, 28, from Colombia, claims she was once told to use bleaching cream to get rid of the mark on her thigh.

She added that she got sick of seeing images of herself with perfect skin when the reality couldn’t be further from the truth.

But the swimwear model has praised British retailer PLT after the brand refused to photoshop it out in her latest shoot. 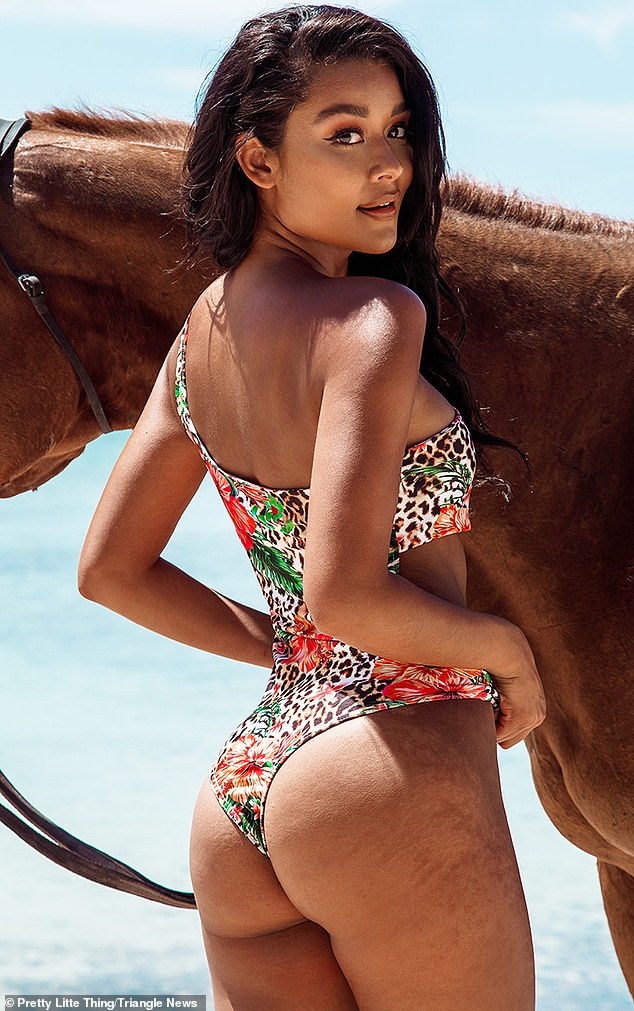 Muriel Villera, 28, from Colombia, has praised fashion retailer PrettyLittleThing for refusing to airbrush out a birthmark on her right thigh

The Manchester-based company claims it has stopped editing out all stretch marks, birth marks and other scars from its site.

Muriel said: ‘I’ve had the pleasure of working in the modeling industry for about 10 years now and throughout that time I’ve lost countless jobs due to my birthmark.

‘My agents would ask me to buy any sort of make-up or bleaching creams to “fix” it.

‘Booking a swimsuit job wasn’t the easiest and when it did happen, my birthmark would be completely edited out. 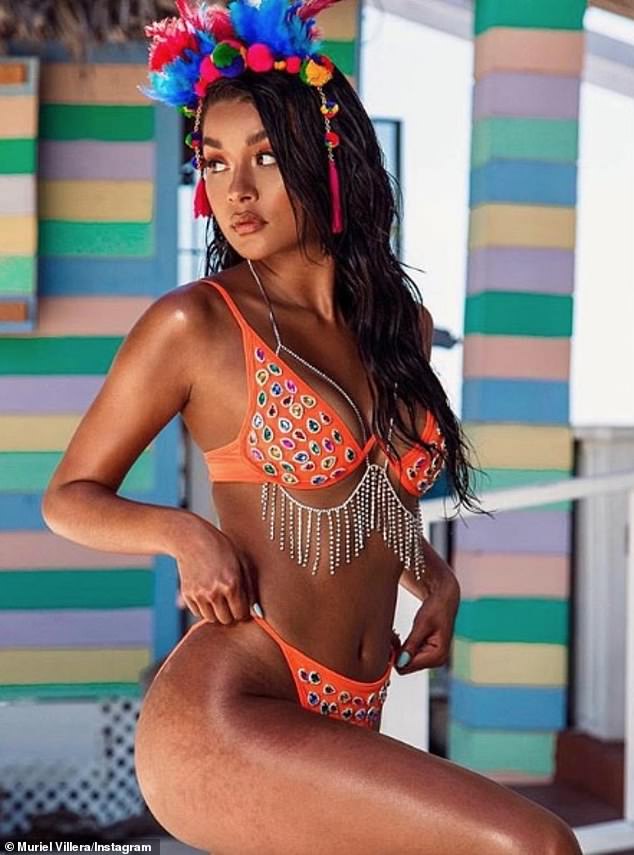 Stunning Muriel, who claims she was once told to use bleaching cream to get rid of the mark on her thigh, uploaded a shot from her PLT swimwear shoot to Instagram 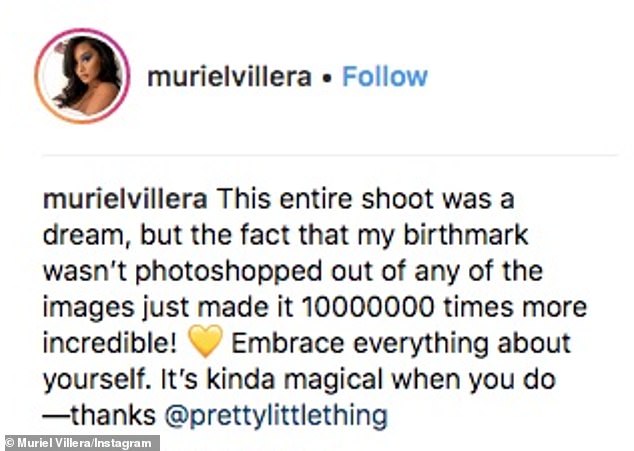 ‘Don’t get me wrong, I know it covers a lot of the right side of my body, but it’s mine and it took me years to love it because the industry made me feel like it was such a curse.

‘Working with brands like PLT has given me hope, though, for the future of modelling and the mental health of those who work in the industry.

‘We are enough and we are more than those jobs we don’t get. I’m so happy I’ve found wonderful clients who just want to add to my magic and not change me one bit.’

Muriel uploaded a shot from her PLT swimwear shoot to Instagram, describing it as ‘a dream’. 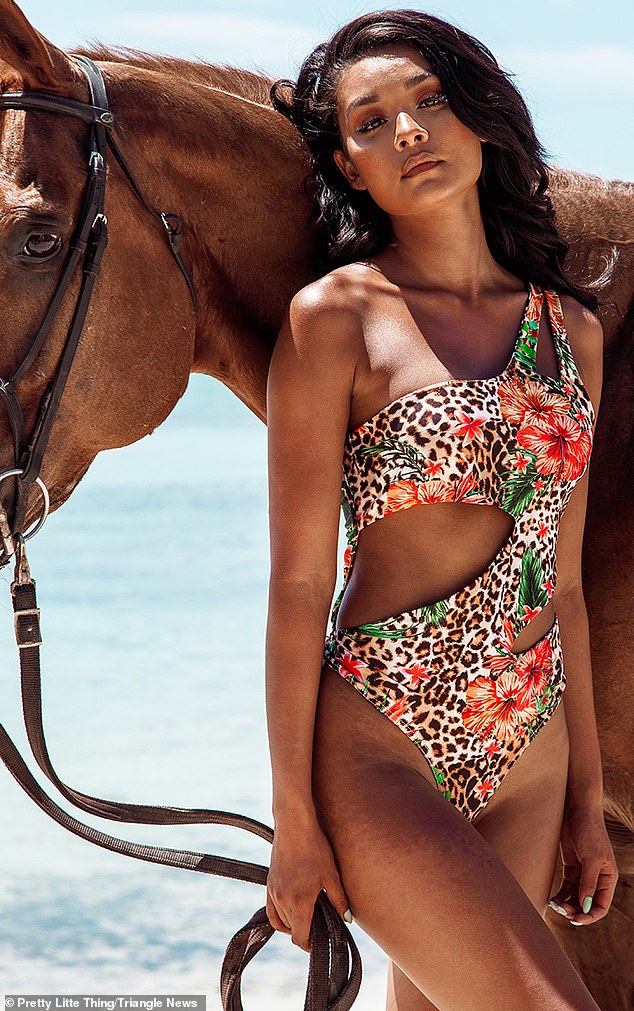 Muriel described the entire shoot as ‘a dream’, adding: ‘The fact that my birthmark wasn’t photoshopped out of any of the images just made it 10,000,000 times more incredible’

She told her 98,000 followers: ‘This entire shoot was a dream, but the fact that my birthmark wasn’t photoshopped out of any of the images just made it 10,000,000 times more incredible!

‘Embrace everything about yourself. It’s kinda magical when you do – thanks @prettylittlething.’

The retailer has been praised recently for its inclusivity, showing clothes on both plus-sized and smaller women. 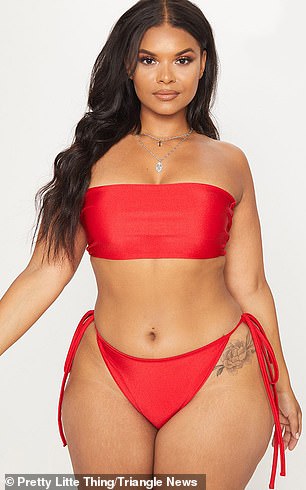 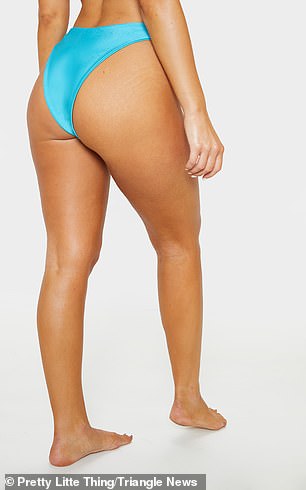 The retailer has been praised recently for its inclusivity, showing clothes on both plus-sized and smaller women and refraining from editing out stretch marks or body markings on its models

After campaigns with celebrities like Ashley Graham and Hailey Baldwin last year, the brand announced it was to begin selling clothes in a UK size 28, using the hashtag £EverybodyInPLT.

A spokesperson for the brand said: ‘We’re aware that our customers want to see real women, hence our decision to not airbrush any stretch marks, birthmarks or body markings on any of our models.

‘Our CEO, Umar Kamani, recently described PLT as ‘a girl’s best friend’ and this decision is a step in the right direction for us to promote being comfortable with the body you’re in.’