Life with four boys began for Kailyn Lowry in full force during the Dec. 8 episode of ‘Teen Mom 2’, when she revealed some scary health issues involving Creed.

Kailyn Lowry was forced to navigate a major health issue during the Dec. 8 episode of Teen Mom 2. After giving birth to baby Creed at home, the mom of four told her producer, Patrick, that her newborn son wasn’t breathing when he entered this world. And to make matters worse, she also learned that he had tongue-tie, which would need to get clipped as soon as possible.

Kailyn revealed how “tired” she was feeling before joking that she should have named Creed “baby difficult” because “he doesn’t sleep, [and] he is just crying if he’s awake.” After saying how frustrated she’s been, she continued explaining that “he eats okay, but he’s tongue-tied so it made it really hard [for him] to latch onto my nipple.”

Then, when the topic of conversation turned to Chris Lopez, Kailyn told Patrick that Chris “bought a box of diapers for Creed when Creed was born, and that was it. He hasn’t seen [Creed] since the week he was born.”

However, to Kailyn’s “surprise”, she said Chris was “very supportive” during her home-birth, which he was present for. “We didn’t argue — it was good,” Kailyn said, but what wasn’t good was when Creed came out not breathing.

“When I was pushing him out, there was a moment where I pushed, and I didn’t feel another contraction. So the midwife was like, ‘You need to push. I need you to push. I need you to do it because’ whatever. So he comes and he’s just completely not breathing. And the look on Chris’ face was just like — [he was] terrified.”

Fortunately, the midwife got Creed breathing again, but Kailyn learned the risks of giving birth at home the hard way. And despite what she was told about Creed being tongue-tied, a doctor later told her (after her chat with Patrick) that Creed wasn’t tongue-tied so no procedure to clip it was necessary. 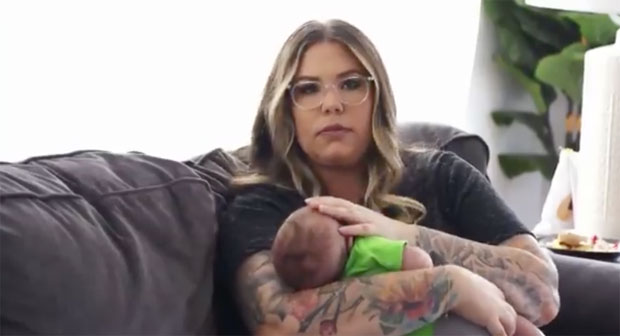 In other Teen Mom 2 news, tensions erupted between Jade Cline and boyfriend (?) Sean at daughter Kloie‘s birthday dinner, when he told her that he couldn’t fathom working while also pursuing his GED two days per week. She called him “lazy” and basically said she wanted him out of her life.

Leah Messer then attempted virtual learning with all three of her daughters, but Addie gave her a hard time when it came to being disciplined, so Leah asked for Jeremy Calvert‘s help over the phone.

Lastly, Briana DeJesus tried to put aside her anger with Devoin for Nova‘s birthday, but she couldn’t stand the fact that he only showed up for the happy times in Nova’s life. Oh, and Chelsea Houska found out she’s expecting a baby girl, while she and Cole DeBoer struggled with sending Watson, 3, to school for the very first time. Especially, following the COVID-19 outbreak.