Thank you for recommending that great new TV show! But please stop it

I was recommended a new television series the other day. I’d love it, apparently. It was exactly my kind of thing, I was assured. I took this recommendation exactly as it was intended – as an act of violence.

There are, simply put, too many shows. Too much to get through. Were the world to collapse right now, we would still have plenty to watch while huddled around a barrel fire wondering exactly how the streaming services are still working in this tortured hypothetical. 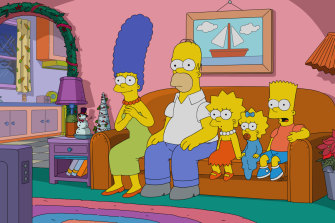 Why do I find myself returning time and time again to the same shows I have watched a hundred times before?

Forget new content, we all have an impossibly long backlog already of things we’ve heard about and always intended to get around to watching. To tell someone there’s a terrific show they’d really enjoy is a rude and vile thing. How dare you care about me enough to wish to bring me joy.

We live in a blessed age for content. We are all little content piggies at the trough. Each day a slew of new entertainment is delivered right to us, more than we could watch in a hundred lifetimes. So, why do I find myself returning time and time again to the same shows I have watched a hundred times before?

Part of this is my fault. I am not interested in expanding my horizons or opening my heart. Psychologically, I am a cat who has found a small patch of sunlight. I am the kind of person who finds a meal they enjoy at a cafe and will order it every single time I visit until the cafe closes or I die. I am not a thrill seeker, I am a creature of comfort. A boring loser.

One of the worst parts of the streaming revolution is that now media outlets will perfectly cater for the worst of these instincts. They don’t care what you watch, they care that you’re watching and that you’re staying subscribed so you can watch again and again and again. They algorithmically deliver the same junk you watched yesterday and five years ago while cleverly making absolutely garbage new content to justify your instinct that you were right to never venture away from home.

We don’t discuss just how unpleasant modern streaming apps are to use. Choice paralysis doesn’t quite describe the feeling. Supermarket shelves can be overwhelming but the boxes of cereal don’t start shouting at you when you take too long to choose one. Or, if they do, you have bigger problems than cereal.

A benefit of terrestrial television is that someone else had the wheel. You’d still receive a nicotine patch of Simpsons reruns but eventually you’d be forced to engage with something new. Would that be good? Doesn’t matter. Television wasn’t good or bad, it was on and that’s all that was important. Similarly for music, it is so easy to load up a playlist of songs that we’ve convinced ourselves are still absolute fresh bangers while trying to avoid the little indicator in the corner that says the album dropped in 2011.

The retreat to nostalgia is a widespread phenomena increasing over the last couple of years, almost as if something incredibly traumatic has happened to us all that we’re struggling to comprehend. I will not be speculating on what that might have been. Suffice to say, we are all very tired. Everything happens so much. So when the chance to actually relax presents itself, we want to slip into something familiar and comfortable. No surprises, please.

This isn’t an argument that things were better way back when. On the whole, they probably weren’t. One of the recurring questions about the form of comfort food rewatching is whether something holds up. Most often, the answer is not really. Particularly with comedy it’s hard to look backwards. These programs tend to be a bit slow, or a bit dull, or a bit wildly, insanely transphobic out of nowhere.

Maybe the problem is that contemporary art deals with contemporary times and frankly we are already struggling to keep up with everything around us. I cannot express the deep, bored sigh that strikes whenever a piece of art attempts to reference the coronavirus or the Trump presidency. How dare you speak to the times in which we all live? So what if we’re all passengers drifting together through this thing called life trying to understand the world around us and be understood by the people around us? Don’t talk about it. That’s boring. Have some dignity and quietly suffer.

Yes, of course, I have ventured outside of my little bubble on occasion. Tentatively deciding to give something a go and being disappointed ruins the night but gives you the great satisfaction of validating your prejudices – and what can ever feel better?

It’s wrong to pretend like there’s no joy to be found out there. Of course there is, we live in a golden age of content as we’re constantly told by the distributors of that content. But that itself leaves a bitter taste in my mouth. What am I supposed to do, continue trying new things and enriching my life in fun and interesting ways? No thanks. It’s like finding out that exercise and eating right actually does help your physical and mental wellbeing. How utterly annoying.

So, since I am capable of noticing my bad habits but as always unwilling to put in even the slightest effort to change them my only recourse is justification. Is it so bad to wallow in the familiar? Variety may be the spice of life but people can still survive on boiled chicken. As a wise man once said on a show that was broadcast when I was three years old yet is constantly at the top of my rewatch pile and somehow still has an absolute chokehold on millennial culture in general, the lesson is never try.

To read more from Spectrum, visit our page here.