As fantastical art duo The Huxleys walk through Carriageworks dressed in glitter, sequins and brocaded corsets with mammoth petal-like collars shafts of sunlight ripple across their bare buttocks.

But, those cheeks are missing something.

In a nearby large-scale photo, part of the Huxley’s multi-disciplinary exhibition Bloodlines, their derrieres stream lengths of gold foil fluttering in the breeze. 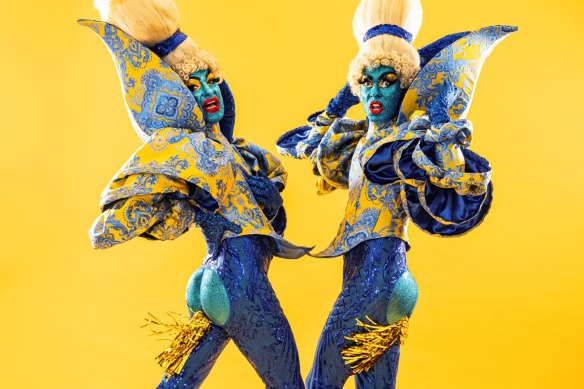 Titled Leigh, the image is the Huxleys’ tribute to Australian designer and artist Leigh Bowery, whose multi-faceted career of outlandish costumes and wild performances once included an onstage enema.

“The photo is our cheeky tribute to that,” says Will Huxley, partner in life and art with Garrett Huxley. “It was really quite uncomfortable. But it was fun.”

Part of Sydney Festival, and curated by Jacob Boehme, Bloodlines, which honours legendary artists lost to HIV/AIDS, is headlined by a series of vivid self-portraits along with a quilt work and two films. 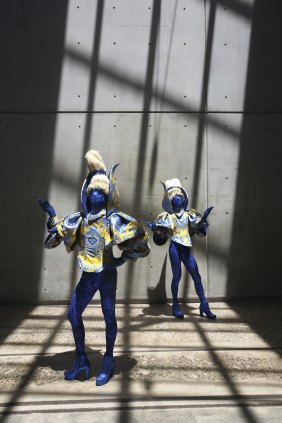 The Huxleys are continually on the hunt for new material for their costumes.Credit:James Alcock

For Will and Garrett, who grew up feeling out of place as young queer people in Perth and the Gold Coast respectively, these figures of art, music, design and nightlife provided hope and something to dream of.

“We wouldn’t be here as artists without them,” Will says. “And we’ve always wanted to pay that debt back because it was so devastating losing them as they were so young.

“At the age we were, AIDS was such a huge thing. I was so full of fear as a young queer person coming out at the time that people were still dying.

“This show is like a church and they’re holy cards but they’re queer saints. We’re saying these amazing voices, who fought so hard when it wasn’t easy to be their true selves, they’re still with us. We wanted to keep them alive.”

The Huxleys also see Bloodlines as a way to introduce young queer people to pioneering LGBTQ artists from the 1970s and 80s.

“One of the beautiful things about this exhibition is the conversations we’re having,” Garrett says. “We’re telling people about these artists and they’re telling us about Australian artists we haven’t heard of.”

One artist is First Nations dancer Malcolm Cole who dressed as Captain Cook to re-enact the arrival of the First Fleet in the first Aboriginal and Torres Strait Islander float at the Sydney Mardi Gras in 1988.

“And he had a white man pulling his boat,” Will says.

The Huxleys, who began collaborating after meeting in 2006, create their work in a Melbourne studio filled with fabric, art materials and sparkly embellishments. They regularly reuse costumes but a continual hunt for new textiles stretches from the US to the aisles of dance wear outlets and closed-down sewing shops binning stock.

“Our friend, a really glamorous woman in heels, told us they’d chucked all this fabric into dumpsters,” Will says. “She was in there with us pulling it out and saying, ‘You gotta get in quick’.”

The Huxleys are creating more quilts for Bloodlines in two weekend “Stitch n Bitch” sessions with talks from artists including William Yang. People can submit their heroes for depiction on the quilts.

“We want to celebrate the joy these artists brought to us,” Garrett says. “Hopefully, it gives some joy to people that see the show.”

The Huxleys: Bloodlines runs until March 5 at Carriageworks.