The most popular shows and movies on Netflix in 2020

An entitled American in Paris, a martial arts protege, an eccentric tiger keeper and a chess prodigy – these are the characters that have kept us company during COVID-19.

We have been streaming more television than ever since the coronavirus pandemic hit, and now Netflix Australia has revealed which shows we’ve sunk the most socially-distanced hours into.

The Queen’s Gambit, a rousing coming-of-age mini-series starring Anya Taylor-Joy as an orphan who becomes a chess sensation, has been crowned the most popular TV drama of 2020. 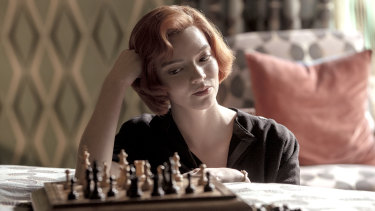 Darren Starr’s glossy Emily in Paris might have had the French choking on their croissants thanks to Lily Collins’ portrayal of an American discovering her joie de vie, but that didn’t stop the show from becoming the best watched comedy.

A receipe for 1980s nostalgia, Karate Kid spinoff Cobra Kai was the most popular action series. Too Hot To Handle, which transported us to a steamy tropical island, was the most watched reality program. Tiger King, about zoo keeper Joe Exotic in America’s south, topped the documentary category.

Netflix measured the popularity of its titles from January through to the end of last month, which explains why season four of The Crown, wasn’t knighted best drama.

The data shows anime viewing surged 90 per cent in the middle of the year compared to January and February. This can be partly explained by the fact that Netflix Australia snapped-up the streaming rights to 21 Studio Ghibli films earlier in the year.

Average viewing hours for thrillers jumped 70 per cent, while Korean dramas and reality TV were both up by 40 per cent. Overall, Netflix Australia recorded a 15 per cent increase in average monthly viewing hours over the same period across all genres and categories.

Pop culture expert Dr Lauren Rosewarne, from the University of Melbourne, suspects shows such as The Queen’s Gambit and Emily in Paris performed well in Australia because their lightness offered an escape from the challenges of coronavirus.

“Both are relatively uncomplicated. Neither are disturbing or depraved or offering up content that will only add to our 2020 woes,” Dr Rosewarne said.

“In a year where Australians have been stuck at home and unable to use our passports, both series offered us vicarious travel to exotic locations. [To] add to this, we got to ogle glamorous fashions observed while we are at home in pyjamas.”

Dr Rosewarne said it was also noteworthy that women were the protagonists in the most popular comedy series and the top-rating drama.

“Female-centred narratives are doing well in a climate where we’re becoming increasingly concerned about representation and diversity,” she said.

The most popular TV shows on Netflix Australia in 2020

The most popular films on Netflix Australia in 2020