The rise and rise of Tony Armstrong, TV’s most popular new star

It’s a very specific type of person who has the charm to reduce Natalie Bassingthwaighte into a pure display of exultation and praise live on stage. Tony Armstrong – charismatic, hardworking and incredibly popular – is exactly that type of person.

From jubilating celebrations with sports fans on live television, through to delivering bad news with a smile, and using his platform to speak out against racism, the 32-year-old has quickly made a name for himself as a fresh and versatile television personality.

A proud Barranbinya man, Armstrong is relatively new to the world of TV presenting. He began filling in for sports presenter Paul Kennedy on the ABC’s News Breakfast in early 2020, before being given the full-time role in June last year. 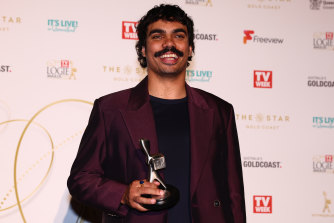 Logie winner Tony Armstrong: one of the best received guests of the night.Credit:Chris Hyde/Getty Images

On Sunday night he was honoured with the TV Week Logie Award for most popular new talent, after already taking to the stage alongside tennis star Dylan Alcott, to present the award for most outstanding sports coverage. Armstrong was the first and only host during the ceremony to give an acknowledgement of Country.

Armstrong began his Logies award acceptance speech with a shout-out to “the old cheese,” mother Margaret, who brought him up as a single parent in Sydney’s Fairfield and Cabramatta.

Growing up, “Saturdays used to be the best day,” Armstrong told radio presenter Zan Rowe in 2021.

“Saturday morning, [I’d go to the] Aboriginal Dance Theatre in Redfern. After that, mum would take me, because mum’s a school teacher, to an hour and a half of study. But then we used to get to go to IMAX in Darling Harbour after.”

Armstrong and his mother later moved to Brocklesby, a rural farming community near Albury (“a bit of a culture shock” from Sydney’s multicultural suburbs). It was there where he became “desperate to play sport”.

“I’m an only child. I loved … how team sports can bring you a sense of collegiality. You join a sports team,” he said, and “straight away you’ve got 22 friends.”

The sport he fell into was AFL. Armstrong spent his high school years boarding at Assumption College, a school known for its steady supply of AFL stars including Brownlow winner Shane Crawford.

At boarding school, Armstrong went from a town with no kids to play with (they were out farming when he got back from school) to having friends 24/7.

Drafted in to the Adelaide Crows aged 18, Armstrong made his AFL debut in 2010. But “consistency proved an issue,” the club said, and the player was traded to the Sydney Swans the next year.

After being traded again to Collingwood, Armstrong ended up walking away from the sport at 25, realising he was “not really doing that well”.

“One day I was asked to provide some special comments for the National Indigenous Radio Service [NIRS],” he said. The NIRS is a government-funded satellite program feed to mainly Indigenous radio stations across the country. “And I seemed to have a bit of a knack for it,” he said. He became the first Indigenous person to call an AFL game on commercial radio in 2019.

“If I hadn’t started calling AFL football, I wouldn’t have ended up here at the ABC,” he said on Sunday night, during his acceptance speech.

And it is here at the ABC where Armstrong has grown into a household name. From delivering Tony’s Terrible News on The Weekly and hosting his own show, A Dog’s World, to speaking out against Indigenous incarceration, and joking at unfortunate tongue-twisters, nothing seems off limits for the man who admits to having “a bit of a quirky personality”.

It’s not hard to see why he is loved, and why he was the clear and deserved favourite for the most popular new talent award this year.