Since Sydney’s inaugural Vivid Festival in 2009, its famous light projections have become brighter, splashier, more detailed and defined. In a word, they pop.

That dazzling clarity is the result of sometimes subtle and at other times giant leaps in technology that have enhanced the public’s visual experience. 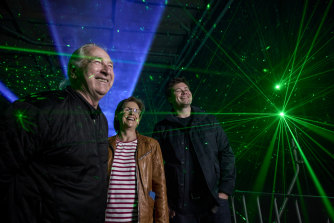 Michael Hassett, festival director Gill Minervini and Richard Neville from Mandylights (left to right) at the preview of the Convergence installation in Haymarket.Credit:Brook Mitchell

Technology is shaping the future of festivals, and Vivid is no exception, said Michael Hassett, founder and managing director at TDC, who has been bathing Sydney’s iconic landmarks in colour since 2009.

Operating out of a warehouse in Alexandria, TDC supplies the 110 projectors that will wallpaper the Sydney Opera House, Customs House, and another 25 sites.

Over 23 nights the company will screen 200 total hours of moving images, equivalent to running every movie that has ever won an Academy Award for best picture. That’s 230,000,000 pixels displayed each evening.

In the early years of Vivid, projectors were only capable of emitting 3000 to 5000 lumens – or visible light to the human eye. “Now we are talking in tens of thousands of lumens,” Hassett said. “And the other part of the development is that we’ve gone from extremely power-hungry projectors to super-efficient projectors. It’s the difference between a 20-watt light bulb and a 100-watt light bulb.”

New software and hardware developments have brought to life images in ultra-high-definition and that in turn has pushed the boundaries for artists and content producers.

“We’ve been involved for over 10 years and in the initial periods, our projectors weren’t very bright,” Hassett said. “The quality, the intensity, just the sheer brilliance of projection was nothing like it is now.”

Another artistic team using clever technology is Mandylights. The Inner West staging lights company has synched the colours of the Sydney Opera House sails with those on the Harbour Bridge, ferries and cruise vessels to create ripples of single colour across the harbour. 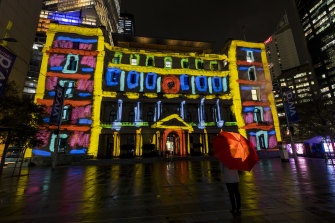 A Ken Done projection on Customs House is among the highlights of this year’s Vivid.Credit:Anna Kucera

The colours of this Vivid flotilla will correspond with lights atop 21 city buildings and 200 searchlight beams across Circular Quay.

In addition, a game-changing app will allow audiences to stream soundtracks of selected projections on their smartphones from a distance. 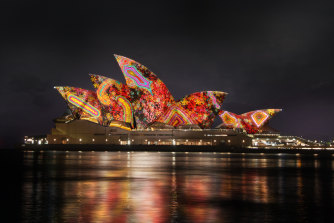 Lighting of the Opera House sails.

“Part of Vivid’s DNA is technology, creativity and innovation and each installation is a blend of all three,” Minervini said. “What Vivid gives artists is the opportunity to present their work to a much larger audience through a variety of mediums.

“A traditional artist like Ken Done can work with digital animators and see it come to life on Customs House. Static works can be animated and move. Advances in technology always add to the experience, not only in terms of installations but this year in the light walk we have full LED lightboxes standing in as information kiosks.”

TDC checked in projection equipment at each location in April and the first on-site technical tests and line-up began on May 16, ahead of Vivid’s opening at dusk on Friday. Projectors need to align to the exact millimetre, Hassett said.

“The MCA is always quite difficult because the trees grow every year,” he said. “Probably the most challenging site is the north-eastern pylon of the Harbour Bridge because the site we have to project from is a little remote in that we have to cross a tiny concrete bridge to get to it and take everything across that – scaffolding, the media towers, generators and media servers – and it’s also on an acute angle. We’re on a 45-degree angle both horizontally and vertically.”

Once installed, Hassett usually crosses his fingers for dry skies. “Wind and rain are not our friends. I jokingly call us the rainmakers. If ever there was a drought again in Australia, and we need it to rain, we’d organise some outside projection.”

NSW Minister of Tourism Stuart Ayres said it takes months of preparation and planning to deliver an event the size and scale of Vivid Sydney. “I want to thank the hundreds of people who have been working behind the scenes for months to put on Australia’s largest event for everyone to enjoy, including our curators, performers, security teams, emergency services, technicians and volunteers,” he said.