The Video Of J.Lo Walking In On Katy Perry Changing Into Her Burger Met Gala Dress Is Funny You know, there’s a lot of things I wonder about the Met Gala, like what happens once celebs go inside? Sure, I get to see all my favorite celebs pull up on the red carpet in their most fashionable outfits, and while that is definitely entertaining, I can only imagine it’s even more interesting inside, especially in the bathrooms. Like, how do they get changed out of their intricate red carpet fits to their inside outfits? With the 2019 theme being "camp," celebs have truly gone to the extreme. For example, Katy Perry wore a burger costume — with lettuce, tomatoes, pickles, and all. It was inevitable that Perry would have to use the bathroom and change out of her costume at some point, and when she did, one famous face caught her: Jennifer Lopez. The video of J.Lo walking in on Katy Perry changing into her burger dress was everything you’d expect — incredibly awkward, but also hilarious.

Perry’s stylist, Jamie Mizrahi, captured the interaction and shared it on her Instagram Story. In the video, Perry seemed to have gone for a bathroom break because she was stripped down to just her green lettuce dress, burger shoes, and toothpick cap (it sounds inconceivable, I know). She was beginning to slip back into her burger costume (which looked like a massive struggle, tbh), when J.Lo casually came strolling in and witnessed the whole thing in front of her. Awkward for them, but extremely funny to us (sorry, Katy and J.Lo). The timing couldn’t have been more perfect.

Watch the moment below:

Well, that answers my question about what goes on in the bathrooms. Just like senior prom, right? I just love how J.Lo acted like it was just another day in the bathroom as if Katy Perry wasn’t right in front of her shimmying her way into a massive cheeseburger.

Honestly, celebs aren’t that different from us, just replace $500 gowns with (probably much, much more expensive) burger costumes.

Katy Perry wasn’t originally wearing the burger costume at the Met Gala. When she arrived, she wore a pretty glamorous chandelier costume that literally lit up the red carpet. It gave me major Beauty and the Beast vibes (Lumiere, anyone?). Definitely the opposite of her burger getup, but still camp nonetheless. It got me thinking, did her and Zendaya coordinate their outfits? The Spider-Man: Far From Home actress arrived in a Cinderella-inspired outfit that also came with its own dazzling display of lights. 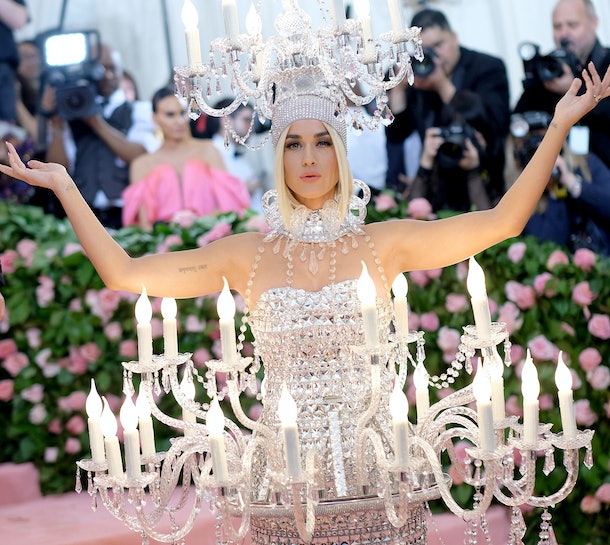 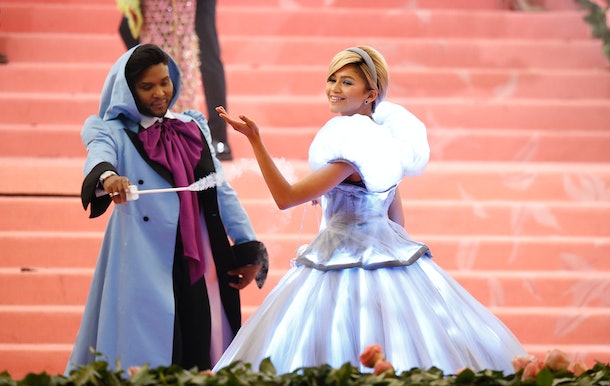 At least now I know what Perry meant by her tweet the day of the Met Gala. She wrote, "First we set the table, and then we dine." The singer has a track record of attending events in the most extravagant costumes, so I didn’t really know what to expect from her at the Met Gala. With the theme being "camp," I was even more stumped. Seeing the images of Perry’s shoes side-by-side make me think of how no matter the outfit, Perry can rock pretty much anything – even a burger costume. It’s all about confidence, guys.

The 2019 Met Gala was surely one for the books, and I can’t wait to see what Perry and other celebs have in store next year.