The woman behind Charlie Watts: Devoted wife of 57 years Shirley

The woman behind Charlie Watts: Devoted wife of 57 years Shirley met the drummer as a sculpture student, stayed by his side as the Stones shot to fame and ‘saved his life’ when he battled drugs before they retreated to a quiet life in the country

Legendary drummer of The Rolling Stones Charlie Watts, who died at the age of 80 on Tuesday, has left behind his wife of 57 years Shirley Ann Shepherd, who he remained loyal to throughout their marriage – despite the temptations of fame.

The London-born drummer met his wife in 1961 during his first rehearsal with Alexis Korner’s Blues Incorporated, where he gigged as a drummer while working a day job at an advertising agency.

He married Shirley, a sculpture student at the Royal College of Art, in 1964 before The Rolling Stones shot to superstardom – who he had joined a year earlier.

In a bid to avoid the limelight, the couple opted to live a quiet life together in a rural village in Devon, where they owned an Arabian horse stud farm – and last year rescued a greyhound from an Oxford animal sanctuary.

And the secret to their successful marriage? ‘It’s because I wasn’t really a rockstar,’ Charlie once famously said.

During an interview with NME, he explained: ‘I don’t have all the trappings of that. Having said that, I do have four vintage cars and can’t drive the bloody things.’ 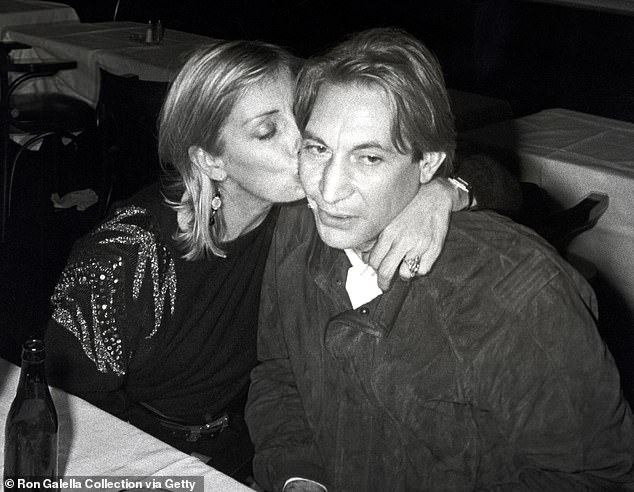 Legendary drummer of The Rolling Stones Charlie Watts, who died at the age of 80 on Tuesday, has left behind his wife of 57 years Shirley Ann Shepherd, who he remained loyal to throughout their marriage. Pictured, March 1971 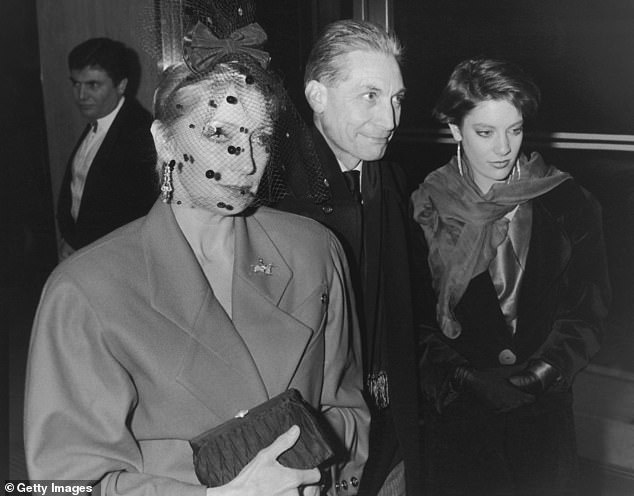 Drummer Charlie Watts of the Rolling Stones with his wife Shirley and daughter Seraphina at the Grammy Awards at Kensington Roof gardens, London, 27th February 1986 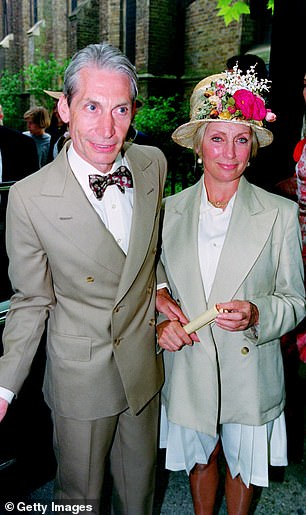 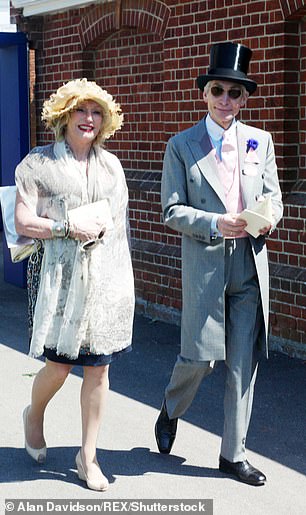 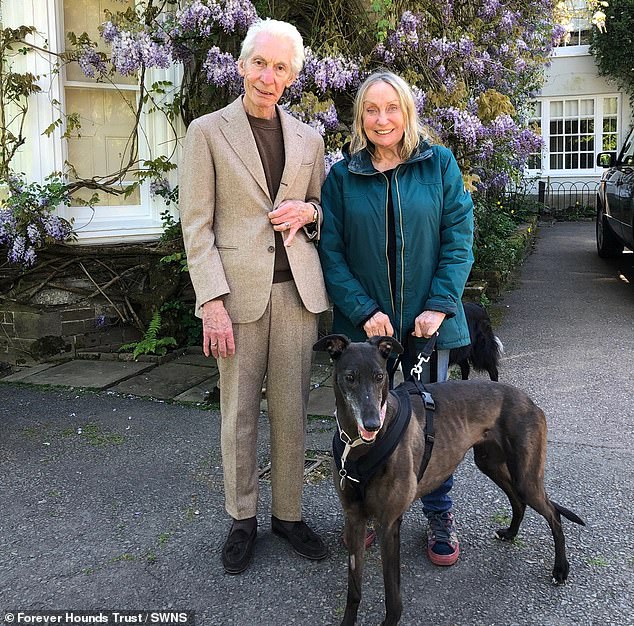 Pictured: The last image of Charlie Watts with his wife Shirley and their rescue greyhound Suzie who was rescued from Forever Hounds Trust

Unlike his bandmates Mick Jagger and Keith Richards, the legendary drummer  managed to stay out of the tabloids.

‘I’ve never been interested in doing interviews or being seen,’ he told the publication. ‘I love it and I do interviews because I want people to come and see the band. The Rolling Stones exist because people come to the shows…’

While the band were never short of groupies, with some of the members enjoying notorious affairs with supermodels and actresses, Charlie remained ever-faithful. 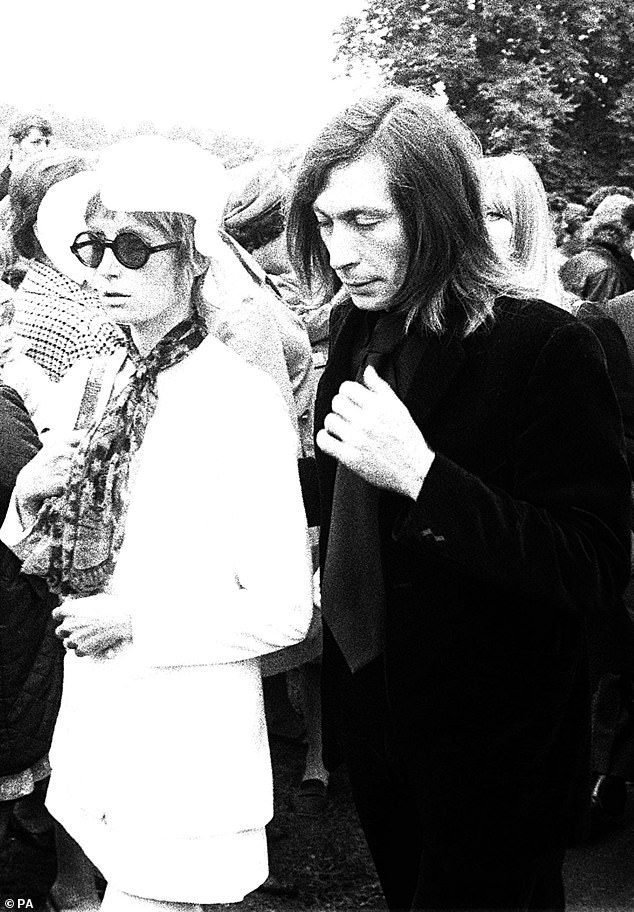 Charlie Watts of the Rolling Stones and his wife Shirley at the graveside of Brian Jones, former guitarist with the group, whose funeral took place in Cheltenham., Gloucestershire on 10 July 1969 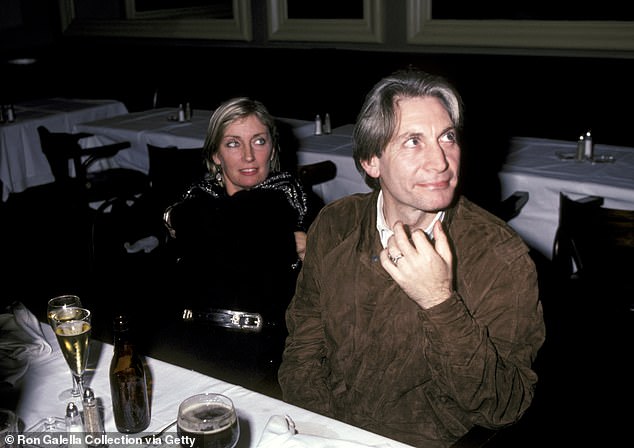 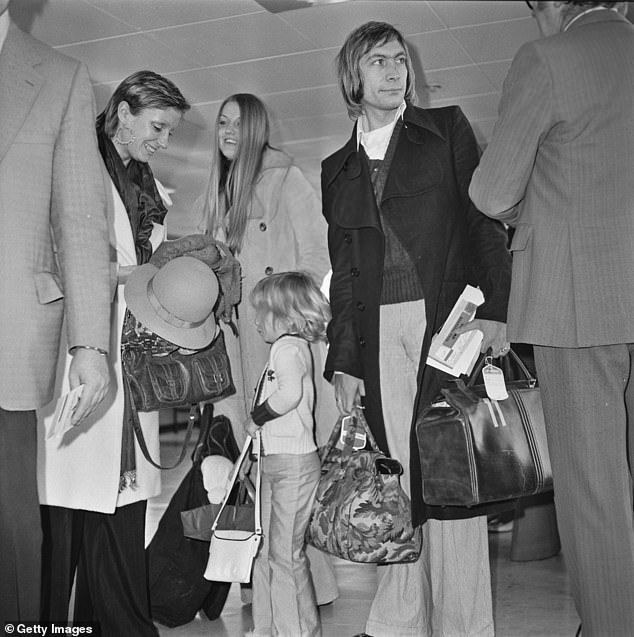 ‘She is an incredible woman,’ Charlie once said, speaking of his wife. ‘The one regret I have of this life is that I was never home enough. But she always says when I come off tour that I am a nightmare and tells me to go back out.’

Recalling in his memoirs a band meeting in 1965 when all the Stones, then getting to grips with the first experiences of super stardom, compared how many groupies they’d slept with in the past two years, bassist Bill Wyman said: ‘I’d had 278 girls, Brian [Jones] 130, Mick about 30, Keith 6, and Charlie none.’

And in Robert Greenfield’s STP: A Journey Through America with The Rolling Stones, which documented the group’s 1972 American Tour, the band were believed to have been invited to the Playboy Mansion.

However, Charlie’s eyes were reportedly more focused on Playboy mogul Hugh Hefner’s game room than any of the stunning women throwing themselves at the band members. 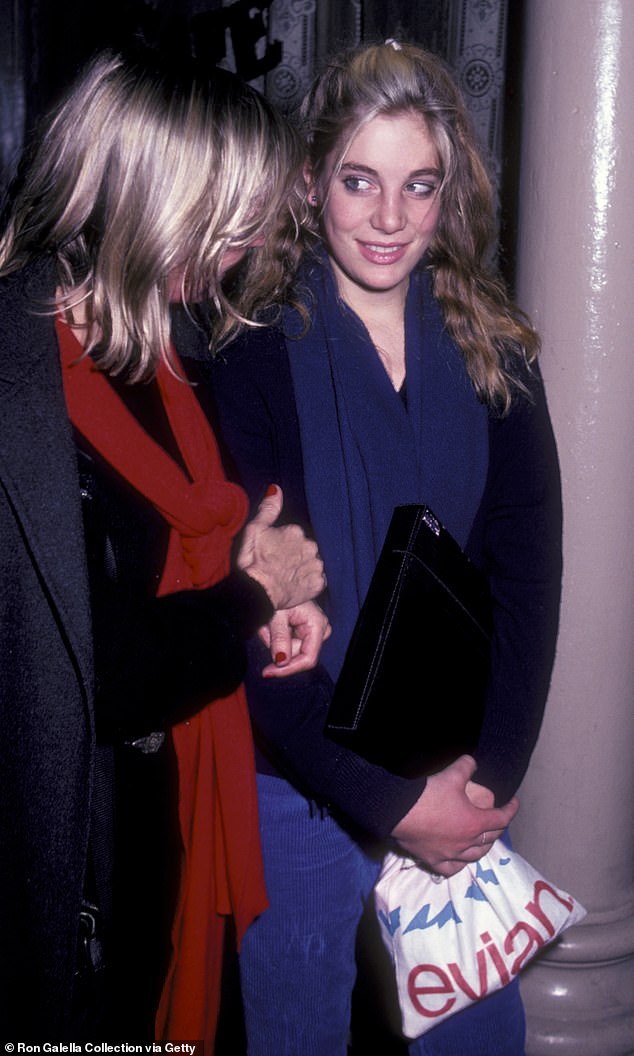 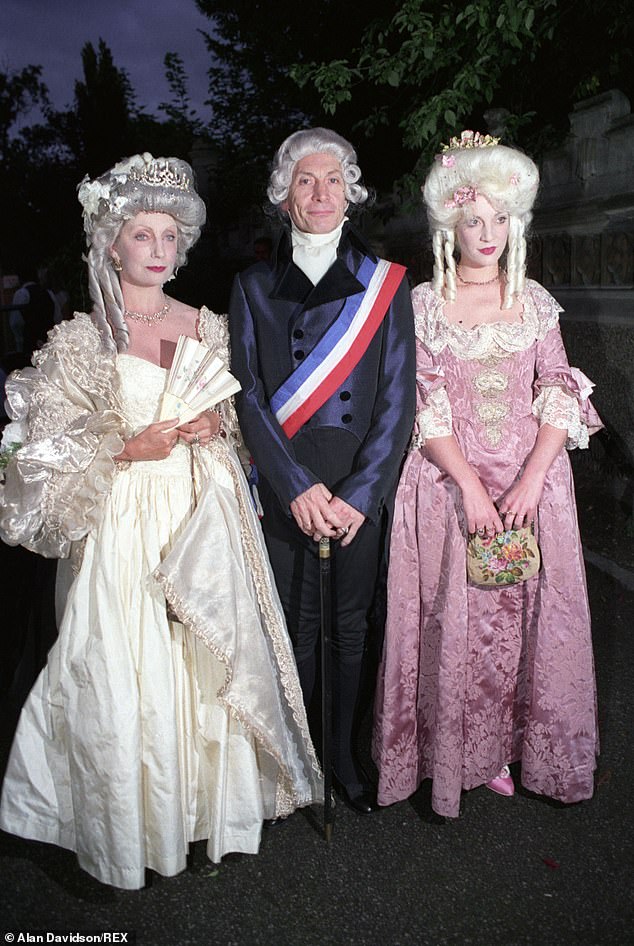 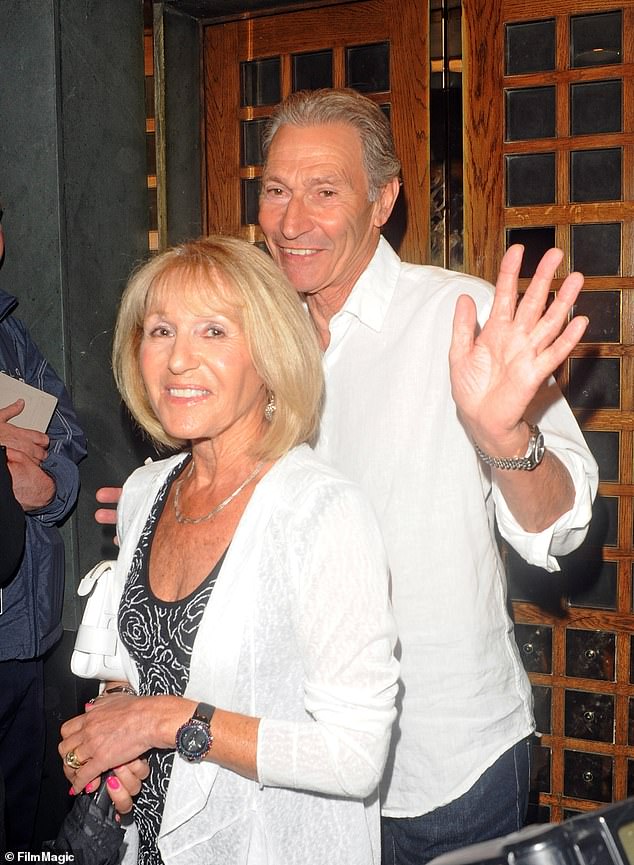 Charlie and Shirley waved for the cameras when they were spotted on August 13, 2012 in London

‘I’ve never filled the stereotype of the rock star,’ he explained. ‘Back in the ’70s, Bill Wyman and I decided to grow beards, and the effort left us exhausted.’

But it wasn’t all plain sailing for the drummer, who has credited Shirley and their daughter Seraphina for saving his life when he appeared to get swept up in one aspect of the rock and roll lifestyle – drugs.

Speaking of the early Eighties he said: ‘I became totally another person. At the end of two years on speed and heroin, I was very ill.

‘My daughter used to tell me I looked like Dracula. I nearly lost my wife and everything over my behaviour. I went mad, really. I nearly killed myself.’

Charlie – who was in his mid-40s – revealed that it was only when he broke his ankle when he was playing at Ronnie Scott’s, that he had a wake up call and realised he had to get straight. 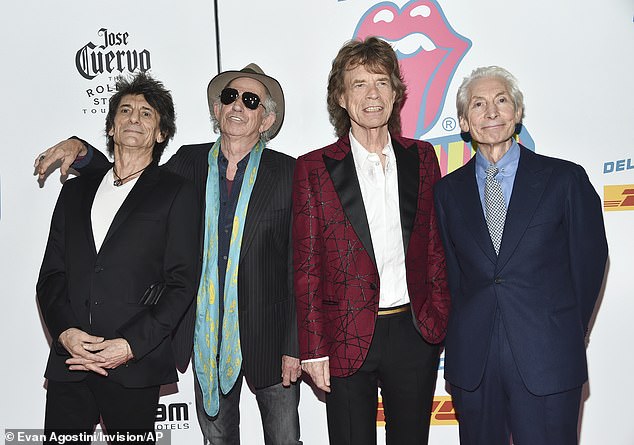 Members of the Rolling Stones, from left, Ronnie Wood, Keith Richards, Mick Jagger and Charlie Watts at the opening night party for “Exhibitionism” at Industrial in New York on 15 November 2016 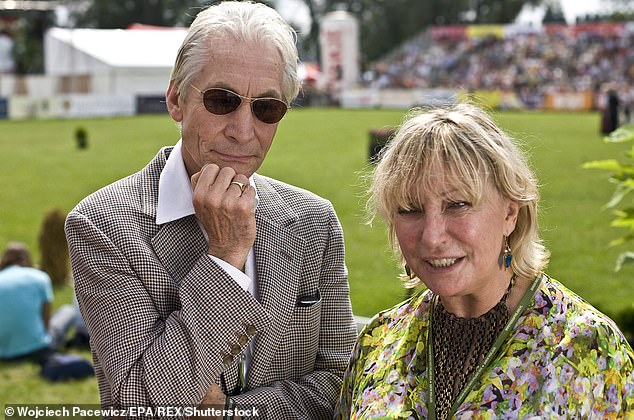 ‘I just stopped cold — for me and for my wife. It [drink and drugs] was never me, really,’ he said.

Richards also gave him a stern talking to.

‘I passed out in the studio, and that to me was a blatant lack of professionalism. Keith picked me up — this is Keith, who I’ve seen in all sorts of states doing all sorts of things — and he said, ‘This is the sort of thing you do when you’re 60,’ he explained.

On Tuesday, Watts’ London publicist, Bernard Doherty, said in a statement: ‘It is with immense sadness that we announce the death of our beloved Charlie Watts.

‘He passed away peacefully in a London hospital earlier today surrounded by his family.

‘Charlie was a cherished husband, father and grandfather and also as a member of The Rolling Stones one of the greatest drummers of his generation.

‘We kindly request that the privacy of his family, band members and close friends is respected at this difficult time.’